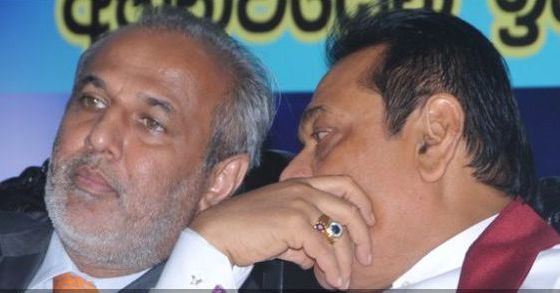 The Parliamentary Group of the Sri Lanka Muslim Congress(SLMC) met at the Colombo residence of party leader and Justice minister Rauff Hakeem on Monday June 10th 2013 and unanimously resolved to express opposition to moves by the Rajapaksa regime to bring about changes to the Constitution curtailing further the powers of devolution allocated to the Country’s Provincial councils under the thirteenth Constitutional amendment.

National list MP and SLMC secretary general MT Hasen Ali when contacted on the telephone stated that the party’s parliamentary group had arrived at a unanimous decision of opposing moves to change the Constitution regarding the provisions of the 13th amendment.

Mr. Hasen Ali said that the party would be writing officially to President Rajapaksa informing him of the SLMC decision before the next cabinet meeting scheduled for Thursday June 13th. Party leader Rauff Hakeem is expected to convey the reasons for the party decision directly to the President and other cabinet ministers on that day

Explaining the reasons for the decision Mr.Hasen Ali said that the pros and cons of the contemplated move had been intensively scrutinised and discussed by the party MP’s before reaching a unanimous decision. He said that there was practically no difference of opinion among MP’s on the matter as each of them felt that they could not support the Govt on this crucial issue.

The SLMC secretary general stated that all the Parliamentarians were bound by the mandate given to the party at its 24th general convention held in Dehiwela on December 29th 2012. Over 1000 delegates had met at the S de S Jayasinghe hall and formulated a mandate that was endorsed unanimously.

A key feature of that mandate was that the party should not in any way support measures enacted or proposed by the Govt to dilute devolution or restrict the powers of the provincial councils.

“ The proposed amendment seeks to circumscribe devolution and reduce the powers of the provincial councils. We cannot support that move as it is against the mandate given at the party convention. We will therefore oppose it. We will explain our reasons in writing through a letter to his excellency the President before the next cabinet meeting” said Mr.Hasen Ali.

Asked whether endorsement from party members to change the mandate could be obtained if necessary, Mr. Hasen Ali replied in the negative.” We can change or obtain a fresh mandate only at another general convention. If we want it in a hurry we have to conduct a special convention. That cannot be done before next week” he said.

Speaking further Mr. Hasen Ali said that it was highly unlikely that the SLMC convention delegates would consent to the party supporting the proposed amendments.”Our members and supporters at grass root level are firmly opposed to devolution being diluted or provincial councils being circumscribed. Already many are telephoning me and other fellow MP’s and expressing satisfaction at our decision. After all we campaigned during the Eastern Provincial elections in September 2012 on a platform of strengthening devolution.We can’t go against that”he said.

When pointed out that the Muslim Congress councillors in the Eastern Province had supported the Divineguma bill which also impinged upon areas allocated to the Provincial councils , Mr.Hasen Ali said that was wrong and that disciplinary action proceedings were going on within the party over that issue.He declined to elaborate further on that aspect.

Speaking further on the subject of amending the Constitution Mr.Hasen Ali said that the party was not against Constitutional amendments in principle but was not in favour of arbitrary and ad hoc changes done in a haphazard mode without consultation among stakeholders.”You cannot make Constitutional changes in such a frivolous way” he said.

When asked whether the party was not troubled by possible consequences of such a decision, Mr.Hasen Ali said “there is already a lot of pressure but we will not change our stance as we are bound by the party mandate”.

When a question was posed as to whether the perceived defiance by the Muslim Congress could pave the way for attempts being made to break the SLMC and promote defections, Mr. Hasen Ali replied that he could not speculate on such moves being undertaken. “But one thing I can say is that none of our people will break away from the party at this time over this issue as public opinion among the Muslim people would condemn them permanently”.

When asked as to what other Muslim parties in the Govt such as the National Congress of Local Govt and Provincial Councils minister Mr ALM Athaulla or the All Ceylon Peoples Congress of Industries and Commerce minister Risad Badhiyutheen would do ,Mr.Hasen Ali said that he could not speak on behalf of other parties and could only reiterate that the Muslim Congress would stand firm.

When asked as to whether this move by the party could jeopardise the position of Muslim congress ministers Hakeem and Segu Dawood, the SLMC secretary general replied thus –“I don’t think it will come to that. The President is an experienced political leader. He knows that we and several others in the Govt are not happy about the proposed changes. I think he will appreciate our position and act accordingly”.

When pointed out that the Muslim Congress had made many compromises in the past in a bid to safeguard the party and that a compromise was possible in this matter too to protect the party , Mr.Hasen Ali responded emotionally –

“Yes. We have compromised in the past to preserve the party from fragmenting but we cannot go on changing our party principles simply because we want to prevent party splits.What is the use of a party structure if we are to betray all our policies and ideals? I have been associated with the late MHM Ashraff from the inception of the party.I am very sure that if he were alive today he would be taking the same steps like us in the present situation.Today there are lots of grievances among our people and party members due to anti-Muslim activity by extremist organizations. In such a situation our party that was founded to protect the Muslim community will remain firm”.

The SLMC Parliamentarians deciding not to support the proposed constitutional changes amounts to a political setback for the Rajapaksa regime. With several other MP’s including those of a left leaning tendency being opposed to the envisaged amendment the Government would find it difficult to garner the necessary two – thirds majority required for a Constitutional amendment.

The current crisis evolved when President Mahinda Rajapaksa in a sudden move initiated action to present an urgent bill in Parliament to amend the Constitution regarding the substance and unit of devolution without wide or deep consultation with all relevant stakeholders.

1)Remove the safeguards in Article 154(G)(3) of the constitution to permit the centre to pass legislation in relation to subjects in the Provincial Council List by a simple majority provided that a majority of PCs agree to the said legislation.

2) Repeal Article 154(A)(3) which allows Parliament to provide for two or three adjoining provinces to form one administrative unit.

The proposed amendment was criticised vehemently by proponents of devolution such as the Centre for Policy Alternatives (CPA) who argued that this move would “render the Thirteenth Amendment worthless as a mechanism to devolve legislative power, as the central government at any given time could take away any or all powers vested in the PCs by passing legislation with a simple majority”.

President Rajapaksa convened a meeting of all Political party leaders in the Government on Tueday June 4th 2013 where the issue of the 19th Constitutional amendment was discussed.

President Rajapaksa told the party leaders that the decision to present the 19th amendment in Parliament would be finalised and confirmed at the cabinet meeting on Thursday June 6th 2013.

Sri Lanka Muslim Congress leader Rauff Hakeem was not present at the Govt party leaders meeting as he was away in Jordan at that time in his official capacity as Justice minister.

However when Hakeem heard about the moves to introduce the 19th Constitutional Amendment the SLMC leader cancelled his proposed visit to Palestine from Jordan and returned hastily to Sri Lanka in order to participate in Thursday morning’s cabinet meeting.

Hakeem surprised President Rajapaksa and several of his cabinet colleagues by expressing his reservations on the proposed bill in a very open manner. With President Rajapaksa intervening directly at one point, the exchange of views took on the form of a verbal confrontation, but the Justice minister to his credit did not back down.

Hakeem took up the position that the proposed amendment sought to dilute and circumscribe the powers of devolution provided by the 13th Constitutional amendment and other related Constitutional provisions. The SLMC leader stated that this move had huge implications for his party the Muslim Congress, the Muslim people and the minority ethnicities in general.

The Justice minister pointed out that his party the Sri Lanka Muslim Congress had passed a resolution at the party convention against any further proposals aimed at diluting the powers of devolution provided to the Provincial councils at present.As such he was duty bound to consult his party and obtain their views before deciding on the matter,Hakeem explained.

President Rajapaksa being a seasoned politician gauged the prevalent mood of the cabinet regarding Hakeem’s stance.

President Rajapaksa announced abruptly that the final decision on the Constitutional amendment would be taken at the cabinet meeting next week. Winding up further discussion on the topic ,President Rajapaksa said that the one week gap would provide enough time for Rauff Hakeem and other ministers to study the proposal further and consul their respective parties.

The President’s media machine also spreading the news directly and indirectly that the decision on the amendment has been postponed in deference to a request by Rauff Hakeem for time.