Murdered then tossed into a mass grave: Sri Lanka unearths 150 decades-old skeletons and promises to uncover the truth 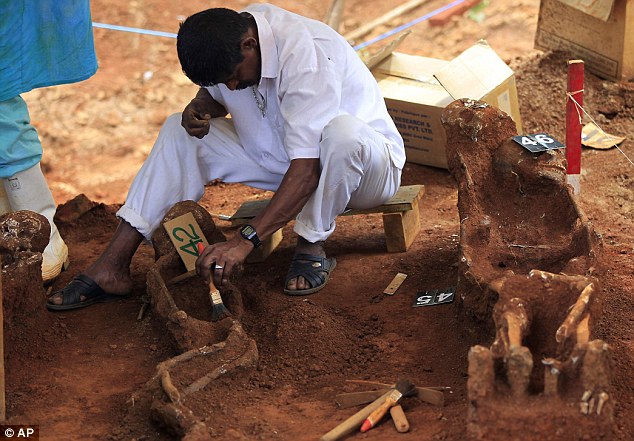 The Sri Lankan government has launched an investigation into a recently uncovered mass grave containing more than 150 skeletons.

President Mahinda Rajapaksa announced a presidential commission will be appointed to investigate the chilling find, likely to be the bodies of Marxist rebels killed decades ago, said Lakshman Hulugalle, head of the government’s Media Centre for National Security.
It was found late last year at a state-run hospital in the central region of the country.

Voice of the dead: A Sri Lankan worker unearths skeletons at a mass grave found in a hospital construction site. The president has announced an investigation into the site 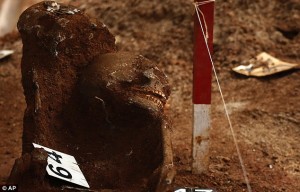 Macabre: There are 150 skulls in the grave, most likely of Marxist rebels

Mr Hulugalle told reporters the commission’s probe will be in addition to an ongoing police investigation, adding names of the members of the commission will be announced soon.
Workers found the remains while doing construction work in December at the hospital in Matale, about 65 miles northeast of the capital, Colombo. The 154 skeletons were found buried in neat rows, five or six stacked on top of one another.

Last month, a judge declared the mass grave a crime scene, and said the skulls and bones recovered date back 25 years, strengthening suspicions that they belonged to suspected Marxist rebels killed at the time. 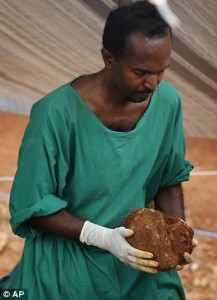 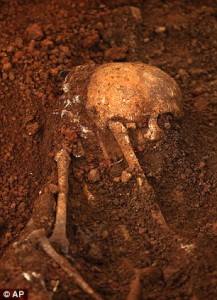 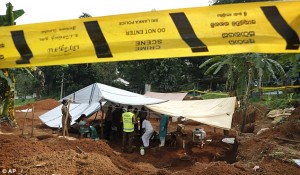 Unearthed: The mass grave was found in December by workers on a hospital construction site

Magistrate Chathurika de Silva told a court in Matale that tests carried out by archeological and judicial medical officials showed the remains dated to between 1987 and 1990.

During that period, thousands of men and women suspected of having ties to the rebels disappeared after being arrested by security forces.

When the bodies were found, there were initial claims that they belonged to those killed in an epidemic in the 1940s or in a mudslide. 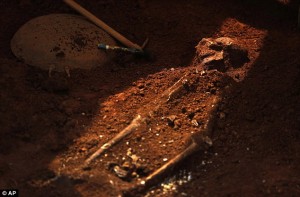 Light onto darkness: The presidential commission will run alongside the ongoing police investigation into the deaths 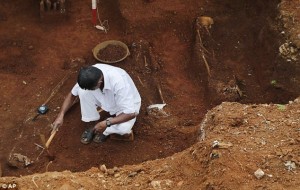 The Marxists were mostly rural Sinhalese, the country’s majority ethnic community. They complained of economic hardship

However, hospital authorities did not have any records of bodies buried on the premises.
A Marxist group, the People’s Liberation Front, which led two uprisings first in 1971 and again in 1987 to 1989 against the government, said the bodies may belong to its members killed by security forces and demanded that the government conduct a full investigation.

The Marxists were mostly rural Sinhalese, the country’s majority ethnic community. They complained of economic hardship and said that rural people were denied equal opportunities. 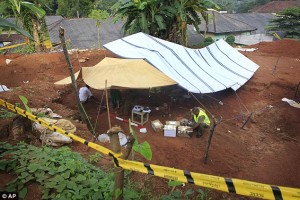