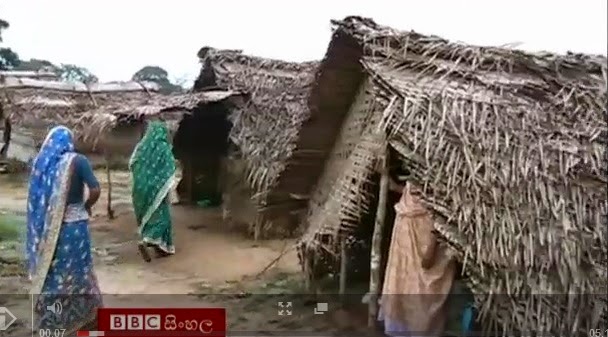 Wilpattu Park crisis: Borders identified, solution in sight?60 journalists, photographers shown ‘illegal’ settlements outside Willpattu Park
Zacki Jabbar reporting from Wilpattu National Park border
Amidst allegations levelled by the Bodu Bala Sena (BBS) and Industry and Commerce Minister Rishad Bathiudeen over illegal settlements within the Wilpattu National Park (WNP) 60 journalists including foreign correspondents on a fact finding mission on Tuesday were shown the ground situation by the authorities in the area .
The crux of the BBS complaint was that Rishad Bathiudeen had helped Northern Muslim residents of Mariakkar Marichikatti, Karadikuli and Palaikulli in the Musali Pradeshiya Sabha Division in Mannar driven out of their villages by the LTTE in 1990, return in 2010 and grab 22,000 hectares of land belonging to the WNP.
Bathuideen, who has vehemently denied the allegations, arranged and accompanied the journalists from Colombo to Musali Pradeshiya Sabha Division in Mannar.
Along the border of the WNP on the partly constructed Puttalam- Mannar road stretching over a distance of 36 km, there were no signs of any human settlements within the WNP. At the Mannar end of the WNP, it was quite evident that the 73 houses––small mud huts––were standing outside the WNP, on what the Wild Life Department (WLD) has at various times described as Sanctuary or Buffer Zone.
No sooner had the journalists got off the villagers surrounded them asking what right the authorities had to drive them out of their ancestral lands which they had been forced to leave in 1990.
With a file in hand and copies of 30 deeds and some documents which he termed as permits , Mohammed Thoweek (42) an office bearer of the Mannar District Rehabilitation Association said: “There are four villages in this the Musali Pradeshiya Sabha Division. They are the Marikkar Marichikatti, where you are standing on right now. On the other side of the road were the villages of Mulikulam (Tamil), Karadikuli and Palaikuli (both Muslim) which covered a total of 300 acres. This is where our fields and burial grounds were also located. It is now held by the Navy. When 450 of the 1200 families driven out by the LTTE in 1990 returned in 2010 after the war had ended, we found that only the land covering Marikkar Marichikatti remained unoccupied. So, we cleared the area spending nearly Rs. 300,000. Thereafter we also built a community Hall which was declared opened by the former Agrarian Services and Wildlife Minister S. M. Chandrasena. Now, the Wildlife Department at the instigation of the BBS is alleging that our humble abodes are illegal. What were the authorities doing while our families were living in this very place for centuries prior to 1990. As you can see this our village and we have come back to it. So, please don’t drive us out of here in the similar manner the LTTE did. Please, gives us all the assistance to get back on our feet after having wandered from camp to camp for nearly 14 years,” he appealed.
Asked if he was prepared to leave the area which the WLD says belonged to the WNP buffer zone, Thowfeek replied: ” Our families don’t want to go. Would you like to be evicted from your ancestral villages? Look, there is the Mosque which we built in 1970, which has since been damaged and partly overgrown with the shrub jungle. There were schools and a hospital also in this area.”
Minister Bathiudeen, addressing the media at the conclusion of the fact finding mission, just outside the Jasmine Housing City Project, which the BBS claims was also within the WNP, said that the plight of the Northern Muslims numbering over 100,000 driven out by the LTTE had to be looked at compassionately because it was a humanitarian problem encountered by people who, after all, were Sri Lankans.
Appealing to the BBS not to propagate lies and create tension and conflict, the Minister pointed out that if as the Wildlife Department says the residents of Marikkar Marchikatti were living within the WNP buffer zone and it was illegal––the matter is now before court––then they should be provided alternative land and financial assistance to construct in the least their humble abodes.
Muslims would never stand in the way of any measures implemented for the purposes of national security, he emphasized.
If these ‘forgotten people’ had joined the LTTE’s war against the Sri Lankan State they would never have been driven out of their villages and would not have had to suffer for nearly 24 years, Minister Bathiudeen noted. “Do not prolong their suffering and please resolve this issue now and prevent extremist elements from setting the country on fire,” he appealed presumably to the powers that be.