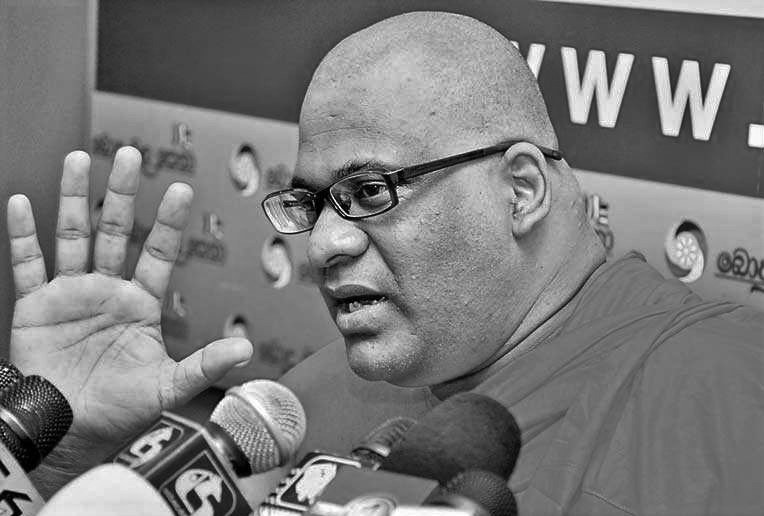 The 7 July ‘Rally of the Un-Enlightened’ (Colombo Telegraph, 4 July), that fizzled out without the expected turnout of 10,000 Buddhist monks, was the most emphatic demonstration yet by the majority Sinhala Buddhists that they would not allow hatred and bigotry to hijack the millennial legacy of peaceful coexistence of different religions and cultures in Sri Lanka.

The downsizing of that event brought a sigh of relief for hundreds of thousands of Muslims in and around Kandy, who feared for the worse, after enduring repeated violence in the hands of an inebriated mob, brainwashed by an Islamophobia manufactured by the organisers of this rally.

It is no exaggeration to say that since that horrible Easter carnage in April, the entire Muslim community has been unjustifiably asked to account for the lunacy of a few, a phenomenon not confined to Sri Lanka only.

However, the hidden agenda of the far-right and extremist groups like Bodu Bala Sena (BBS), Mahason Balakaya, Sinha Le and so on, in respect of the Muslim community needs be understood in light of what was announced in that rally by BBS Secretary Gnanasara.

From the beginning, and at least since the Aluthgama riots of 2015, BBS and its obstreperous secretary, were vociferous in demanding expulsion of all Muslims to Saudi Arabia or any other Arab country, by reinventing a 19th century argument advanced by Anagarika Dharmapala & Co. in a different context, that Muslims were “aliens” in Sri Lanka.

The fact that this community, like the Sinhalese and Tamils before, were also foreigners but arrived last and that they were indigenised over 1,000 years ago did not matter in BBS’ twisted history. Its ultimate goal is to make this island 100% Sinhala Buddhist.

It was this aspiration that was once again reinforced in Kandy, when Gnanasara announced that ‘”every home must have an owner and Sinhalese are the owners of Sri Lanka”. When saying that he quite naively expected the Tamils also to accept their status as tenants and live until they too would be ejected one day.

Perhaps, after realising the impossibility of wholesale expulsion of any community for that matter, especially in the current context of a globally-integrated nation state system, BBS now believes that a solution to the so-called ‘Muslim Problem’ should be found within the country.

There are three models in recent history which it could adopt, when given the power, to make its dream comes true. The most extreme of the three was Hitler’s “final solution” to the Jewish problem. His gas chambers and organised pogroms killed millions of Jews and provoked the infamous Holocaust. “Never again,” vowed those who escaped the Holocaust and never will the world tolerate such monstrosity to take place anywhere. Even though one thoughtless monk wished that Gotabaya Rajapaksa should play the role of a Hitler to clean the country out of its mess, it is doubtful whether that priest was thinking of a final solution to a Muslim problem.

The second model, although of equal horror but on a lesser scale, was that executed by the regime in Myanmar, which allowed the soldiers and a vengeful mob kill and rape thousands of Rohingya Muslims, burn their houses and crops, and forced hundreds of thousands cross over to Bangladesh. One of their monks, U Wirathu aka Win Khaing Oo, who the Economist described as the “Face of Terror”, and who blessed that cleansing in the name of Buddhism, also visited Sri Lanka and was accorded a red carpet welcome by the then President, Rajapaksa. If that horror were to be repeated in this country, there is no land border for Muslims to cross but only the Indian Ocean to drown. BBS and its partner groups like Mahason Balakaya and Sinha Le may welcome that. But they have to face the wrath of the majority Sinhala Buddhists of this country whose spirit of tolerance is unparalleled in the annals of Asian history.

The third model is the softest and is the one that lurks behind Gnanasara’s “moulding” of Muslim culture. This model is the one that is currently being experimented by the Chinese Government to produce a new generation of Uyghurs who would forget their ethnicity and religion, Islam, to become completely merged with the culture and values of mainstream Chinese. According to several but reliable accounts, Uyghurs are now locked up in a huge concentration camp and are undergoing an intensive cultural cleansing.

Of course, no Government in Sri Lanka would dare to adopt this experiment, and that is why Gnanasara wants a mandate from President Sirisena, who released this man from prison, to undertake this moulding. Are he and his fellow monks of the same ilk going to turn their temples into correction centres where the ulama could be forced to attend lessons and training? Or are they aspiring to invade mosques and madrasas to brainwash its attendants with their de-Islamisation program?

Gnanasara is trumpeting that he wants to eradicate Islamic fundamentalism in this country. He also confuses religious fundamentalism with Wahhabism and extremism.

One can understand this type of half-baked and nationally destructive ideas of BBS and other such elements in our society. But, what one cannot understand is the determined silence of a Presidency, Government and Parliamentary Opposition to counter this madness.

The Sinhala Buddhist majority has shown its utter disgust by not answering the BBS call to rally in Kandy. Where is the voice of sanity from national leaders? Either they do not want to give importance to the utterings of a few miscreants, which is understandable but not at the expense of the damage they are causing to the country’s economy and societal harmony, or they are hypocritically awaiting to reap electoral benefits from politicised Buddhism in the forthcoming elections.

That said, there is no question that the Muslim community and its religious and educational institutions need be reformed. That reformation has to be undertaken by Muslims themselves under an enlightened leadership that understands the current dilemma. No outsider has any mandate to dictate and force reforms upon a community.

The All Ceylon Jaiyyathul Ulama (ACJU) and Muslim politicians who are in bed with them have been too lackadaisical or obstinately obstructive in initiating and implementing reforms. Their joint stand against reforming the Muslim Marriage and Divorce Act, for example, illustrates best their obscurantism.

To start with, ACJU must include within its hierarchy qualified men and women from other fields. The religious class has arrogated for too long the name ulama exclusively to itself. That name, which is simply the plural of alim, meaning a learned person, applies even to secularly educated intellectuals. It is time such intellectuals from both genders are admitted into ACJU. Once ACJU itself is reformed, that body can become a progressive force to stimulate changes.

(The writer,Dr. Ameer Ali is attached to the School of Business and Governance, Murdoch University, Western Australia.)