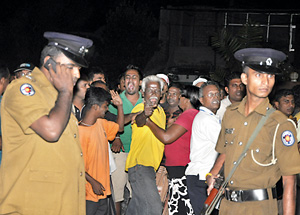 Gunmen who came on a motorcycle shot dead a Kelaniya Pradeshiya Sabha UPFA member just outside his house at Waragoda in Kelaniya last evening, heightening the tension in the area that has seen a hostile political battle between two ruling party factions.

The victim, Hasitha Madawala, was a close associate of PS Chairman Prassana Ranaweera and stood by him during the ongoing tussle between the PS Chief and Minister Mervyn Silva.Menaka Jayamaha, the victim’s neighbour, told the Sunday Times the killers who were wearing helmets shot Mr. Madawala at close range while he was standing outside his house.

“They fired five shots at the victim and then fired into the air before they sped away on their bike,” he said. “Mr. Madawala fell on the ground and was bleeding heavily. I shouted for help, but nobody came forward. It was only after a while that the neighbours took him to hospital.”

The victim died on admission to the National Hospital in Colombo.Inspector N. Wickremanayake, Officer in Charge of the Kelaniya police station said detectives were carrying out investigations, but no arrests had been made.Angry supporters of Mr. Madawala gathered at the scene of the shooting and demanded that the killers be brought to justice. Some blamed the police and rival politicians. PS Chairman Ranaweera was also at the scene.
In January last year, a gang surrounded Mr. Madawala’s residence, but he managed to escape.
ST