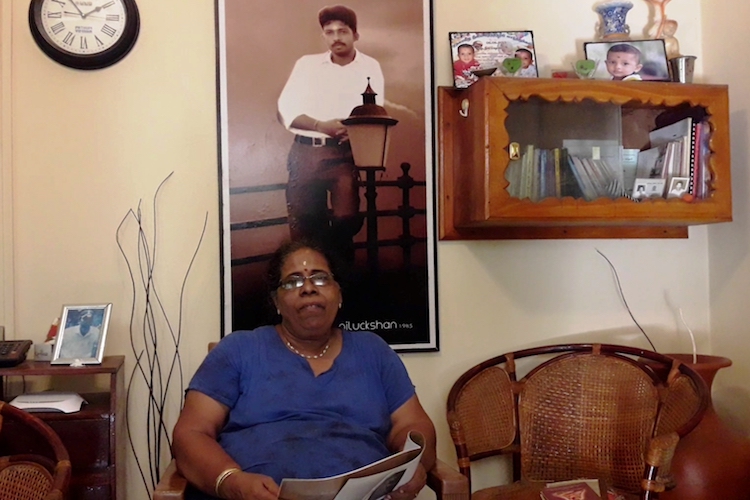 Image: Selvarani Sahadevan wants her son’s killers brought to justice but has received little encouragement in the 11 years since he died. (Photo by Niranjani Roland/ucanews.com).

Sahadevan Niluckshan was among many Tamil media workers who lost their lives during the island’s brutal civil war.

Selvarani Sahadevan is still seeking justice for her son nearly 11 years after he was shot dead by unidentified gunmen in Sri Lanka.

The retired principal of Jaffna Hindu Primary School made a formal complaint to the Sri Lanka Human Rights Commission in 2007 to bring the perpetrators to court but has still had no positive response.

Sahadevan Niluckshan, a 22-year-old media student at Jaffna University’s media research and training center, was murdered on Aug. 1, 2007, by gunmen on a motorcycle in front of his house in Kokuvil West in Jaffna. The city had a heavy military presence and a curfew because of the civil war (1983-2009) at that time.

His mother said Niluckshan had always opposed his family’s plan to leave Sri Lanka to escape the war, killings and abductions.

He started his journalism diploma in 2006 and was editor of Chaalaram, a magazine published by Jaffna’s Student Federation.

He attended an event to mark the anniversary of the death of journalist Tharaki Sivaram, who was abducted and killed by four unidentified gunmen in 2005.

“My son had leadership qualities to organize many events, which made others misunderstand,” said Sahadevan.

“Maybe the military thought that Sivaram’s death should not be commemorated. This event was also a reason that the military misunderstood my son as an LTTE [Liberation Tigers of Tamil Eelam] supporter, which led to this shooting.

“My son was innocent. His death certificate mentioned that death occurred from brain damage and shock due to the shots.

“The culprits who were behind this killing should be punished. Many Tamil journalists were killed but still there is no justice.” Sahadevan Niluckshan (right) was shot dead in 2007 by unidentified gunmen outside his home in Jaffna. (Photo by Niranjani Roland/ucanews.com)

“We both studied political science. We always argued for justice and we made students aware of racism and Tamil nationalism,” said Kanagaratanam.

“During that period, the media couldn’t write the truth. If anyone wrote the truth, he would be threatened or killed. I lost my friend.”

“Niluckshan was an upcoming young journalist. He had written several articles as an independent journalist,” said Palakidnar.

“The Tamil Media Alliance always pressurizes the government to investigate all these killings and disappearances. The government should allow the media and media personnel to carry out their duties in a free manner.”

Jaffna University awarded a gold medal in memory of Niluckshan to a media studies student for excellence in journalism.

Niluckshan was also honored as a journalist who lost his life in the line of duty by the Editors’ Guild of Sri Lanka in association with Sri Lanka’s Press Institute in 2008.