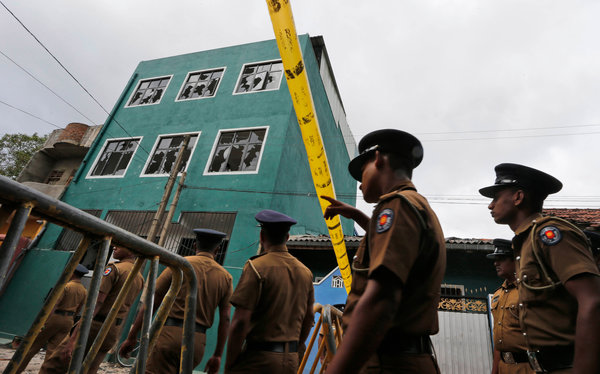 AGENCE FRANCE-PRESSE
COLOMBO, Sri Lanka — The Sri Lankan police imposed a curfew on a neighborhood in the capital on Sunday, a day after a Buddhist-led mob vandalized a mosque in an episode that has heightened religious tensions here and prompted a statement of concern by the United States.

The police announced that a 13-hour curfew would start at 6 p.m. in the residential and commercial areas of the Grandpass district in Colombo, the capital, which remained under tight security after at least four people were wounded in Saturday’s attack.
Witnesses reported scattered stone-throwing in the neighborhood on Sunday as the authorities deployed more police officers and paramilitary commandos.
The United States Embassy in Colombo expressed concern over the violence and urged the authorities to prosecute those responsible.
“This incident is particularly troubling in light of a number of recent attacks against the Muslim community in Sri Lanka,” the embassy said in a statement. “Targeting any place of worship should never be permitted, and we urge calm from all sides.”
About 70 percent of Sri Lanka’s 20 million residents follow Buddhism, while Muslims are the second-largest religious minority, at just under 10 percent. Hindus make up about 13 percent of the population.
Local Buddhists had objected to the mosque, a replacement for a nearby mosque that was marked for demolition as part of an urban development project.
The government held talks with Muslim leaders and clergy members on both sides on Sunday and announced what Technology Minister Champika Ranawaka described as a “just solution” acceptable to all sides.
“The settlement we reached today is for the mosque to move back to its original position,” Mr. Ranawaka told reporters. The government rescinded the demolition order, he said.
Muslim ministers in the governing coalition said a failure to take stern action against those responsible for similar attacks in the past had brought about a breakdown in law and order.

“The notion that there are elements in our society who can act with impunity should be totally eradicated from the public perception that has now taken root in our society,” the ministers said in a statement