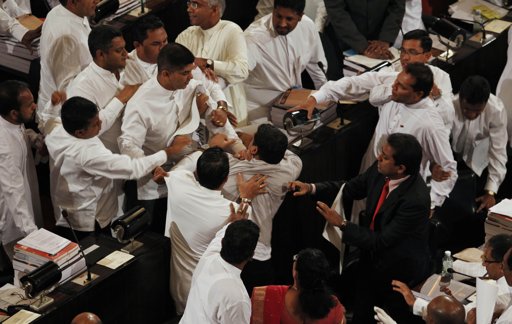 Image: Sri Lanka MPs like to fight among themselves as well.

The political class in Sri Lanka, as in many other countries in the world, is not beloved of those who voted them into office; and they are very well aware of that unpleasant fact. Given that knowledge, it is inconceivable that our Members of Parliament including Ministers, State Ministers and Deputy Ministers will vote themselves the massive 215% pay increase that is now being talked about. No wonder then that Speaker Karu Jayasuriya’s office is on record saying that there is yet no final decision on this matter. It was up for discussion at the last leaders of parties meeting and, unsurprisingly, nobody had objected. A deputy minister of the government, undoubtedly with a finger on the public pulse, declared on Friday that the president and prime minister will never allow it. But the Leader of the House, Mr. Lakshman Kiriella, said that nobody objected when this matter was raised at the party leaders’ meeting on July 17.

That nobody objected will not surprise anybody. The public has long been aware that there is unanimity among our lawmakers whenever matters concerning their wellbeing and welfare, including their pay cheques, are raised. The people may not be aware that over 12 years ago it was agreed – surely unanimously – that the emoluments of parliamentarians be linked to what the senior judiciary is paid. Under that arrangement, an MP’s pay was to be linked to that of a High Court judge, that of Deputy Ministers to the emoluments of an Appeal Court judge while the pay of Cabinet Ministers will be related to what Supreme Court judges earn. Salaries of the judiciary have been upwardly revised in January this year and it was only a matter of time before politicians looked for the implementation of the link formula. Timing is of the essence in these matters. The reality, given the economic circumstances of ordinary people burdened with an unbearable cost of living, can never be right. The realization of this fact would have no doubt led to a decision to seize the bull by the horns.

The people have not yet been enlightened on who brought up the pay hike proposal at the party leaders’ meeting although one of the participants, Mr. Sumanthiran of the TNA, was reported to have said there was no proposal as such. But he had pointed out that the salaries of lawmakers were linked to those of the judiciary and a revision must follow. The general perception in the country is that our MPs are a pampered lot. The media takes a sadistic delight in highlighting the various benefits they receive. These range from sumptuous subsidized meals at the parliament restaurant, allowances for attending sittings of the House and its various committees, qualification for a pension after a mere five years service, saleable – or should we say ‘floggable’? – duty free vehicle permits enabling profits running into millions and much more. A few months ago MPs were granted a monthly allowance of Rs. 100,000 to set up an office in their electorates. We don’t know what perks the members of the higher judiciary enjoy, but would wager our last rupee that they don’t match up to what parliamentarians get.

There was a time when duty free vehicles granted to MPs were technically unsalable for a period of years. But these vehicles were freely sold on the open market on what used to be called ‘open’ papers. Just before late President Ranasinghe Premadasa was slapped with an impeachment motion, there was a special police unit set up by him checking on the sale of duty free vehicles by parliamentarians. These vehicles were stopped on the roads and their papers checked. The bloodhounds even noted down details of hard to locate chassis and engine numbers. These measures naturally incensed particularly those MPs who had pocketed big bucks by selling their duty free vehicles and no doubt added more signatures to the impeachment motion. President Premadasa overcame the bid to topple him, but realized very clearly that it is dangerous to make enemies of MPs. Eventually he created a new class of monitoring MPs to feather the nests of backbenchers without ministerial and deputy ministerial perks.

Rightly or wrongly, the general perception of our lawmakers is that they are a greedy, grasping lot. Undoubtedly they cannot all be tarred with the same brush. Long ago in the middle sixties when Mr. Dudley Senanayake was prime minister, there was a proposal to give MPs duty free vehicles. It was opposed at the UNP parliamentary group by a backbencher from Bingiriya who did not own a car and attended parliament by commuting to Colombo by bus. Human nature being what it is, only very few MPs would say ‘No’ to something that benefits them. They are not special in that regard. What employee would say no to wage increase that is proffered? Maybe certain adjustments like granting the hike by way of an allowance that would not impact on pensions will be made. But expect no howls of protest from the Hon. Members. Nobody will go to Lipton’s Circus on that score.