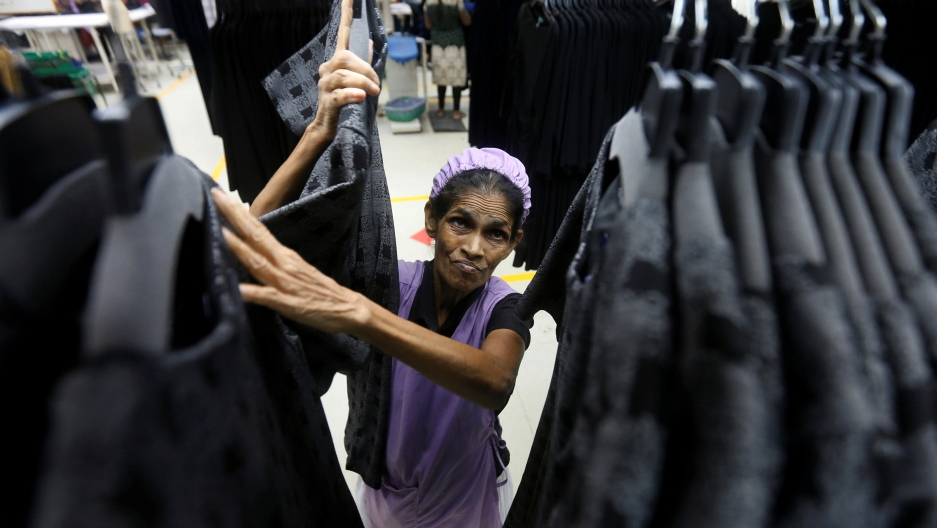 The Modern Slavery Act was seen as a big achievement for combating the issue of forced labor. But since it was passed by the UK government in 2015, many have pointed out its shortcomings. In particular, how the legislation helps cover up serious forced labor issues, all the while making citizens who are concerned about the problem feel better.

These local managers feel tremendous pressure to monitor their workforce, even beyond the shop floor, for fear of losing their contracts. And this leads to an excessive amount of surveillance, with devastating consequences for factory workers, most of whom are female.

The Modern Slavery Act was passed after years of pressure from anti-trafficking organizations, which promoted global laws that hold all commercial actors jointly accountable for forced labor. Article 54 of the act requires UK companies to prepare slavery and human trafficking statements that account for their supply chains. Besides protecting vulnerable workers, these statements are also geared toward enhancing their reputations and improving investor confidence.

But by recommending universal policies, the Modern Slavery Act fails to take into account how local suppliers around the world respond to it, even though the law effectively transfers to them the responsibility to keep the workforce free from modern slavery. It has led to a climate of suspicion and fear that exacerbates the already difficult lives of their workforce.

I spent two summers speaking about the Modern Slavery Act to female factory workers in Sri Lanka’s free-trade zones, which are industrial areas with a number of garment factories that supply many foreign companies. I found there is intense pressure on local managers to clean up their assembly lines in such a way that the western companies which hire them could not be accused of modern slavery. The pressure to appear “clean” results in an unhealthy working environment.

It also limits women’s freedom in a number of ways. For instance, a number of women I spoke to engaged in part-time sex work to make extra money outside of their factory jobs. This work was of their own choosing — and very different from the sexual trafficking or exploitation that the Modern Slavery Act is also designed to stop. But local managers feared it would be seen by Western auditors as exploitation and threaten their contracts. As one factory manager told me: “If we do not fire part-time sex workers, our factories can get blacklisted and our orders will be canceled.”

Some international companies also have whistleblower policies which put the onus on workers to report any concerns they have about colleagues being exploited. It’s meant to be for their protection, but increases the environment of suspicion and surveillance in factories.

While there is nothing in the Modern Slavery Act that says workers must behave a certain way outside the factory premises, managers are consumed with anxiety over being accused of aiding and abetting sexual slavery.

Many factory workers told me how factory compliance officers asked them to stop doing any part-time work, including sex work, as soon as possible. They were also told to report on colleagues.

One worker speculated that the sudden firing of a colleague had something to do with the new policies that came into place after the Modern Slavery Act. While nobody had actually accused her of sex work, there were rumors that she engaged in casual sex with various boyfriends. Considering the cultural context of Sri Lanka, where this behavior is heavily frowned upon and even equated with prostitution at times, it can be seen as the misapplication of the Modern Slavery Act at the local level, resulting in an even more stressful work culture.

It’s not the first instance where international attempts to stop human trafficking has complicated things for the local workforce. In Congo, the efforts to halt child labor associated with cobalt mining led to thousands of legitimate adult jobs being lost and much socioeconomic upheaval due to blanket policies being put in place, which pay little attention to local issues at play.

The workers I spoke to who engage in part-time sex work told me that they do so because their factory pay is not enough. Many women are hoping to earn enough to buy a small plot of land to achieve financial independence.

So a better remedy to stop women from sex work might be to pay them a meaningful living wage. Instead, the Modern Slavery Act’s emphasis on clean supply chains is making women’s livelihoods more precarious. Perhaps if the act emphasized better pay for workers in global supply chains the outcome might be different. But the bottom line is, it must encourage better engagement with the local workforce.

The act was imposed in Sri Lanka without consulting global factory workers and now threatens a space that previously allowed women a path to economic empowerment. The conflation of sex trafficking with sex work assumes the majority of women in developing countries are victims that lack their own agency. But, for many of the women I spoke to, sex work was their own choice.

More disturbingly, intentionally or not, Article 54 makes global factory managers responsible for the leisure activities of their workers and, by extension, their moral conduct. Rather than requiring UK companies to ensure a living wage and help the education and economic empowerment of their supply chain workforce, the Modern Slavery Act punishes them.

Sandya Hewamanne is a senior lecturer in sociology at the University of Essex.

This article is republished from The Conversation under a Creative Commons license. Read theoriginal article.