By D.B.S.Jeyaraj
In a peculiarly aggressive display of “Saffron Terrorism” a mob led by a Buddhist Priest has deployed force and taken away a statue of the Elephant faced deity known as Pillaiyar in Tamil and Gana Deiyo in Sinhala from a Hindu temple in Panamai on the Eastern coastal district of Amparai.In a flagrant violation of law and order and the freedom of worship, an ancient statue of God Pillaiyar also known as Vinayagar and Ganesh was seized by a mob and taken away from the Sithi Vinayagar Hindu temple in Panamai /Panama in broad daylight on Monday August 6th.

The “captured” Pillaiyar statue has been taken to the Buddhist Vihare in Panamai by the mob comprising thugs, homeguards and members of the armed forces in civil attire. The entire operation was masterminded and commanded by a Buddhist Priest.
The Pillaiyar statue is now being kept in the premises of the Panama Buddhist Vihare
At a time when Muslim Congress leader and Justice minister Rauf Hakeem has publicly requested President Rajapaksa to eradicate “saffron Terrorism” in the same way he eradicated “tiger terrorism” the conduct of the Panamai Buddhist priest suggests that Saffron Terrorism continues to manifest itself in different forms in the country.
While Saffron Terrorism is aimed at demolishing places of worship venerated by adherents of the Islamic, Christian and Hindu faiths in several places or advocates curbs on the practices of minority community religions , the incident at Panamai is of a different nature it appears.
In this instance the venerated statue of Pillaiyar has been appropriated through force and taken to a Buddhist vihare for specific reasons that are yet unclear.
According to residents of Panamai the Pillaiyar temple here has been in existence for many centuries. The Pillaiyar statue too is of rare vintage and has been worshipped devoutly by Hindus and Buddhists for many, many years.
Recently the temple itself was renovated and a Kumbhabishekham ceremony held. A new Pillaiyar statue was installed in the sanctum sanctorum of the temple.
The old statue regarded as having special powers was placed at the frontal premises of the temple.
Devotees however continued to worship both statues and usually dashed coconuts to the older statue. Most Buddhists too worshipped at the Hindu temple and made vows to the ancient Pillaiyar statue.
Pillaiyar is usually revered as the remover of obstacles and the God who blesses beginnings. Regarded as the eldest son of Lord Shiva and Parvathy, Pillaiyar is a patron of the arts and also the deity of Intellect and wisdom. Pillaiyar is worshipped devoutly at times of trouble, before commencing long journeys and at beginnings of rituals,events and ceremonies.
The Panamai Pillaiyar was therefore widely worshipped by both Hindus and Buddhists. The ancient statue was worshipped more by Sinhalese after it was brought outside.
Panamai in the Pottuvil Electoral division of the Eastern Province district of Amparai has a mixed population of Tamils, Sinhalese and Veddahs. The Sinhalese in Panamai are descendants of People from the Uva province who relocated to the East coast after the British ruthlessly suppressed the Uva-Wellassa rebellion. 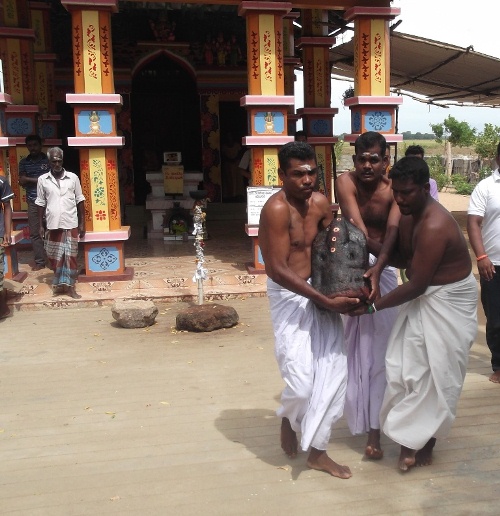 The primary caste groups in Panamai are the Vellalas and Goigamas and those of the Dhobi caste. These castes are dominant among both Sinhala and Tamils. Historically there has been lots of inter-mingling among the Sinhalese and Tamils who have inter-married into each others families. Both ethnic groups are fluent in the Sinhala and Tamil languages.
The Buddhists have been worshipping for long at the Hindu temple as a Buddhist vihare was constructed here only in the early fifties of the previous century.
This happy state of ethnic amity and coexistence has been under strain during the years of the war between the Armed Forces and the Liberation Tigers of Tamil Eelam (LTTE). After the war ended a “political Buddhism” ideology has permeated the consciousness of many Sinhala youths enlisted as Home guards. Military personnel stationed in the area also contribute to this situation.
Despite this the older generations of both communities continue to maintain cordial relations to a great extent.Buddhists continued to worship the Pillaiyar statue at the Hindu temple
Against this backdrop the local Buddhist priest had started demanding that the old statue be handed over to him.Since he could not provide a satisfactory reason for such a request the Trustees of the Hindu temple refused to oblige
This infuriated the Buddhist priest who had on more than one occasion threatened the temple authorities and had even brought groups of thugs to intimidate them. There had also been two attempts by “unknown”persons to clandestinely steal the statue during nightfall.
This had necessitated a batch of volunteers sleeping at night in the temple vicinity to safeguard the statue.
The Hindus of Panamai had also complained to the Police and Army in the area about the matter and requested the authorities to take appropriate action. Nothing however was done but the Buddhist priest was further incensed by this.
The Panamai residents also appealed to Tamil National Alliance (TNA) MP for Batticaloa district, Seenithamby Yogeswaran who telephoned Police and Army officials. Again no action was taken.
Matters came to a head on Monday August 6th when a mob led by the Buddhist priest invaded the Hindu temple premises during day time and attempted to take the statue away. When the Poosari priests and devotees resisted they were roughly manhandled and assaulted. 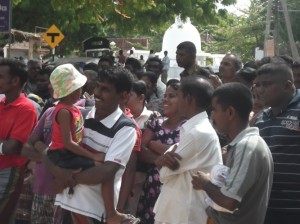 The large mob comprising known thugs, homeguards and security personnel in civils outnumbered those who were trying to protect the statue.Also because of the involvement of the security factor the people were helpless.
The mob took away the statue to the Buddhist vihare premises.
The Hindu devotees have lodged complaints to the Police and Army.They also informed TNA Parliamentarian Yogeswaran who has sought an appointment with Prime Minister DM Jayaratne to complain about the incident and request urgent remedial action.
It is unclear as to why exactly the statue was taken away.One reason adduced is that the Priest intends installing the statue permanently within the Buddhist vihare premises and thereby wean away Buddhists from worshipping at the Hindu temple.
Another suspicion is that given the popularity of the Pillaiyar the ulterior aim is to “disappear” the statue so that the mystique attached to it would diminish.
The third theory is that the statue is to be sold as a valuable idol to antique collectors.
Whatever the motive the crude action of the Buddhist priest has caused much grief and sadness to the 250 plus Hindu families of Panamai.
This act of blatant “saffron terrorism” is indeed unique as it is perhaps the only instance where adherents of one religion invade the place of worship of another religion and seize the deity and bring it back to their place of worship.
But then the process of appropriating another religious place of worship has also prevailed in Sri Lanka for long. The best (or worst) illustration of this process can be seen at Kataragama which used to be known as Kathirkaamam.
DBS Jeyaraj can be reached at [email protected]