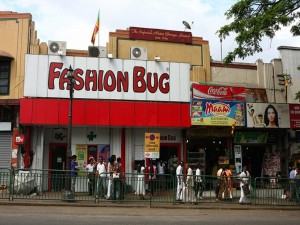 “Fashion Bug” has a showroom and warehouse complex situated near the Pepiliyana junction (intersection) in the Boralesgamuwa area.Its administrative head office is also within the complex. Pepiliyana is about 9 km away from Colombo city.

Initially a group of around 25-30 persons including 8-10 Buddhist Monks had gone to a Buddhist Vihara in the vicinity and commenced a meeting at dusk.It is alleged that this group came to Pepiliyana from Nedimala,Dehiwela.

It was stated at the meeting that a 15 year old Sinhala Buddhist girl employed at “Fashion Bug”had been raped within the premises by a Muslim working in the same establishment.

While the meeting was in progress the bell at the temple had been rung incessantly. When people in the predominantly Buddhist neighbourhood flocked to the Vihara after hearing the bell pealing they got to know of the meeting and attended it.The crowd increased rapidly.

Buddhist priests and civilian speakers addressing the meeting harped on the alleged rape incident and stated that the honour and chastity of innocent young Sinhala Buddhist girls was at stake. “Fashion Bug”was accused of exploiting the Sinhala girls employed in the establishment.The gathering was informed that a campaign was necessary to save and protect the Sinhala Buddhists from Muslim exploiters at “Fashion Bug”.They were exhorted to join the “satana”(struggle) to “Rata,Jathiya,Aagama bera ganna”(save the country,race and religion).

Provoked by this inflammatory oratory a mob of around 300 exited the Vihara precincts at about 8 pm and converged near the “Fashion Bug” showroom and warehouse complex at Pepiliyana. The lead roles were played by the original group of “agent provocateurs”.Some Buddhist monks were at the forefront of the frenzied mob.A few were seen throwing stones.

The mob had then started attacking the “Fashion Bug” building with stones shouting anti – Muslim slogans.As the attack was in progress more and more people joined the swelling mob.

In addition to the mob engaged directly in the attack, hundreds of “spectators” also gathered hooting and jeering.Some cheered the mob shouting “Jayawewa”(Victory)in an eerie scenario reminiscent of the July 1983 anti-Tamil pogrom.

Many collected sacks of stones and brought them to the scene of the attack to be thrown.

Apart from throwing stones the mob also used iron rods and wooden poles to attack the building.The glass showrooms were smashed. Parked vehicles of “Fashion Bug”were also damaged.Some of the furniture was destroyed.Cloth Merchandise was burnt.

Employees who were working there were threatened and chased away. The Sinhalese employees were told that they should be ashamed to work in a Muslim establishment. A few who talked back were manhandled and assaulted. Women employees were abused in raw filth.

Several employees of “Fashion Bug”sustained injuries in the fracas.One manager is warded at Kalubowila hospital with head injuries.

A Sinhala resident living close to the building was also attacked despite his shouting out “I am Sinhala,I am Sinhala”.

When the media heard of the attack and rushed to the spot they were obstructed by the hooligans who did not want them to video or photograph the attack.

Some tried to grab the cameras from the media personnel and tried to manhandle them. When the media persons broke free after a struggle and went forward they were subjected to a barrage of stones by the mob.

At least seven members of the fourth estate were injured in the ensuing struggle and in the stone throwing. “Hiru TV”s Isuru Udayanga had three stitches to his head.

Although the Police arrived on the scene they did not display any “keenness” to conrol the mob or prevent the attack. Instead the Khaki-clad Guardians of Law and Order were more interested in maintaining “law and order”among the spectators witnessing the blatant break-down of law and order.

Meanwhile Muslim Politicians in the Govt were alerted who in turn got in touch with President Mahinda Rajapaksa and his Brother Defence secretary Gotabhaya Rajapaksa and appealed to them to take prompt action.The Inspector General of Police was also contacted.

Thereafter orders were issued and Police personnel attached to the Special Task Force(STF) as well as military personnel were deployed in Pepiliyana.

The STF and Army then exerted pressure on the mob leading to its gradual dispersal. The spectators too were chased away.

The situation was “brought under control” by 10.30 pm.

Defence sector officials went to the “Fashion Bug”premises,inspected the damage and assured the management that their security would be guaranteed. Extra security measures have also been set in place.

Defence and Urban Development secretary Gotabhaya Rajapaksa was also expected to visit the “Fashion Bug” establishment and inspect the scene of attack but the anticipated visit did not materialise on Thursday night.

Some Muslim websites have said that Gotabhaya Rajapaksa visited the Buddhist Vihara from where the mob came and spent a few hours there instead of going to the place that was attacked. These reports however are unconfirmed as yet.

The Police have now begun routine inquiries into the incident. A few are being questioned but as is usual in recent anti-Muslim incidents no constructive action or serious arrests are expected.

It is well recorded that the “Ethno religious fascist”organization known as the Bodhu Bala Sena(BBS) meaning “Buddhist Power Force” has been spreading racial venom and hatred at the Muslim owned “Fashion Bug”establishment in recent times.

Even last Sunday (Mar 24th) the General Secretary of the BBS Ven.Galaboda Atthe Gnanasara Thera told a meeting in Panadura that Sinhala Buddhists should boycott Muslim owned businesses like “Fashion Bug” and “No Limit”when purchasing new clothes for the forthcoming traditional April new year.The BBS had wanted people to purchase from shops owned by non –Muslims.

Last week a series of SMS messages were sent out by the BBS to media persons seeking their support in the campaign against Muslim owned busineses. The media was asked to give ample publicity to the BBS appeal asking people to patronise only non –Muslim hops during the April new year season.

The BBS has also been appealing to Sinhala employees particularly women to refrain from working at Muslim owned Business establishments.

Informed sources close to “Fashion Bug”management denied that such an incident had ever occurred there. It was pointed out that there was no employee below the age of 18 working at Fashion Bug”.

It is however learnt that a “rape incident” had indeed occurred at Pepiliyana some weeks ago where a Sinhala girl was allegedly raped by a Muslim man who was arrested and placed in custody pending investigations.

Neither the victim nor the perpetrator of the alleged rape had any connecton or link to “Fashion Bug”.It appears that a deliberate attempt has been made to implicate “Fashion Bug”with that incident and incite the mob attack.

The corporate directors of “Fashion Bug” were questioned by the Police at the CID directorate on Friday March 29th morning about the incident and statements were recorded. It appears that the Fashion Bug management would not be issuing any media statement about the incident.

The rapidly developing “Fashion Bug” establishment is entirely Muslim owned with four partners. The first clothing store was begun in 1994 in Bandarawela with 15 employees. Today it has 18 retail stores in different parts of the country with over 1200 employees more than half of whom are Sinhalese.

The latest store was opened in Matara on March 18th with minister Lakshman Yapa Abeywardena and Former Cricket capt Sanath Jayasuriya MP participating in the event.

“Fashion Bug”has also involved itself with several community development projects including one at the Kalubowila Hospital.

The “Fashion Bug”mission statement says it wants to “Provide society with superior products and services with affordable price by developing own brands, cater to changing lifestyles of the people which improve the quality of life and satisfy customer needs, and to provide employees with meaningful work and advancement opportunities”.

The “Fashion Bug” website says |that their vision is to be “the most preferred Clothing chain in Sri Lanka”.

If the Bodhu Bala Sena is allowed by the Raapaksa regime to continue with its racist hate campaign against Muslim establishments like “Fashion Bug” that visionary dream is likely to turn into a horrible nightmare soon.

DBS Jeyaraj can be reached on [email protected]
DBS