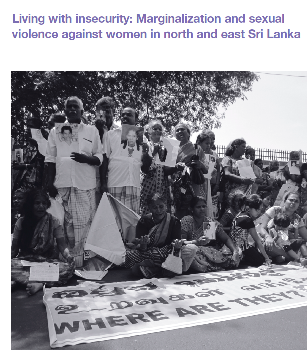 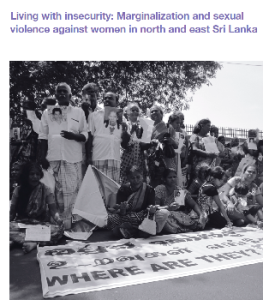 Four  years since the end of the armed conﬂict,  the situation of minority women in the north  and east of Sri Lanka has changed dramatically – and for many it is getting worse. In the latter stages of the conﬂict and its aftermath, military forces were responsible for a variety of human rights abuses against the civilian population, including  extrajudicial killings,  disappearance, rape, sexual harassment and other violations. In the current climate of impunity,  sustained by insecurity and the lack of military accountability, these abuses continue.

Thousands have lost their husbands and other family members during the armed conﬂict. Others, such as those whose husbands and relatives surrendered to the army after the government’s announcement of an amnesty for former Liberation Tigers of Tamil Eelam (LTTE) personnel, still do not know their whereabouts and face an ongoing struggle for truth, justice and accountability. For many women, this has brought new responsibilities: 40,000  households  in the north  and east are now female headed.

Yet Sri Lanka’s social and political environment remains heavily patriarchal, exposing women to multiple levels of discrimination. Many now have added responsibilities as primary  earners for their families: they face limited livelihood  opportunities  in the post-armed conﬂict  context, and are typically  excluded from oﬃcial development programmes. Furthermore, against a backdrop of competing  claims and mass resettlement, they are especially vulnerable to land grabs and other rights violations.

The militarization of the north and east from 2009 has contributed to continued insecurity for minority women. Many, especially widows and the wives of disappeared or ‘surrenderees’, are vulnerable to sexual harassment, exploitation  or assault by army personnel or other militias. The military  presence in the area, together with the increasing chauvinism of Sri Lanka’s political and religious hierarchy, has also reduced their cultural and religious freedoms – including their right to mourn their dead.

Resettlement in the north  and east, not only by those displaced during the armed conﬂict but also through government-sponsored relocation of Sinhalese workers and households, has raised tensions between communities in the current divisive environment. This is the result not only of disputes over land and resources but also diﬀering social and cultural norms. The increasing prevalence of sexual exploitation and relationships, coerced or otherwise, has put women on the frontline  of these conﬂicts.

So far the government’s response to these ongoing rights violations  has been inadequate. In fact, state and military  policies are actively contributing to insecurity and the marginalization of women in the north  and east. By contrast, women activists continue to advocate, often at great personal risk, for truth, justice and accountability for themselves and other survivors of the armed conﬂict. However, until a clear framework of protection is created for minority women and other marginalized groups, including  physical security, freedom of expression and land rights, the possibility  of lasting peace and reconciliation in the north  and east remains elusive.

The report, Living with insecurity: Marginalization and sexual violence against women in north and east Sri Lanka, will be available to download on MRG’s website
Minority Rights Group International is the leading international human rights organization working to secure the rights of ethnic, religious and linguistic minorities and indigenous peoples. We work with more than 150 partners in over 50 countries.
Share
Facebook
Twitter
WhatsApp
Pinterest
Email