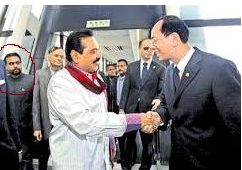 A coalition party of the Sri Lankan government, National Freedom Front (NFF), led by Minister Wimal Weerawansa announced that a petition would be signed demanding not to hold the Provincial Council election in the Northern Province with the powers vested in the administration constitutionally.
NFF demands to amend the Constitution to take back the land and police powers from Provincial Councils to the central government.
NFF politburo member Piyasiri Wijenayake revealed this yesterday (30) at a media briefing held in the party headquarters at Battaramulla, stating that the petition would be taken to the main towns in a vehicle to collect the signatures from June 3 to 12.
After receiving the blessings of the Chairman of Patriotic Bhikkhu Association, Ven. Bengamuwe Nalaka Thero, the vehicle carrying the petition will commence its journey at 9.30 am on June 3rd near Sri Pagnananda Budhist Center at Pattiya Junction, Kelaniya.
The leader of NFF and Minister of Construction, Engineering Services, Housing and Common Amenities, Mr. Wimal Weerawansa along with several other leaders of the party will also join the event.
The petition after collecting signatures for 10 days will be submitted to the Secretary to the President.
DM
Share
Facebook
Twitter
WhatsApp
Pinterest
Email