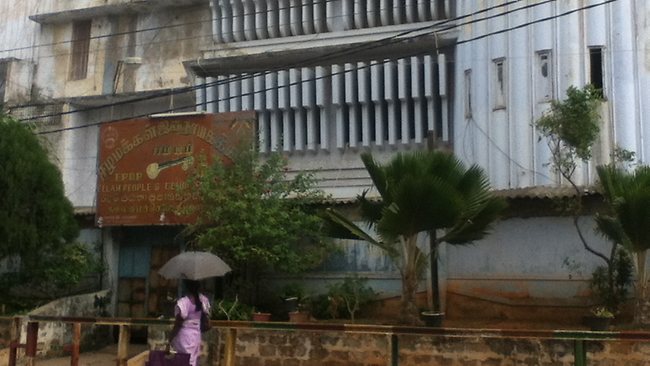 IN its 1970s heyday – before war and poverty made movie theatres a luxury northern Sri Lankans could ill afford – the Sridhar Cinema was Jaffna’s “A Number One” film house.

The smart new cinema, with its dress circle and regular Bollywood offerings, was hugely popular in the northern capital, as was its young owner Ratnasabapathy Mahendraraviraj, who built the theatre on family land just 1.5km from the heart of Jaffna town.
But the decline and current predicament of the once-grand Sridhar Cinema – and its now Australian-resident owner – reflects a wider problem plaguing many displaced Tamils as they return to their war-ravaged homes.

For 16 years the cinema has been occupied by one of the region’s most feared politicians, pro-government Tamil paramilitary chief and Eelam People’s Democratic Party founder Douglas Devananda.
For several years before that it was held by the rebel Liberation Tamil Tigers of Eelam.

Neither of them ever paid rent to Mr Mahendraraviraj, a 66-year-old Melbourne man now battling to regain control of his family’s last remaining asset.

Thousands of northern Sri Lankans, displaced by the 26-year civil conflict that ended in 2009 with the crushing of the Tamil Tigers, have struggled to regain land and property in the absence of legal documents destroyed in the war.

What makes Mr Mahendraraviraj’s problem special is his tenant is a powerful minister in a government, which insists it is committed to rebuilding the war-ravaged north and encouraging the return of expatriate entrepreneurs and land holders.

Mr Devananda is in fact the Minister for Traditional Industries and Small Enterprise Development, although he is wanted in India on charges of kidnapping and murder.

So fearful is the Jaffna politician’s reputation, Mr Mahendraraviraj says he has been unable to convince a single lawyer to represent his case.

“I asked a lot of friends to find me a lawyer but no one wants to go against him. They’re a bit afraid of him,” he told The Australian.
“They said it would be very difficult to get him out and the case would go on for years.”
Mr Mahendraraviraj left Jaffna in 1975 to study in London, contracting out the management of his 900-seat cinema for five years. Twice he returned – briefly in 1979 and again in 1982 – only to find his country on the brink of civil war.

With the eventual outbreak of open conflict in 1983, the Sridhar was forced to close.

The British passport holder, who emigrated with his family to Australia in 2005, has dreamed for years of rebuilding his cinema and reviving a family business that began in 1946 when his father opened Jaffna’s first movie house, named Mahendra Talkies after his eldest son.

But he fears his tenant has other plans.

Mr Devananda told The Australian he was committed to fostering the redevelopment of Jaffna and would vacate the Sridhar by the end of the year – but only once he had established the bona fides of his landlord’s claim and found alternative offices.

He also claims to have paid rent to an alleged joint venture partner in the business, though Mr Mahendraraviraj insists there is no such person.

“I am in charge of development in Jaffna. I am for development,” Mr Devananda said.

“(Mahendraraviraj) talked to me recently and I said ‘end of this year I will you give that complex’ but so far the ownership is not confirmed.

“If the proper ownership is established then it’s no problem to hand over the business. At the end of this year I will hand the building over.”

But Mr Mahendraraviraj says everyone in Jaffna – including his unwelcome tenant – knows he is the Sridhar’s owner, and that Mr Devananda contacted him in 1996 when he first occupied the cinema.

Mr Mahendraraviraj says since then he has made hundreds of calls to Mr Devananda and written countless letters, all to no avail.

He has returned numerous times to Sri Lanka but is too nervous to go to Jaffna until the stand-off is resolved.

“I have written to everybody but nothing’s happened. Where is the legal justice in this?

“There are a lot of people with the same problem but I can’t do so much because my life will be in danger.

“I don’t know what’s going to happen. (Mr Devananda) said he will leave by the end of this year but he said the same thing last year and the year before that
TA