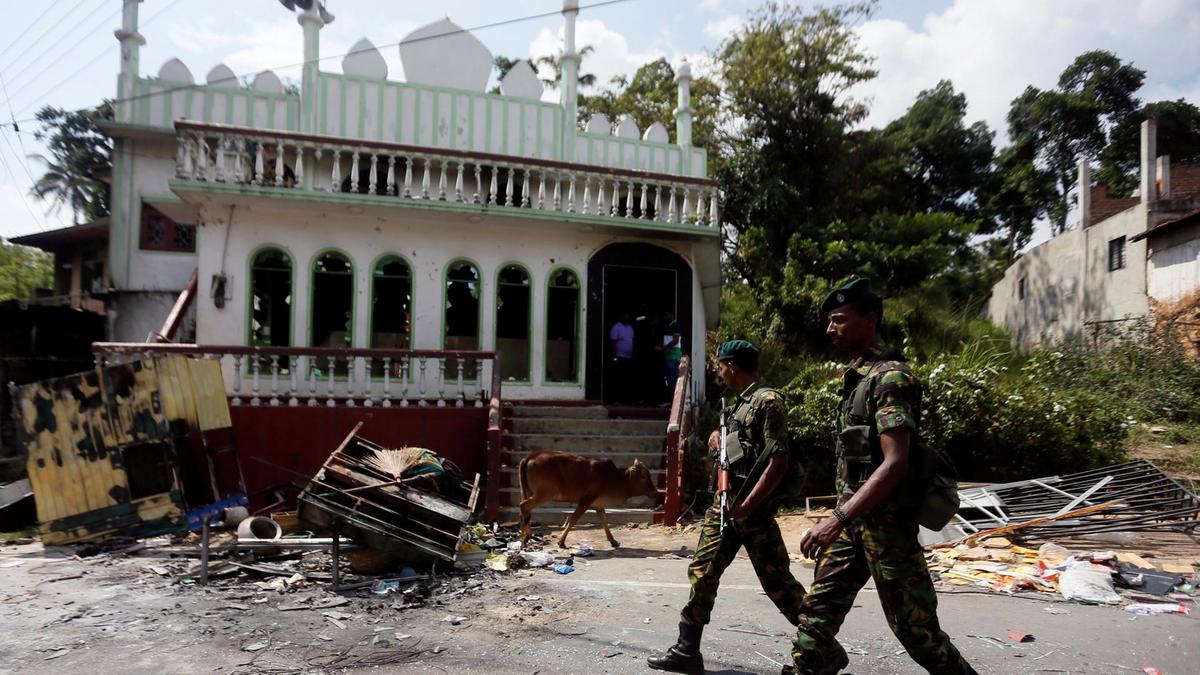 Image courtesy of The National: During the anti-Muslim violence in places like Kurunegala, Hettipola and Minuwangoda where 29 mosques were damaged.

(Asiantribue.com) Sri Lankan business chambers have failed to stand with Muslim owned SMEs at a darkest hour. “It was very sad for me to see the silence of Chamber of Commerce as the backlash on Muslim owned businesses raged” said the Minister of Industry, Commerce, Resettlement of Protracted Displaced Persons, Cooperative Development, Skills Development & Vocational Training Rishad Bathiudeen on 30 July at his Ministry office in Colombo 3.

Making his first official address after re-assuming duties in the same portfolio on 30 July he added: “As various communal elements openly encouraged local consumers to not to buy anything from Muslim owned businesses in the aftermath of Easter Sunday attacks, the Chamber of Commerce kept totally mum.

Minister Bathiudeen, and added: “You all know there were violence in places like Kurunegala, Hettipola and Minuwangoda where 29 mosques were damaged and so many Muslim owned businesses were destroyed leaving those families depending on the businesses also destitute.”

On May 14, communal violence spread in the North-Western Province damaging mostly Muslim owned businesses and SMEs. 196 such businesses were damaged by violence in Kurunegala and Gampaha Districts, according to the UK based Muslim Aid. The highest number of damaged businesses were in Wariyapola at 80, in the Kurunegala District. In his address to the nation on 13 May after the violence, Prime Minister Ranil Wickremesinghe said: “A countrywide curfew was declared to prevent unidentified groups orchestrating communal violence. At several places in the North-Western Province these groups created trouble, damaged property. Police and security forces have contained the situation, but these (unidentified) groups are still trying to create trouble. The unrest would hinder investigations into the April 21 attacks.”

Minister Bathiudeen also added: “Muslim countries stood with Sri Lanka when the human rights investigations were pursued by Geneva. At that time former President Mahinda Rajapaksa sent me and some other Muslim Ministers to visit Muslim countries to canvass their support to Sri Lanka, and we got their assistance-along with various types of reliefs from them as well. At the end of the war, Sri Lanka could not afford to buy crude oil since we were short of cash and after Muslim Parliamentarians’ request, Iran stepped in to give Sri Lanka crude oil for six months on credit, to the value of $250 Mn.”

Minister Bathiudeen first took over his portfolio in 2011 and has become the only Lankan Parliamentarian & Cabinet Minister to hold this portfolio four times in a row until he stepped down in June 2019 with other Muslim Ministers, and with his re-appointed on 29 July, he re-gains this portfolio for the fifth time in a row. His Ministry plays a key role in the country’s trade and small business development and SMEs, overseeing such institutions as Sathosa, Lanka Sathosa, the Consumer Affairs Authority, Department of Weights and Measurements, National Enterprise Development Authority, the Registrar of Companies and the Department of Commerce.