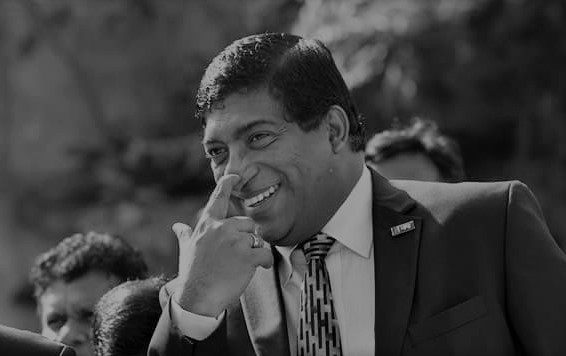 Image: Minister Karunanayake checking his nose to make sure is it growing!

The Centre for Policy Alternatives (CPA) has followed recent media reports of the proceedings of the Commission of Inquiry to investigate the issuance of Treasury Bonds with increasing concern. The reported allegations of financial misconduct and conflicts of interest are extremely serious and their political consequences graver. Whatever the outcome of the Commission’s proceedings., the allegations are of sufficient gravity to require the immediate resignation of Ravi Karunanayake MP, the Minister of Foreign Affairs.

The media reports of the on-going hearings of the Commission of Inquiry to investigate and inquire into the issuance of Treasury Bonds during the period of 1st February 2015 to 31st March 2016, (CoI), reveal that Mr Karunanayake is implicated in financial transactions with Mr Arjun Aloysius, a central figure in the high-profile and questionable issuance of bonds by the Central Bank. Witness testimony to the CoI states that a luxury apartment in Colombo was taken on lease by Mr. Aloysius and/or his representatives, and paid for on behalf of Karunanayake, who was then Minister of Finance, and his family. In recorded testimony given to the CoI on 2nd August 2017, Minister Karunanayake noted that it was his wife and daughter who found and procured this apartment and that he personally “knew nothing” about how the apartment he and his family resided in for nine months was paid for and procured.

[alert type=”success or warning or info or danger”]Without prejudice to the proceedings of the CoI, CPA finds the Minister’s testimony not only entirely implausible, but also deeply damaging to the credibility and reputation of the institutions of government.[/alert]

This is especially so for a government elected on a platform of good governance and anti-corruption. We firmly believe that this is a view shared by the majority of our fellow citizens, who are dismayed by the persistence of corruption and the current government’s woefully inadequate measures to address it.

CPA wishes to remind the government of its central promise to eradicate corruption at all levels of government and to hold to account anyone who is complicit without fear or favour. We call upon Minister Karunanayake to take the principled step of resigning from ministerial office forthwith, and to cooperate fully with on-going and any future investigations. We believe this is an essential prerequisite for restoring public confidence in the government’s commitment to its mandate, and we reiterate that the failure to do so will seriously impede the realisation of every other aspect of the government’s reform agenda.

Given the hope and expectation raised in 2015 regarding the restoration of good governance and the rule of law, the failure of Minister Karunanayake to resign, and the failure of the government to ensure his resignation, will risk unfavourable comparison with its predecessors. More critically, it will erode the credibility of our public institutions and processes in the eyes of citizens, and fatally undermine broader reforms.