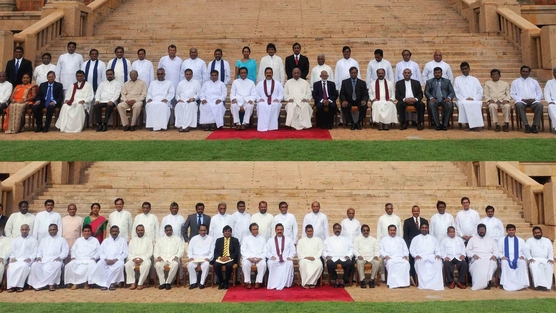 After recent discussions on Constitutional Reform, it was decided to launch an on line petition with regard to one vital reform. This is universally agreed to be essential, and we believe that there will at the most be just 225 individuals in Sri Lanka who will oppose it.

The provision that must be introduced into the Constitution is a mandatory cap on the number of Ministerial positions. The current situation, where the President may appoint as many Ministers as he wishes, and at various levels, leads to waste as well as inefficiency.

The cost of maintaining so many Ministries, as well as the large private offices of each Minister, is colossal. But even worse is the difficulty of ensuring consultation and coordination in subject areas that require coherent and consistent interventions.

We also have the spectacle of Members of Parliament urging that they be appointed Ministers. This is understandable because of the immense advantage Ministers have when it comes ensuring popularity. Given that many Ministers do not have enough to do, they see Ministries as instruments of enhancing their standing in their own electorates.

Given that there are so many Ministries, it is understandable that MPs cannot see why they too should not be elevated to enjoy similar powers of patronage.

When there is no Constitutional limit, and given the precedents of the past, it is difficult for the President to turn down such requests. We believe that, in acceding to this petition, Your Excellency will also be able to introduce better and more responsible systems of governance, and allow the Executive to fulfil its duties rather than become an instrument of electoral popularity.