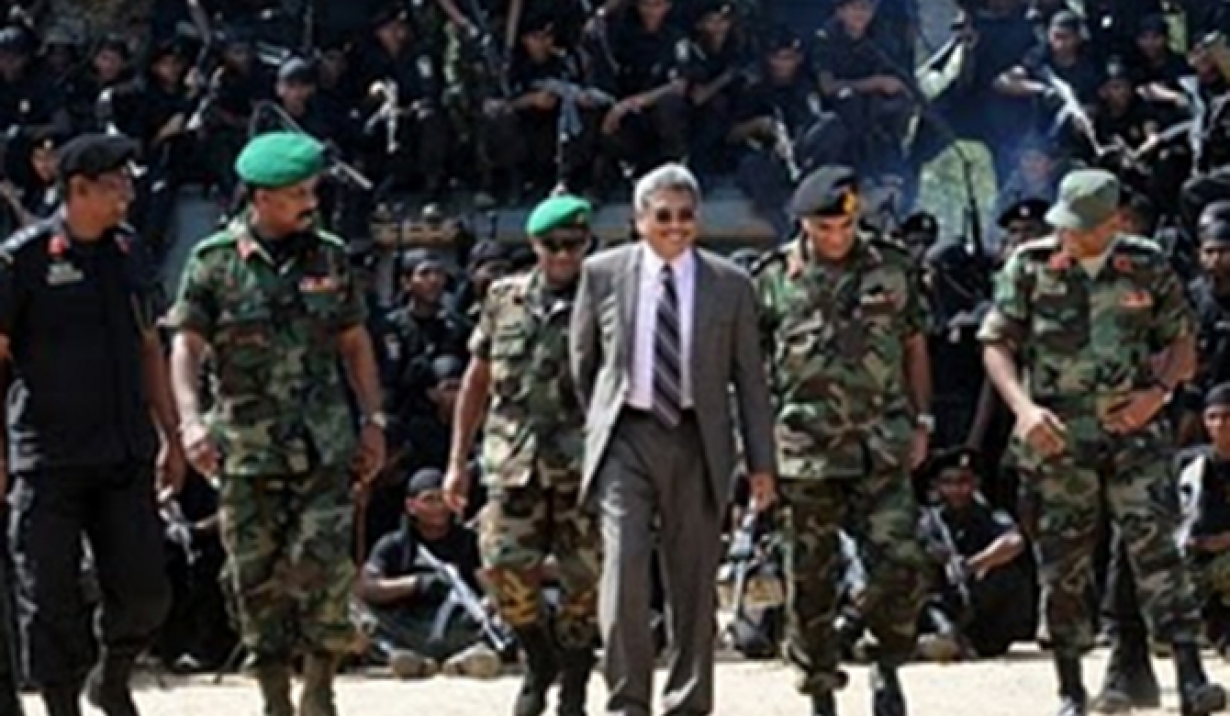 The relationship between Sri Lanka’s military politics is a topic that gets occasional media attention. However, there is hardly any serious scholarly work on the subject, despite the fact that maintaining a framework of balance in civil-military relations during and after the civil war has surely been a major policy preoccupation among the country’s civilian political leaders. This essay attempts to map out some key features of the recent dynamics in Sri Lanka’s civil-military relations.

As this essay will later suggest, the theme of civil-military relations also provide a new prism through which to view Sri Lanka’s contemporary politics in a manner substantially different from what we usually read in the media.

The topic of military’s role, or its absence, in Sri Lanka’s current politics has surfaced in a peculiar context. The emergence of a new political grouping called Viyath Maga, partly led by some very senior retired officers of the armed forces, to back the candidacy of Gotabaya Rajapaksa, the former Defence Secretary, to be Sri Lanka’s next president has aroused a great deal of interest and controversy. Rajapaksa himself is an ex-military officer. This group of officers was also in the forefront in the last phase of the war that crushed the LTTE’s insurgency and therefore, has built a reputation as ‘war heroes.’ They appear to think that because of their specific contribution to the defeat of the secessionist agency and the restoration of the island’s ‘sovereignty’, they have secured a special role to play in charting the country’s future political trajectories as well.

This feeling has been heightened by the insistence by the UN and powerful global states that Sri Lanka’s post-war peace building efforts should have a strong component of transitional justice and war-crime investigations. In this context, it is obvious that both, political and military leaders who led the successful counter-insurgent war against the LTTE have organized themselves as a lobby to protect their own interests, as individuals as well as a corporate entity. Sarath Weerasekera, the ex-Navy Commander, who became an MP at the parliamentary election of 2015, is playing the leading role in this effort.

However, what is new in the Viyath Maga campaign, of which Weerasekera is the main spokesperson, is that it has now launched a political campaign of retired military personnel. It is similar to a social movement, with an agenda to intervene in Sri Lanka’s forthcoming presidential and parliamentary elections. This is the main aspect of the issue that invites the interest of the political analyst.

A cautionary word is needed at the beginning, though. Sri Lanka’s armed forces and the judiciary are two public institutions that figure frequently in Sri Lanka’s media about their institutional role in changing the social and political landscape in the country. Other than mere reporting, the media does not seem to go deeply to analyze the important themes that such reporting highlights.

A major reason perhaps is the fear of unwelcome consequences of such analysis, which would be construed by the heads of those institutions as threats to their institutional autonomy. While one institution, the judiciary, is protected by some archaic practices arising from the belief that it is placed above critical public scrutiny almost as an institutional birthright, the other, the armed forces, operate on the assumption that any public scrutiny of its actions would amount to interfering with its functions of safeguarding national security. Thus, in this essay, I will be exercising a great deal of caution in my formulations and propositions, despite the fact that I am a political analyst by training and vocation.

What is it that the Viyath Maga movement has to command the attention of a political analyst? The main reason is that it constitutes an entirely new phenomenon in Sri Lankan politics that has the potential to re-shape the civil-military relations that Sri Lanka’s democracy has maintained throughout the post-independence period. It is also a development that has the capacity to alter the balance in Sri Lanka’s state structure, by changing the composition as well as the role of conventional democratic institutions of governance such as, the Cabinet, Parliament and the Judiciary.

In my view, leaders of all civilian political parties, from the UNP, SLFP and SLPP downwards, should draw their attention to this new development too, while fighting their intense and internecine electoral battles.

Since independence, Sri Lanka has had a remarkable record of maintaining its institutional structure of parliamentary democracy, despite severe setbacks in managing ethnic relations, social conflict, and the welfare state. The development of a strong multi-party system, with two dominant parties, and the presence of a vibrant civil society, a widespread Left movement, an active trade union movement and a politically alert citizenry with a very high degree of electoral participation have been its key causes as well as features. The British tradition of strong civilian control of the military has also been a feature of Sri Lanka’s post-independence democracy.

This is also where Sri Lanka and India radically differed from Pakistan and later Bangladesh. In both countries, within ten years of independence, civilian governments were overthrown by politically ambitious groups of military officers, amid the failure of civilian political leadership to consolidate and institutionalize democratic governance.

Meanwhile, the two failed military coup attempts in 1962 and 1966 probably inaugurated a new thinking, even a consensus, among Sri Lanka’s civilian political leaders, both in and out of power, over one important point about managing the post-coup state in Sri Lanka. It is about how to keep the armed forces and the Defence Ministry under strict civilian control. How they did it so successfully is a theme that requires a separate essay and a fresh research programme. Suffice it to say that this bi-party consensus between the UNP and the SLFP on managing civil-military relations is a truly remarkable dimension of the survival of Sri Lanka’s democracy, even during the four-decade long period of two civil wars, starting with 1971. This is also a theme that has not received adequate attention or appreciation in Sri Lanka’s political science literature.

Meanwhile, a unique change began to occur in the nature of civil-military relations, not during the civil war, during which the military has expanded enormously in strength, but after the war when the national-security burden of the military became less salient.

This somewhat unusual phenomenon was marked by the emergence of the Ministry of Defence as a very powerful player in Sri Lanka’s post-war politics. The Defence Ministry continued to remain under the civilian President Mahinda Rajapaksa. However, its de facto head was Gotabaya Rajapaksa, the Defence Secretary, who happened to be the civilian President’s younger brother. Gotabaya Rajapaksa had of course become a civilian by that time, but his military credentials and military mindset made him more a military leader than a civil bureaucrat.

To state a long story in brief, what appeared during the years 2009-2014 was setting in motion a new political role for the defence establishment with a decisive role to play in Sri Lanka’s public policy, crucially in areas such asdefence, law and order, judiciary, foreign relations and diplomacy, education, urban development, cultural affairs, human rights and peace building.

It is the regime change of January 2015 that halted the consolidation of this unusual tendency in politics and governance in Sri Lanka’s post-war politics. Amidst all its dismal political failures, the yahapalanaya government of President Sirisena and Prime Minister Wickremesinghe should be given due credit, at least belatedly, for arresting this tendency with tact and care as part of their overall project of restoring democratic governance in post-war Sri Lanka. This is also a theme that warrants a research paper of substantive length.

Meanwhile, Sarath Fonseka, the military commander who led the successful ground war against the LTTE, constitutes another phenomenon that warrants analysis in relation to civil-military relations in Sri Lanka’s post-war politics.

Even when he was leading the war under the political and institutional supervision of the two Rajapaksa brothers, there were signs, particularly in 2008 and 2009, that the latter were cautious of the personal ambitions of Fonseka. By this time, Fonseka had acquired an enormous authority through the army’s role in the battlefield. There was even a joke among diplomats and journalists in Colombo that the three most powerful men in the country at the time were Sarath Fonseka, Gotabaya Rajapaksa and Mahinda Rajapaksa, in that order. The fact that soon after the war ended, the Rajapaksa brothers took the unprecedented and surprising decision to swiftly remove Fonseka from his powerful military leadership position and then to ‘disarm’ him by giving him a dubious promotion, tells us, in retrospect, that that decision probably had important political grounds of course mired in, or presented as, personal rivalries.

The Fonseka saga did not end there. It has had two very significant sub plots. The first is Fonseka’s decision to challenge President Rajapaksa at the presidential election of 2009. In that highly dramatic election campaign, what became highlighted were the personal rivalries and animosities between Fonseka and the Rajapaksa brothers. Fonseka’s candidacy received very strong backing of the UNP, the main opposition party and the opposition. He was the joint opposition challenger to the formidable incumbent President, Mahinda Rajapaksa. Towards the end of this highly acrimonious election campaign, there were signs, noted by only a very few journalists and observers at the time, that the UNP leader’s enthusiasm for ensuring Fonseka’s electoral victory was waning. And during the last two weeks of the election campaign, Rajapaksa campaign’s attack on Fonseka focused primarily on one point, the danger of a military government emerging in Sri Lanka under Fonseka’s leadership. There were also rumours in Colombo that the Ranil Wickremesinghe camp was feeling uneasy about the key role that Fonseka had assigned to a circle of ex-military officers, personally loyal to him, to organize not only the final phase of the election campaign, but also the task of making plans for the taking over of power after the election victory and even organizing the new government. The latter task Fonseka seemed to have initiated on his own, without consulting the UNP leadership.

These were of course rumours. They nevertheless point to the possibility that there probably was a last minute understanding between Mahinda Rajapaksa and Ranil Wickremesinghe that the winner of the crucial presidential election of 2009 should be a longstanding civilian political leader. This is of course a hypothesis the testing of which requires qualitative interviews with Mahinda Rajapaksa, Ranil Wickremesinghe and Sarath Fonseka.

How have President Sirisena and Prime Minister Wickremesinghe been managing the Sarath Fonseka phenomenon? When we look at it from the perspective of civil-military relations, an extremely interesting narrative can be constructed. The President and the Prime Minister seem to continue the old consensus among Sri Lanka’s civilian political leaders that politically ambitious ex-military officers should be kept under strict civilian control. Giving Sarath Fonseka the promotion to the rank of Field Marshal and then insignificant Ministerial positions, cannot but be elements of some shrewd political thinking on the part of both President Sirisena and Prime Minister Wickremesinghe.

This is the backdrop against which Gotabaya Rajapaksa’s current presidential ambitions are being promoted by an organized group of ex-senior military leaders who themselves have unconcealed political ambitions. It would be most interesting for political analysts to watch how President Sirisena, Prime Minister Wickremesinghe and ex-President Mahinda Rajapaksa – the three senior most civilian political leaders who also lead Sri Lanka’s three leading civilian political parties – would handle this emerging situation.