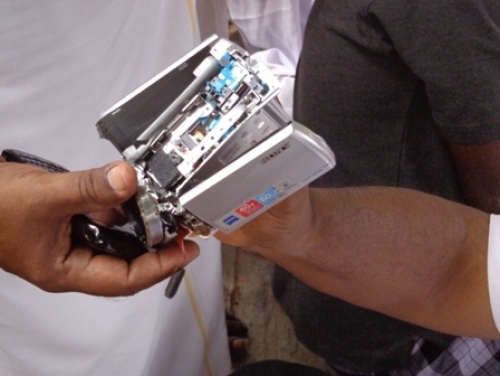 People together with politicians engage in hunger strike protest on demanding to release lands and resettle people at the high security zone in the Waligamam north this afternoon.
Due to the attack tense situation reported in the area. However people were confident on their protest. According to the sources hunger strike protest commenced at 8.30 am this morning. Opposition leader Ranil Wickramasinghe was also present at this site.

More than thousands of people were present at this hunger strike protest. A group comprise with 6 members suddenly arrive to the location ordered people to evacuate from the site. On this time parliamentarians requested police officials to arrest the suspects cause disturbances to the peaceful protest.

However police personals have arrested a suspect and others were taken out by the military personals. Military personals carried out attack against secretary of the Mannippai Divisional Secretariat and the member of the Waligamam North Pradeshiya Sabaha.

Journalist of the Uthayan news paper was also attacked and suspects have taken away his camera. Members of the Tamil National Alliance have field complaint on this alleged attack at the Thellipalai police station.

Military personals have take away the “memory card”  and return back the camera towards Uthayan news paper journalist.
lankasrinews