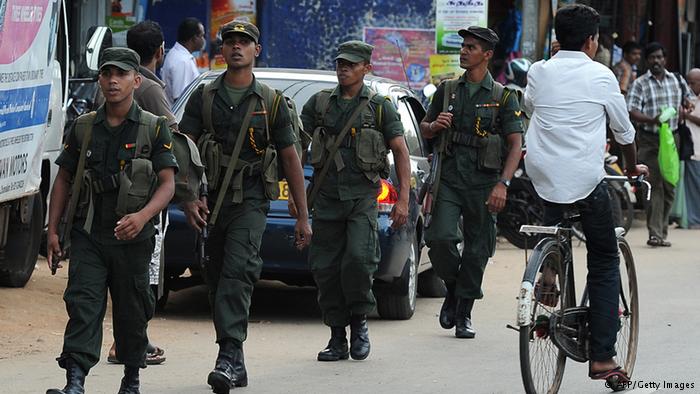 After nearly three decades of conflict, Sri Lanka is set to hold elections in the island’s former war zone. But experts doubt whether the poll, already marred by allegations of intimidation, will ease ethnic tensions.

For 25 years Sri Lankan armed forces fought against militant separatists seeking to create an independent state for the Tamil-speaking minority in the north and the east of the island nation. Only in May 2009 did the central government in Colombo, led by the ethnic Sinhalese majority, manage to recapture the last area controlled by the Liberation Tigers of Tamil Eelam (LTTE), putting an end to a civil war that had cost the lives of more than 80,000 people, according to United Nations estimates.

More than four years later, the South Asian nation is set to hold its first-ever provincial council vote in the former northern war-zone. After decades of increasing demand for decentralization, an Indo-Sri Lankan accord in 1987, which later became the 13th Amendment to Sri Lanka’s constitution, led to the creation of provincial councils.

Ever since, eight provinces have had elected councils except for the Northern Province, which continued to be ruled directly by the president, adding to the importance of the upcoming poll on September 21.

The main contenders in the upcoming vote are the country’s main Tamil party, the Tamil National Alliance (TNA) – which selected retired Supreme Court Judge C.V. Wigneswaran to run for chief minister – and the ruling United People’s Freedom Alliance (UPFA), which is fielding candidates from the Eelam People’s Democratic Party (EPDP) as well as the Sri Lankan Freedom Party (SLFP).

There are a number of challenges in the Tamil-dominated North, ranging from the militarization of the region, an absence of land rights and job opportunities, to demands for a devolution of powers to the province and the reconciliation process.

Military involvement
According to political analyst Alan Keenan, Sri Lanka project director at the International Crisis Group, the TNA is expected to win a clear majority of the council seats. The historic vote is regarded by experts as an indicator of the state of the ethnic reconciliation and political progress after the decade-long conflict.
But the election campaign has been overshadowed by allegations of the military’s involvement in the electoral process. In a letter to Sri Lankan President Mahinda Rajapaksa dated September 9, TNA leader R. Sampanthan accused the military of trying to influence the 714,000-strong mainly Tamil electorate, threatening TNA party members and supporting candidates of Rajapaksa’s ruling UPFA alliance.

“It is clear that there cannot be a free and fair election if the military continues its interfering presence in the Northern Province,” Sampanthan wrote, calling upon the president to relegate the army to the barracks. The government, however, countered the allegations saying that they are “baseless” and that they had already reduced the military presence in the region.

Ongoing power struggle
Achieving greater autonomy for the Tamil-majority region has been one of the major political aims of the TNA. The party states in its manifesto that it “firmly believes that sovereignty lies with the people and not with the state. It is not the government in Colombo that holds the right to govern the Tamil people, but the people themselves.”

Keenan therefore believes that a TNA-controlled council will likely press to reduce the unprecedented political and economic power of the military in the north and try to claim powers given to provinces under the constitution. “While the council will struggle to establish any significant degree of autonomous power, it may be able to slow or block some government policies in the north.”

Dozens of people are dead and several escaped prisoners are at large following a major prison riot in Sri Lanka. The prison holds some former Tamil rebels, but it is not clear whether they played a role in the violence. (10.11.2012)

However, during a campaign rally President Rajapaksa was quoted as saying that the TNA was misleading the people by promising self-government and independence and that holding an election in a region that was “subjugated to terrorism for 30 years was a great accomplishment.” Furthermore, in a recent interview with the “Hindustan Times” the president criticized the TNA’s manifesto calling it “a clear attempt by the TNA to divide the country.”

In light of these differences, it seems unlikely that the election will lead to a greater degree of autonomy in Tamil-majority regions. Although the ruling coalition in Colombo had promised to share limited power with Tamils, government spokesman Keheliya Rambukwella announced in June plans to scrap the land and police powers of the councils.

An ‘increasingly authoritarian’ government
The Sri Lankan government has been under heavy criticism from the international community. After a week-long visit to Sri Lanka in August, UN High Commissioner for Human Rights Navi Pillay accused Colombo of “heading in an increasingly authoritarian direction,” with human rights activists, journalists and ordinary citizens facing growing military harassment four years after the end of the civil war. “The war may have ended, but, in the meantime, democracy has been undermined and the rule of law eroded,” Pillay said.
This view is supported by Keenan who believes the political situation in Sri Lanka has grown increasingly complex over the last year and a half. “In addition to the long-standing and deepening political alienation of Tamils, Sri Lanka’s Muslims are also increasingly restive as they bear the brunt of a vicious hate campaign from militant Buddhist groups who have the tacit support of important sectors of the government.”

The provincial elections come less than two months before a Commonwealth Heads of Government meeting is set to take place in Sri Lanka. Human rights organizations have already urged world leaders to boycott the summit, thus pressurizing Colombo to promote ethnic reconciliation and look into allegations of war crimes and disappearances during the final stages of the war in which up to 40,000 people are believed to have been killed.

According to Keenan, the government has so far failed to acknowledge that war crimes were committed by its troops or that the civil war emerged out of “the political marginalization of Tamil-speaking people and the discrimination they suffered.”

The Sri Lanka expert believes that a return to an organized Tamil militancy is not likely in the foreseeable future. “Memories of the suffering from the war are still too strong, and there is no organization capable of leading such a struggle,” Keenan said.
DW