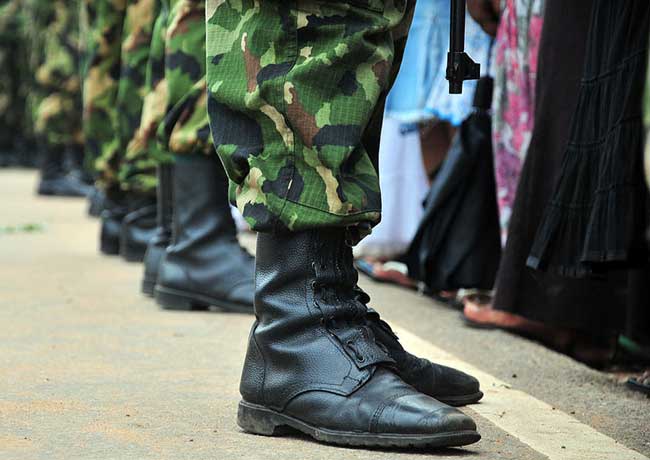 By D.B.S.Jeyaraj
The Tamil National Alliance(TNA) which won eleven seats in the recently concluded elections to the Eastern Provincial Council is currently facing a serious crisis of a bizarre nature.

The premier political formation of the Sri Lankan Tamils that garnered almost 90 % of the Tamil votes in the East has to now cope with the task of “quarantining” the newly elected councillors in safe and secure locations in a bid to ensure that the provincial legislators are not “pressured” into joining the United Peoples Freedom Alliance (UPFA) Administration to be set up soon.

While political manoeuvres to entice members of one party into supporting another in the aftermath of an election to cobble together a viable majority has been a common phenomenon in India and Sri Lanka the crucial difference in this exercise is the involvement of personnel believed to be operatives from Sri Lanka’s military intelligence.

These suspected military intelligence personnel have approached some newly elected TNA provincial councillors and exerted pressure through a mixture of “carrot and stick”methods to make them extend support to President Rajapaksa and join the ranks of the UPFA .

It is learnt that five of the eleven TNA eastern province councillors have been approached in this manner by “authoritative”personnel introducing themselves as officials from the Presidential secretariat. At least two of these officials describing themselves as being from the Presidential secretariat have been identified as military intelligence operatives attached to the Security Forces Head Quarters (East)based at Welikanda.

The identified operatives use the nom de plumes Shantha and Bertie it is said.

The MI operatives are said to be functioning in teams and using several vehicles. The modus operandi seems to be that of suddenly descending – uninvited and unannounced – on the residences or party offices of the Eastern Councillors and engaging in earnest conversation with them.

The imposed conversations are a blend of sweet talk and hard talk aimed at enticing the councillors into crossing over from the TNA and joining the UPFA ranks. Coercion,Cajoling and Coaxing are prevalent.

In a not so subtle attempt at exploiting perceived ethnic rivalry between Tamils and Muslims in the East, the TNA representatives are told that if Tamils do not lend support to the UPFA in the hung Eastern Provincial council the Govt would be compelled to come to an agreement with the Sri Lanka Muslim Congress.

This would result in the Eastern administration being dominated by Muslims which would result in the Tamil people of the East being discrimated against and neglected. In order to prevent this Muslim take –over right thinking Tamils should leave the TNA and support the UPFA thereby containing Muslim influence and power, the councillors are being told.

Veiled threats are also issued. If the UPFA is unable to form a viable administration the Tamils will be blamed for it and the TNA councillors will have to face the wrath of the nation , it is being said.

Among the five eastern TNA councillors approached so far three are from Batticaloa district and one each from Amparai and Trincomalee districts.

The Batticaloa district councillors so approached are Indrakumar Prasanna,M. Nadarajah and Krishnapillai alias Vellimalai. Murugesu Rajeswaran from Amparai and Kumaraswamy Nageswaran from Trincomalee are the other two.

These councillors have also been offered carrots and threatened with sticks on an individual basis. The offers are generally of lands,money, houses and vehicles. One councillor a building contractor was offered the “carrot” of huge government construction contracts . Another councillor was threatened with the “stick “ that his young son would be taken into custody for alleged links to the Liberation Tigers of Tamil Eelam (LTTE)

The experience of Nageswaran in Trincomalee was somewhat different.

Nageswaran a displaced resident of Sampoor living in an Internally Displaced Persons (IDP) camp. He has organized the displaced Sampoor people into a cohesive organization and spearheaded a concerted effort to resettle them in their original homes and habitat. One reason for his electoral success was the overwhelming support Nageswaran received from Sampoor IDP’s.

When asked by the persons who visited him what he required as inducement to cross over Nageswaran had shown them copies of the Gazette proclamations which appropriated five Grama Sevakha divisions in the Sampoor region for Government use as security and industrial zones. He had then said these gazette proclamations should be rescinded and he and fellow Sampoor residents should be able to return and resettle in the lands where they had lived from time immemorial.

The officials had walked out in a huff. Later some civil affairs officers of the military were engaged in efforts to mobilize some IDP’s in the Kiliveddy camp to demonstrate urging that the TNA and Nageswaran should support the UPFA at the Eastern provincial council.

When information about these attempts by suspected military intelligence operatives to entice the TNA was conveyed to Trincomalee district MP and TNA leader Rajavarothayam Sampanthan, the veteran Tamil politician summoned all the elected councillors to Trincomalee.All eleven attended the meeting in which some former and present TNA parliamentarians also participated.

The councillors who had been approached related their experiences in detail at the meeting. When some expressed qualms about returning to their homes and being rendered vulnerable to further attempts by the operatives, Sampanthan appreciated their position and arranged for “safe houses” in Trincomalee where they could stay for some time.

A comprehensive memorandum on the issue is being prepared to be sent to President Rajapaksa as the suspected military intelligence operatives had posed as officials attached to the Presidential secretariat.

The TNA also intends disclosing details of these attempts publicly by convening a press conference in Colombo.

It is learnt that four of the eleven TNA councillors are in Colombo at present while the other seven are in Trincomalee.

It is indeed a bizarre situation where elected representatives are forced to flee from their residences and seek refuge in safe houses elsewhere to escape the overtures of military intelligence operatives masquerading as officials from the Presidential secretariat.