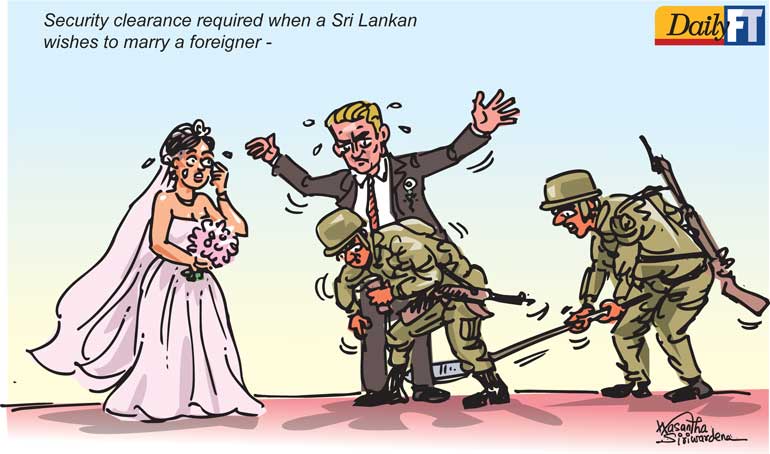 The country today stands at a dangerous juncture of militarizing and ‘securitizing’ the most basic freedom of its people. Those are liberties that people in any civilized nation take for granted.

A few other decisions can be as patently anti-democratic and laughably petty-minded as the latest government circular requiring Sri Lankan citizens marrying their foreign spouses to wait for a ‘security clearance report’ from the Ministry of Defence.

Last week, the Registrar General issued a circular to all district registrars and additional registrars, requiring that any Sri Lankan citizen who wishes to marry a foreigner obtain a ‘security clearance report’ from the Ministry of Defence, before proceeding to the registration of the marriage.

Until now, under the existing procedure, only a valid passport, a certification of confirmation of civil status and a birth certificate are required to register a marriage. According to the new requirements set out by the circular, the original copy of the certificate obtained from the security authorities of the relevant country should be sent to the Civil Registration Unit of the department through the Sri Lankan party or an agent indicating there are no convictions for any offence during the past six months.

“The country today stands at a dangerous juncture of militarizing and ‘securitizing’ the most basic freedom of its people. Those are liberties that people in any civilized nation take for granted.“

Obtaining the ‘Security Clearance Report” should proceed through the department, after which, a licence will be issued to the Additional District Registrar to register the marriage.

Registrar General W.M.M.B. Weerasekara has stated in the circular that the decision on new requirements was taken according to an agreement between the Ministry of Defence and the Department of Immigration and Emigration. The latter, a civilian institution was brought under the purview of the Ministry of Defence by President Gotabaya Rajapaksa.

Sunday Times quoted Registrar General Weerasekara as saying: “We have seen some foreigners wanting to marry Sri Lankans here with ulterior motives like engaging in drug trafficking and money laundering. We want to make sure those foreigners who want to marry locals here are not involved in such activities.”

By grotesquely generalizing a peripheral issue – a few West African scammers – and unsubstantiated claims that investigations into Easter Sunday attacks have revealed that ‘some parties took advantage of the loopholes in the current marriage registration procedure’, the government has managed to deprive the right of all citizenry to marry his or her partner, unhindered by the government interference. (Easter attacks were carried out by Sri Lankan Islamist fanatics and not the foreigners. The politicization of intelligence to suit political narrative has not done any good for the credibility of Sri Lankan agencies in the eyes of their foreign counterparts, especially those of practising democracies).

In the first place, the latest circular is a gross violation of the most fundamental freedom of the Sri Lankan citizens and is an interference in a matter that is an utmost personal choice. Marriage is a personal matter in which a government should not have any business. Democratic societies are founded on the basic understanding of the limitations of the government’s control over its citizenry. That social contract between the ruler and ruled is increasingly void in Sri Lanka’s militarized regime structure.

“This decision also blurs the very idea of citizenship and legal rights and protections accorded to citizens. it effectively turns citizenry into serfdom.”

The country today stands at a dangerous juncture of militarizing and ‘securitizing’ the most basic freedom of its people. Those are liberties that people in any civilized nation take for granted.

This decision also blurs the very idea of citizenship and legal rights and protections accorded to citizens. it effectively turns citizenry into serfdom.

Interestingly in early Medieval Europe, serfs could not contract legal marriages without the consent of the feudal lord.

Sri Lanka is walking back on the time and civilization as its citizens would have to seek ‘clearance’ from the new lords in the defence ministry to tie the knot.

Second, the latest measure is an outgrowth of militarization of the Sri Lankan state under the current administration. President Rajapaksa appointed en masse retired and serving military generals, and brought civil institutions under the Ministry of Defence. The militarization of the state first undermined the civilian bureaucracy and civilian institutions. It is now threatening to subordinate the civil society to diktats of a militarized regime. It is undermining the very fabric of civil society and portends a wholesale militarization and securitization of all areas of public lives, even the most intimate and personal ones of the citizens.

As the president’s economic policymakers have run the economy to the ground, military generals apointed by the president to every nook and corner of the bureaucracy are struggling to find a ‘mission’ in a no-war situation. Conceptual limitations of those whose formative years spent on the war and the Rajapaksa’s glorification of a non-existent military superiority over civilian expertise have created a toxic fireball. Civil freedoms will be scorched in this inferno.

The overarching sense of entitlement of the policymakers to do as they wish, without scant regard to basic niceties governing a free society is self-evident in the latest circular. That betrays the leverage the military and ex-military wield over a subordinate civil society. Asia’s oldest democracy, and a country that kept a vibrant civil society intact even during the worst of its turbulent history is caving in to a militarized capture of its soul and spirit from within.

Third, this decision is also disingenuous. Gotabaya Rajapaksa as the defence secretary, which he held on to while being a dual citizen of the United States made it extra difficult for fellow Sri Lankans to obtain dual citizenship. A faulty excuse of national security was cited. The result was many Sri Lankans who applied for it have been waiting for years.

Now the latest circular sounds doubly hypocritical. The first lady is a dual citizen. The government removed an earlier restriction on dual citizens to hold public office in order to enable Basil Rajapaksa to enter Parliament. In the meantime, the regime has securitized yet another fundamental right, the marriage of Sri Lankan citizens.

Like much of the track record of the current regime, this decision that robes Sri Lankans of the right to marry unhindered is both a tragedy and a farce.

Fourth, practical implications of this circular, if it ever implemented, would be devastating. First and foremost, most liberal democracies are unlikely to share information of their citizens with the government of Sri Lanka. (Recently, Scotland Yard suspended cooperation with the Sri Lankan Police citing right abuses.)

The lack of cooperation or a complete snub from many democracies would effectively leave many would-be couples in limbo, at the mercy of generals and bureaucrats.

Also, antiquated mechanisms in much of the developing world would result in protracted delays. Sri Lanka’s own system is grossly inefficient and corruption-riddled. Each Sri Lankan who wishes to marry his or her foreign partner would be a victim of that system. Given my brother’s two year wait for dual citizenship, that could be a much longer wait for most Sri Lankan nationals and their foreign partners.

This is a callous policy and it should be defeated. Sri Lankans should not let themselves become serfs in their own country. Given the manifest undemocratic character, the circular would likely be challenged in the Court. It falls on the judiciary to defend the people’s right to tie the knot unhindered. However, since the passage of the 20th amendment, the judiciary is among the institutions that have seen a major erosion of independence. Therefore, the judiciary position would be predicated on how strongly the circular is entrenched with the interests of the political leadership and their acolytes.

That however should not be a reason for the civil society and the progressive politicians to expose the grotesqueness of the government’s move. Sajith Premadasa and rank and file of Samagi Jana Balawegaya may have an opportunity to prove the bare minimum of liberal credentials. The JVP may pick the tab.

However, as draconian as it is, this latest measure of a circular is a symptom of an ever-worsening ailment of the Sri Lankan state. Curing that would be in the long haul and might need to come to grip with the worst of primordial impulses that voted to power a blighted leadership. In the meantime, the civilized world should view a government with as much contempt as it is infringing on the most basic of civic freedom of its people.