Militarization as a way of life: an ‘Orwellian’ note from Kilinochchi 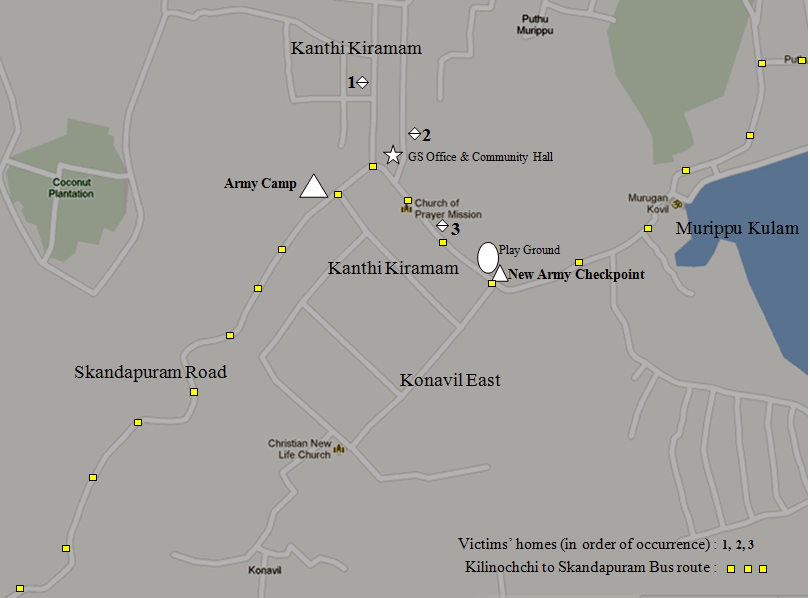 By The Social Architects

Even though the protracted internal armed conflict has ended, community members have been unable to return to their day-to-day lives. Under the administration of Mahinda Rajapaksa, Sri Lanka’s militarization has continued unabated. The Sri Lanka Army (SLA) has established numerous checkpoints and camps near peoples’ homes. Military personnel frequently patrol these areas – day and night. Sadly, the military’s intrusion into practically all aspects of civilian affairs remains a way of life in the conflict-affected North and East.
At the entrance to Kanthi Kiramam (Kilinochchi), there is a small army camp. Members of the 7th Battalion of the Sri Lanka National Guard (7SLNG) reside there.[1] A checkpoint is located on the other side of the camp, adjacent to a bus stop. At least three members of the military are actually living at that checkpoint. A brief history of this checkpoint may be of interest to both domestic and international observers.

To be clear, this is an important location; community members in Kanthi Kiramam and Konavil East use this bus stop. People sometimes have to wait for the bus for extended periods of time, so a range of topics are consistently discussed at this key area. Moreover, such a space is crucial given the restriction on the right to assemble in both private and public spheres. Students, young girls and community leaders gather there on a regular basis as a form political engagement, to discuss all kinds of topics, ranging from the trivial to the political (such as the upcoming provincial council elections).

This has disrupted peoples’ daily lives, as people are now reluctant and afraid to use this bus stop. Moreover, a playground was also located in this area, but now fewer young people and children are playing there.

The significant encroachment on peoples’ lives through checkpoints has institutionalized the government’s capacity to surveil and control the (targeted) ethnic Tamil population.

People are afraid of the military.

In terms of location and surveillance, this is a strategically important area. From this recently installed checkpoint, the military is able to monitor both Kanthi Kiramam and Konavil East at the same time.

As a justification, military personnel told community members that such a checkpoint is necessary in order to curb the illegal excavation of sand.

Evidently, military personnel were not interested in what community members thought.

More than 185 families are living in Kanthi Kiramam.[2] These houses are located in an area which is approximately 400 meters north of Skandapuram Road (outside of Kilinochchi town). There is a community hall and a Grama Sevaka office near these homes.[3]

The military maintains a strong presence in this densely populated area. In the evenings, military personnel frequently loiter near the community hall for extended periods of time.

A Return of Mystery Men?

On March 14 and March 15, 2013, unidentified people went to Kanthi Kiramam and threatened community members. More specific information is recounted below.

On March 14, 2013 at 10pm, two unidentified persons wearing black clothing approached a community member’s house and called out to him in broken Tamil. When the man came out of his house, the intruders told him to “go back inside.” As a result, the community member went back inside his house.

Later, in another house about 500 meters from where the first incident occurred – while everyone was asleep – one of those very same persons[4] went and grabbed the neck of a twelve-year-old girl. The assailant told family members, “If you shout, we will cut her.” The assailants continued to threaten family members and used the child as a human shield.

Once the girl’s brother discovered what was happening, he started shouting. At that time everyone in the house woke up and started to scream. The mysterious people subsequently ran away.

After about thirty minutes, the assailants returned. They lit up the area with a torch light and called upon the husband to come out of the house. When the man came out, one of the assailants picked up an axe, which had been left just outside the house. The assailants ordered the man to have his wife come outside, but the man did not comply. When the wife became aware of what was happening, she began shouting.

Once the neighbors heard the wife shouting, they rushed to the house. Then the assailants fled the scene again. The second time the perpetrators came, they covered their faces with black cloth. Community members heard them speak in broken Tamil.

After this incident, the affected community members went to the army camp nearby and lodged a complaint. Consequently, in the evenings some army personnel have been stationed along Skandapuram Road and several bylanes throughout the village.

The following day, an unusually high number of military personnel were patrolling the area.[5]

Nevertheless, on March 15, 2013 at 10.45pm two mysterious people approached a Female-Headed Household in the area.[6] The assailants opened a temporary door and tried to enter the home. Once those who were inside the house heard people trying to enter, they started to scream. Then the assailants fled the scene. 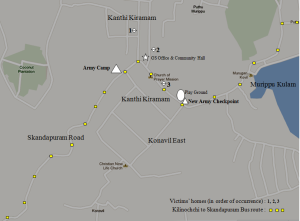 Since these incidents occurred, state security personnel have made virtually no effort to find the assailants; no one has been arrested for these crimes. Many community members believe that army personnel are responsible for these criminal acts.

Since there are army installations on both ends of the village, the fact that mysterious people are still allowed to roam freely has created a palpable sense of anxiety throughout the community. Further, army personnel have clearly stated that if community members ever have visitors, then that information should be reported directly to the military. Yet, when unknown assailants come and bother people at night, army personnel appear to be either unable or unwilling to take resolute action.

It is TSA’s contention that the recent problems in Kanthi Kiramam are directly related to the fact that community members raised concerns about the building of the checkpoint. Community members complained, but – perhaps more importantly – they did not believe that the government really cares about cracking down on illegal business activities.

Does the government of Sri Lanka really want to monitor illegal sand excavation? Or do they want to make sure that community members don’t forget that the military is watching? Or that the conclusion of war has resulted in de facto military occupation throughout the Northern Province?

Whether these recent developments portend a new era of mystery men – a return of the Grease Yaka – remains to be seen. Nevertheless, it looks like these acts of violence are now being used to justify the checkpoint, as the military now seems to be citing security concerns as justification for continued state surveillance.

The final report of the Lessons Learnt and Reconciliation Commission (LLRC) calls upon the Government of Sri Lanka (GoSL) to reduce the army’s presence in the North and the East. Such a measure would allow people to move freely and help them to regain some semblance of normalcy post-war. Some people wonder if the government intends to place even more members of the army in this area – using the abovementioned incidents as a pretext for a heightened military presence. Were that to happen, such actions should be met with skepticism because this is a regime that simply cannot be trusted.

[1] More than twenty members of the SLA reside in this camp. An officer holding the rank of “Major” is also stationed there.

[2] The community members/victims involved in these incidents work as day laborers, meaning that most of these people live below the poverty line.

[5] Evidently, state security personnel were only suspicious of civilians.

[6] This house is approximately 700 meters from the house where the previous incident occurred.