Militarisation as Panacea: Development and Reconciliation in Post-War Sri Lanka 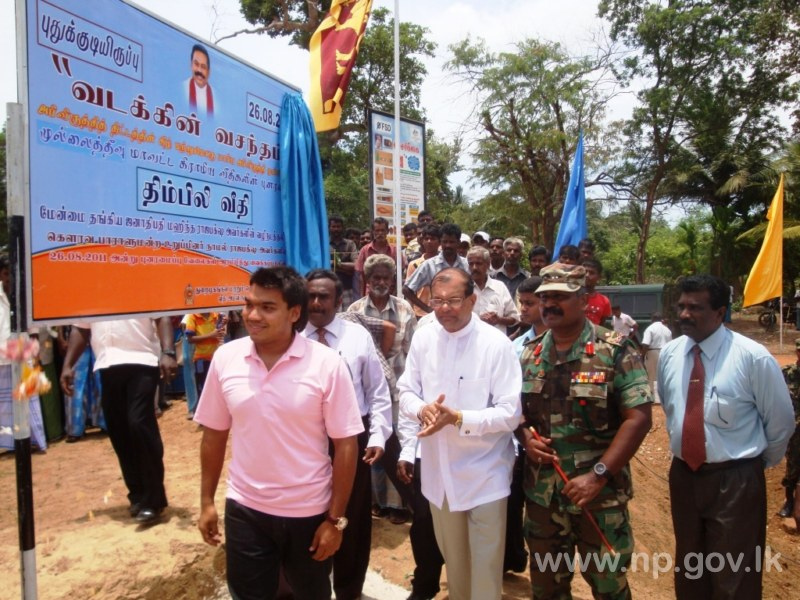 Is it possible to secure the dignity, rights and well-being of a conflict-affected population by incorporating them into a military juggernaut that has quickly grown to dominate all spheres of life?
The creeping militarization of Sri Lanka which followed the end of armed conflict in 2009 has now, four years later, become normalised and entrenched. During the years of the war the impact of militarization was felt mainly in the North and East. However, following the end of the war, systematic militarization has been taking place throughout the country. Its impact on the lives of those in conflict-affected areas is visible and severe. Driving through Kilinochchi, Mullaitivu and Vavuniya gives the lie to repeated denials by the government there is a heavy military presence in the North, particularly in comparison to other parts of the country. For instance, the camps of the 22nd Battalion, Gajaba Regiment, 574 Brigade, 682 Brigade, 681 Brigade, 591 Brigade, 59 Division, 14th Battalion, 68 Division, HQ 571 Brigade, 573 Brigade, 561 Brigade and 682 Brigade are just a few that are visible to any visitor to the area.

To borrow Cynthia Enloe’s definition, “militarization is the step-by-step process by which something becomes controlled by, dependent on, or derives its value from the military as an institution or militaristic criteria”. As she reminds us “what has been militarized can be demilitarized. What has been demilitarized can be remilitarised”. Examining the process of militarization currently under way in Sri Lanka, Enloe’s observation that, “militarization does not occur simply in the obvious places but can transform the meanings and uses of people, things and ideas located far from bombs or camouflaged fatigues”, is particularly relevant, because in Sri Lanka one has to look beyond the visible and most obvious to understand the rapid militarization that has taken place since the end of the war.

Security-development nexus
Militarization in the North is taking place in complex ways at multiple levels. In addition to the noticeable physical presence of the camp or civil affairs office, it is the military’s involvement in the civil administration, development activitiesand commercial activities that is the gravest cause for concern. As early as 2009, signalling the increased involvement of the military in post-war development, the Northern Security Forces Commander stated that with the elimination of terror in the north, “security forces in the North will be engaged in a new role of developing the region”. The military began to play an active role in development activities, to the point where permission to implement projects or development work was subject to authorisation by the military, and official permission to travel into the Vanni to work was refused to certain individuals deemed to be a threat to national security.

The government may argue that the military is merely ‘assisting’ the civil administration to rebuild the north, or is being utilised to implement activities launched by other ministries. But the fact that a committee in the North that came together to prepare development plans for 2013 was convened at the Headquarters of 55 Division in Vettilaikerny and chaired by the commanding officer is illustrative of the unequal and uneven balance of power between the military and civil administration. The existence of a weak civil administration as a result of armed conflict is used to justify military involvement in, and even take over of activities and duties performed by civil authorities not only in the North but also in other parts of the country.

For instance, it was reported that due to the failure of the Colombo Municipal Council (CMC) to manage Viharamahadevi Park in the centre of the city, the Urban Development Authority (UDA), which is within the purview of the MOD, has placed the park under the supervision of the Navy. Instead of strengthening civil administration and dealing with allegations of corruption in the public service, the government uses allegations of corruption and a weak administrative service to justify the military’s involvement.

Entrenchment of militarization
The militarization of civil administration has been internalised both by government officials and the public to the extent that in January 2011, when a number of abductions and extra-judicial killings took place in the Jaffna peninsula causing panic amongst the population, the Government Agent of Jaffna promptly met with the army commander of the area to discuss the security situation rather than with the police. In response to the deteriorating security situation, the police and army launched joint patrols in Jaffna and reportedly stepped up surveillance. It was also the army, rather than the police, that held public meetings in Jaffna on enhancing security in the area, andrequested the public to complain to the nearest army camp if they received extortion threats.

More recently, in November 2012, following the police and army breaking up a gathering of students who were protesting against the military entering the premises of Jaffna University and the men’s and women’s hostels and assaulting students – the Vice Chancellor (VC) of the University met with the Jaffna Commander to request the withdrawal of the army from the vicinity of the premises. Although it was claimed that the army was called in to assist the police, it was the army commander who made the decision regarding withdrawal rather than the police. The MOD site further reported that ‘SF-J Commander requested the VC not to allow any outsiders other than undergraduates and academic and non-academic staff onto the University premises without prior permission either from the VC or the Registrar, to which all agreed’.

Mirroring this, in the south of the country, following the riots at the Welikada prison in the outskirts of Colombo in November 2012, the Commissioner-General of Prisons urged the Ministry of Defence to take over the administration of the prisons. Since 2009, the public and diplomatic services too have seen an influx of former military officers appointed to key positions. The Governors of the Northern and Eastern Provinces are both former military personnel, as is the Government Agent of Trincomalee.

Charity and gratitude vs. rights and dignity
The army’s encroachment into civilian space to exercise further control over the population, particularly children and youth, is illustrated by its involvement in the education sector in the North by engaging in philanthropic initiatives, with theMOD website replete with stories about the army’s activities which range from providing scholarships and distributing books to students. More recently, visitors to Kilinochchi and Mullaitivu are told that the Civil Security Department (CSD) is managing pre-schools in the area. While this is supposed to constitute paying the salaries of teachers and monitoring the administration of the school, it will no doubt also involve decision-making regarding curriculum and activities held at the school.

Further, reportedly, 103 military personnel are teaching the Sinhala language in schools in Kilinochchi.

As Enloe states, “militarization does not just happen: it requires decisions, many decisions, decisions made by both civilians and people in uniform”. Likewise, in Sri Lanka, the fact that private citizens and corporate entities provide donations to the aforementioned army’s welfare programmes rather than working with local community and social service groups illustrates the entrenchment and normalisation of militarization.
A disturbing aspect of the army’s philanthropic initiatives is the indication that they appear to view these as part of a charitable impulse dedicated to a population which in turn is expected to show servility and gratitude. This is demonstrated by phrases – such as, ‘grateful beneficiaries’, ‘charitable deed’ ‘this act of benevolence by the security forces have (sic) brought great joy to the children’ – used by both military officials and the MOD in speaking or writing about these activities.

In many instances the normalisation of militarization is aided by the dire economic circumstances of the conflict affected people, who due to lack of other livelihood opportunities take up employment with different sectors of the military machinery, such as the CSD which recently employed a large number of persons in Kilinochchi in agricultural farms which ironically were previously managed by the LTTE. It should be noted that instead of providing viable livelihood options to the conflict affected, the states appears to be offering opportunities mainly in the defence industry to those living in the former LTTE controlled areas.
The capturing of civilian space is supported by the ever-growing number of entities that are part of the defence complex, such as the Media Centre for National Security (MCNS), the Civil Security Department (CSD) and the Civil Defence Force (CDF). This structure is bolstered by the more public and even interventionist role played by military officials in a manner unseen in the past, such as military commanders making public statements on a number of issuesranging from the laws under which civilians will be prosecuted for certain offences to the behaviour expected of students of Jaffna University.

Militarization also appears to be an important component of the government’s post-war reconciliation strategy. This process seeks to reconcile with the Tamil community and include them in the social fabric of Sri Lanka through the re-militarization of the northern population. Cadet corps are being established in schools, leadership training programmes for school students are held with the involvement of the army, school tours are organised by the army, youth are encouraged to join the CDF, and women are recruited into the army.
While there have been a number of allegations made in relation to these recruitment campaigns, including forced recruitment and sexual violence against women recruits, which have been denied by the state, the main question to ask is if it is possible to secure the dignity, rights and physical and socio-economic well-being of the conflict-affected population by incorporating them into a military juggernaut that is encroaching and dominating all spheres of life in Sri Lanka, while demanding the servility and unquestioning loyalty of all?

The main concern is that there is little understanding amongst the general population of the dangers of military encroachment into civilian affairs. Instead, a culture and narrative in which the army is being firmly placed as an integral actor in all aspects of governance in Sri Lanka is being created. For instance, in an article that appeared in the Sunday Leader on 3 March 2013, an army officer responded to allegations of military interference in civilian affairs by declaring that, “these are baseless accusations made by certain parties who want the people to be distant from the forces as they do not want harmony”. Any challenges to this narrative would be considered anti-national and traitorous.
COURTESY:Opendemocracy.net/DBS