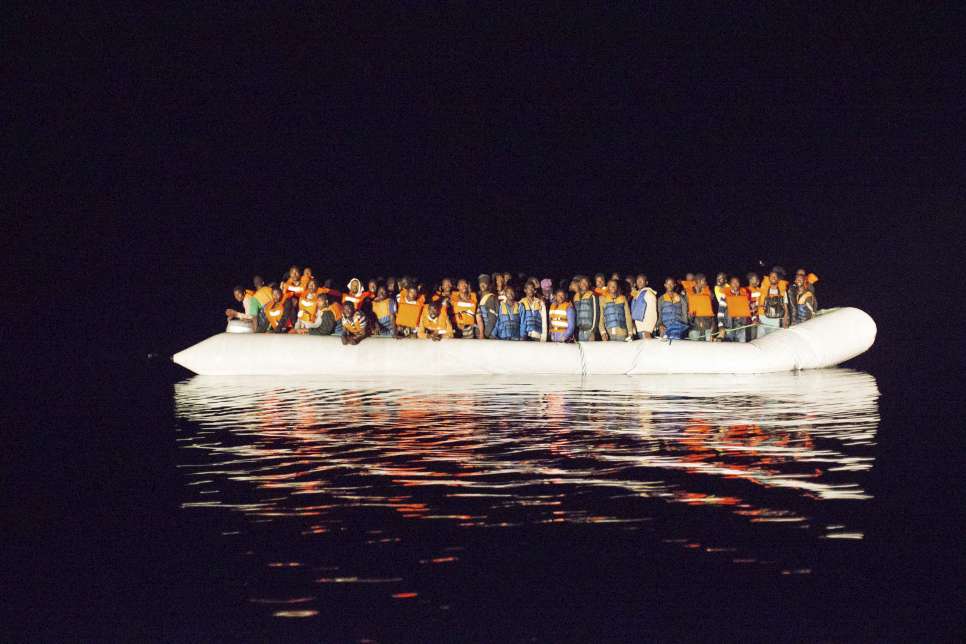 (A boat filled with refugees and migrants crossing the Mediterranean floats off the coast of Italy.   © Italian Navy/Masimo Sestini)

By: Adrian Edwards in Geneva and Medea Savary in Italy.

GENEVA, May 31 (UNHCR) – At least 880 people are believed to have drowned last week in a spate of shipwrecks and boat capsizings on the Mediterranean, the UN Refugee Agency said today.

“For so many deaths to have occurred just in a matter of days and months is shocking and shows just how truly perilous these journeys are,” said UN High Commissioner for Refugees Filippo Grandi.

UNHCR told a press briefing in Geneva that the latest figures were arrived at following new information received through interviews with survivors brought ashore in Italy.

“As well as three shipwrecks that were known to us as of Sunday, we have received information from people who landed in Augusta over the weekend that 47 people were missing after a raft carrying 125 people from Libya deflated,” UNHCR spokesperson William Spindler detailed.

He added that eight others were reported separately to have been lost overboard from another boat, and four deaths were reported after fire on board another.

He said that on a Mediterranean-wide basis, the odds of dying on the crossing are as high as one in 81 and getting worse. This highlights the importance of rescue operations as part of the response to the movement of refugees and migrants in the Mediterranean, and the need for real, safer alternatives for people needing international protection.

UNHCR figures also show that so far this year, 203,981 people have made the journey to seek safety in Europe. Almost three-quarters of these had travelled from Turkey to Greece prior to the end of March. Some 46,714 of these travelled to Italy, almost the same as the total recorded there in the first five months of 2015, 47,463.

“The North Africa-Italy route is dramatically more dangerous: 2,119 of the deaths reported so far this year are among people making this journey, making for odds of dying as high as one in 23,” explained Spindler.

UNHCR repeated its call for more action to be taken to tackle people smugglers.

“On the one hand there needs to be better focus on how the people smugglers behind this can be more effectively tackled, but on the other it’s still absolutely vital that serious attention is paid to the need for safe, regular alternatives so we don’t see loss of life continuing like this year after year,” Grandi added.

UNHCR said it was working to better understand the possible reasons and dynamics behind the latest movements. The majority of boats departing Libya are at present reported to be leaving from the Sabratah area to the west of Tripoli.

“As in the past they remain more crowded than those that have normally been seen on the Turkey-Greece route, often carrying 600 or more passengers, and sometimes being towed by larger fishing boats which in turn puts them at risk,” Spindler added.

According to some, as yet unconfirmed, accounts the recent increase in numbers is linked to efforts by smugglers to maximize income before the start of the holy month of Ramadan, in the coming week.

According to survivors, smuggler hubs operating in locations including Niger remain active in feeding people from West Africa through to Libya, where many remain for months before being put onto boats for the crossing to Europe.

Reports of trauma from sexual and other forms of gender-based violence among women making the journey – or being trafficked – appear common.

“Some women have told us they were subject to sexual slavery in Libya. We have also been seeing an increase in arrivals of unaccompanied children,” Spindler added.

Some of the first survivors mentioned departing from Subratha, Libya, aboard a big ship which was carrying more than 700 people on three levels. Among them were many women and children, a lot of whom stayed inside the hull of the ship.

When the passengers saw the rescuers approaching, they all moved to the same side of the boat and the sudden shift of weight caused the vessel to capsize abruptly. In the chaos that followed some swam for their lives but many remained trapped inside the ship.

“We have also been seeing an increase in arrivals of unaccompanied children.”

Hamin*, a man in his 30s, told UNHCR staff how he managed to rescue two people: “I am a good swimmer, I’ve always lived by the sea, so I am not afraid of water. I was swimming and all around me so many bodies. With my right arm I hugged a baby girl from Sudan, very young, probably only a six- or seven-month-old girl. And with my left arm I helped a Syrian lady. She was so scared, she didn’t know how to swim.”

They were then rescued by staff of the Italian navy ship Bettica and pulled aboard the vessel.

“I wanted to go back in the water, help other people but the Italian navy didn’t let me, they said it was too dangerous,” he continued.

Once safe on land at the Sicilian port of Porto Empedocle, those rescued smiled with relief. But many also knew they had lost dear friends or family members.
UNHCR