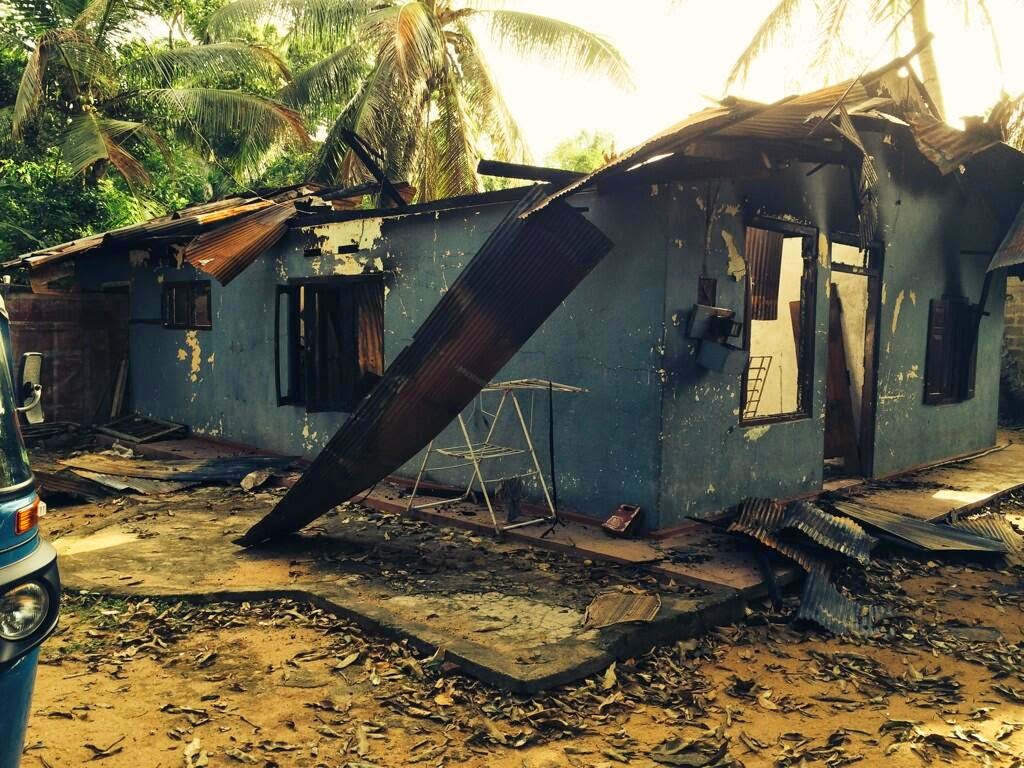 In yet another instance of a flagrant abuse of the judicial process, the medical and autopsy reports of three Muslim civilians killed at Welipitiya on June 15th 2014 have been fabricated to show that the victims were hacked to death instead of being killed by gunshots. This blatant cover up by the powers that be is aimed at shielding the actual perpetrators who are suspected to be personnel from the Police Special Task Force (STF).  When Bodu Bala Sena (BBS)instigated anti-Muslim violence broke out on a large scale in Aluthgama and Beruwela on Sunday June 15th 2014 ,one of the places affected badly was the ethnically mixed area of Welipitiya which is in close proximity to the Muslim enclave of Dharga nagar.
Though the Sinhala residents of Welipitiya were not involved in the attacks on their Muslim neighbours, armed gangs brought in from outside launched a savage onslaught in the name of Buddhism against the adherents of Islam in the area.
Unable to withstand the orchestrated attack , the Muslim families of Welipitiya fled en masse to the Mosque and adjacent “Madrassah”(religious school) in the vicinity seeking refuge. The “Sinhala Buddhist” mob chased them to the Mosque with the intention of invading it and attacking the Muslims inside and also destroy the place of worship.
When the mob besieged the Mosque with the intention of demolishing it and attacking occupants, the Muslim males were compelled to resist the marauders and safeguard their lives, families and the abode of Allah.The comparatively younger males encircled the Mosque in a defensive ring and began fighting off the mob while the elders, women and children remained inside. The Muslims fought with weapons like a few swords, knives, clubs and bottles. They also threw stones at the mob.
According to eyewitnesses the mobsters tried to break through the defensive cordon at least thrice but were beaten back after face to face fighting. Thereafter it was a kind of a “stand –off” situation where both sides confronted each other from a short distance without any direct physical fighting. Stones, petrol bombs and bottles were thrown at each other occasionally.Although the Police and Special Task Force were informed of the “face to face”confrontation at Welipitiya the security personnel did not arrive at the trouble spot for several hours. 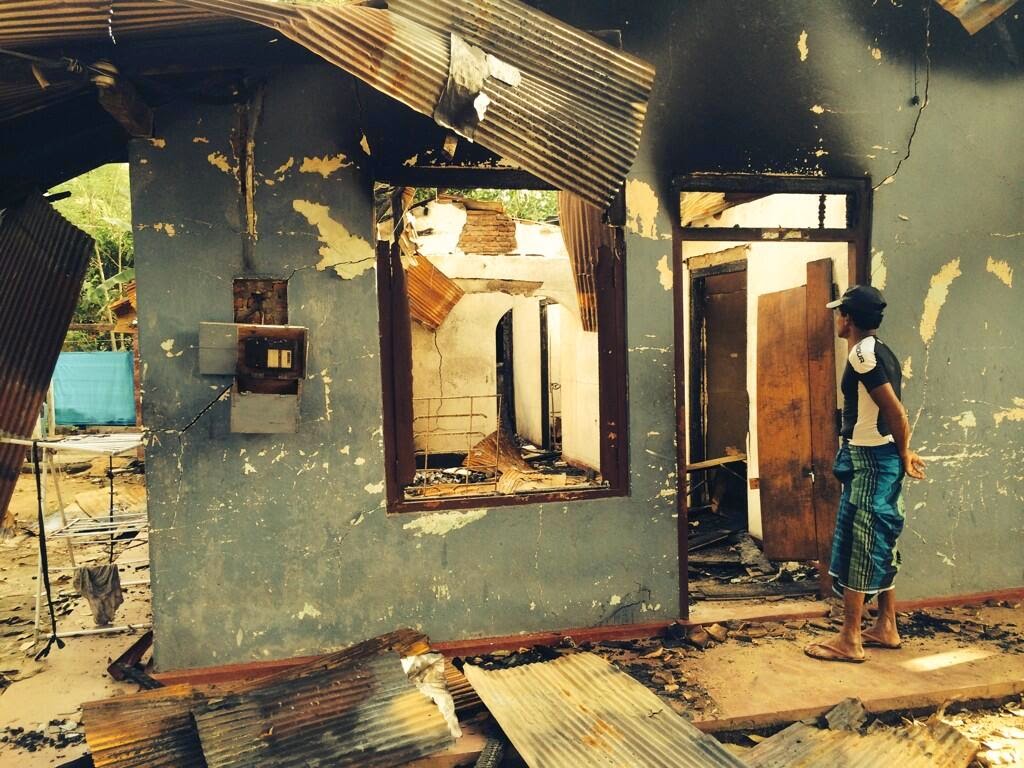 Welipitiya houses  burned (Camp4justice )
The Muslim defenders however underwent a terrible shock when a motor vehicle suddenly came from the opposite direction and slowed down. There was a hail of gunfire from the vehicle at the people and at the building. The electric wires were brought down by gunfire plunging the area into darkness.Bullets were sprayed on the walls too.The vehicle occupants were not visible. The assailants then drove up to the Sinhala mob, exchanged a few words and sped off.Since a curfew was in force at that time there was much speculation about the identities of the gun toting assailants.
Meanwhile there was panic and fear among the beleaguered Muslims. A number of people had been hit by the gunfire. The profusely bleeding injured were taken into the Madrassa and rendered available first aid. One segment of the defenders remained outside fearing an “invasion” but due to some unknwn reason the mob did not try to attack.
After frantic appeals the Police authorities finally appeared at the scene. Both groups were dispersed. Protection was given to the Mosque premises and the people inside. The injured persons were taken by the Police to the Kalutara base hospital in Nagoda.Around 18 were injured in the fighting of whom the condition of seven was regarded as serious. Two men died in Kalutara within hours of each other. A third died a day later.Subsequently the more seriously injured were taken to Colombo where the legs of two youths were amputated.
The threemen who died are 30-year-old Mohammed Shiraz, a labourer, 40-year-old Mohammed Sahuran, a local shop owner, and 41-year-old Mohammed Imran, a terrazzo and tile layer
Residents described to journalists how a bullet that killed one of the victims had pierced his heart and exited through the spine. A shot to the head had killed another. The third allegedly succumbed to wounds inflicted by a bullet that pierced his stomach or hip. Bullet holes and ricochets were visible on high walls, empty bullet casings lie on the roadside.
It was against this backdrop that the inquests and post-mortem examinations of the three dead Muslim civilians were conducted. In a shocking development the medical and autopsy reports stated that all three had been hacked to death and had died of knife stabbings and sword slashings. Not one word of the shooting or fatal wounds inflicted by gunfire! It appeared that the reports had been fabricated or tampered with by exerting pressure on the Judicial medical ooficials concerned.
When news of this gross distortion of the truth reached the battered victims of Welipitiya they were further shattered. It seemed obvious that they would get no justice under this regime although the Justice minister himself was the leader of Sri Lanka’s premier Muslim party.
While attempts are going on at one level to portray the planned anti-Muslim violence in Aluthgama as a spontaneous communal riot where both communities had participated equally, on another level a different attempt is being made to cover up the fact that “unknown”persons had fired guns at the beleaguered Muslim civilians. It is suspected that the obfuscation of facts is designed to cover up the covert role of some “defence personnel” in the anti_Muslim violence.
Speculation is rife that the suspected defence personnel who fired upon Muslims at Welipitiya were “rogue elements” from the Police Special Task Force(STF). it is felt that ”News” of the gunfire incident is being deliberately suppressed to avoid any suspicion falling on the STF defence personnel suspected of being involved. Hence the cause of deaths is being distorted by fabrication of medical reports.
Sri Lanka Muslim Congress leader and Justice Minister Rauff Hakeem in a recent newspaper interview stated “Two persons who were shot at died at Welipitya, but the inquest and postmortem are ridiculous. I can produce evidence of used bullets where the two were injured. I went to the spot. The bullets weren’t fired by civilians. However the autopsy report has indicated that the deaths were due to serious cut injuries. That is a preposterous situation if medical reports are being fabricated”
Former UPFA cabinet minister and current UNP Parliamentarian Mangala Samaraweera has also drawn attention to this aspect at a press conference.According to media reports Mangala Samaraweera claimed that the Police was under immense pressure from the Ministry of Defence to mislead the investigations, distort evidence and release suspects arrested in connection with the recent attacks.
“The Minister of Justice has stated that facts connected to the murders have been changed. He has stated that he can produce evidence of used bullets where the two were injured. The bullets weren’t fired by civilians,” Samaraweera pointed out. “But the Judicial medical reports say the deaths were due to cut injuries.”
Sri Lankans have in recent times mutely witnessed how the office of the Attorney-General has been devalued and how the judiciary has been undermined through the “Kangaroo court” impeachment of the De Jure Chief Justice.
Sri Lankans have observed silently how one person in a saffron robe is given “carte blanche” by the Police to instigate violence while another person in a “ran salu” who underwent violence is being promptly penalised by the khakied fraternity.
In such an environment the tampering or fabrication of medical and autopsy reports is simply a “sulu, sulu siddheen”incident of “seeni bola”proportions in the eyes of the powers that be