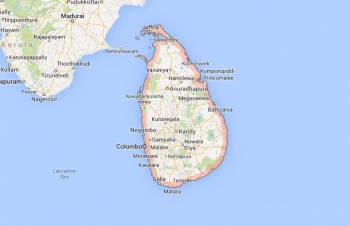 We recently interviewed Sri Lankan journalist Sanjana Hattotuwa from the organization Groundviews on the many questions surrounding press freedom in Sri Lanka. This week, one where Prime Minister Stephen Harper announced he would not be attending a major heads of government meeting in Sri Lanka, the group Tamils Against Genocide asked to contribute a piece to our website that laid out their conclusions on the situation for Sri Lankan journalists, and which journalists are the most vulnerable to violence and why.

This week Prime Minister Stephen Harper confirmed he will stay away from the Commonwealth Heads of Government (CHOGM) meeting in Sri Lanka, citing Canada’s deep concerns including “The absence of accountability for the serious violations of human rights and international humanitarian standards during and after the civil war” and a lack of freedom of expression among others.
Sri Lanka has gained a reputation as one of the most dangerous countries in the world for journalists alongside Afghanistan, Somalia, Eritrea and North Korea. By way of preview of a forthcoming Tamils Against Genocide (TAG) report on media violence in Sri Lanka, we’d like to share our perspective.
The silencing of dissenting media voices in Sri Lanka has a history, dating back decades. Since the current regime, the United People’s Freedom Alliance (UPFA), came into power in 2004, the relationship between state and media has deteriorated sharply.
Yet considering that much of Sri Lanka’s post-independence period has been entrenched in ethnic violence, the central question of race has been absent in the analysis of media attacks. Indeed, often ethnicities of attacked media workers remain unspecified in the reporting of human rights and news organisations. With the erosion of ethnic labels in the reporting of violence against media personnel, some core reasons for the Sri Lankan states repression of media personnel elude us.
Our analysis shows that some journalists are more vulnerable to state-backed attacks than others in Sri Lanka. A primary motive for attacks is to perpetuate the “absence of accountability” noted by the Canadian government.
Since 2004, Journalists for Democracy (JDS), an exiled group of Sri Lankan journalists from all ethno-religious backgrounds, reported 44 murders or disappearances of journalist and media personnel. As many media workers went missing during the final stages of the war in Mullivaikaal, Vanni Region, in 2009, JDS’s data remains incomplete to date. In corroboration with data on non-lethal violence against media personnel and interviews with Sri Lankan journalists, it however provides significant quantitative and qualitative indicators for the nature of violence inflicted upon the media.
Of all murdered or disappeared journalists listed by JDS since 2004, 37 are media workers of ethnic Tamil origin while 4 are ethnic Sinhalese and 2 Sri Lankan Muslims. Given that approximately 87 per cent of the victims of state repression against the media have been Tamil, one can speak of the appliance of ethnically discriminate violence by the state. Thus State repression of the media mirrors the state’s wider ethno-chauvinist policies. The rate of assassinations and/or abductions of Tamil media workers to that of non-Tamils is almost nine-to-one, yet the island’s Tamil population only makes up approximately 12 percent of the country’s inhabitants, according to Sri Lanka’s last census (2012).
Sri Lanka may be one of the most dangerous countries for journalists, but it is far from spatially evenly dangerous: of the lethal attacks and/or abductions of media personnel that happened since 2004, approximately 75 per cent have taken place in the majority Tamil-speaking regions of the island. Most of those occurred in the Mullaithivu (approximately 33 per cent) and Jaffna District (approximately 26 per cent) respectively.* Of the killings and/or abductions that occurred outside of the majority Tamil-speaking regions, the majority took place in the Colombo District (approximately14 per cent), which similarly has a significant, and for the region disproportionate, Tamil-speaking population. Tamil-dominated spaces thus emerge as the prime site of media crimes.
In brief, we find the threats to life amplify vastly if one is a media employee of Tamil origin working in a majority Tamil-speaking region of the country. Being critical of the government of Sri Lanka is less pertinent as a risk factor than being critical of the government’s conduct pre, during and post the conflict, with regards to the Tamil population. We contend that violence against the media contributes to the denial of justice for crimes committed against the Tamil population in Sri Lanka.
As a Tamil journalist reflected, for members of Tamil media organisations the stakes were always higher. Sinhalese journalists who openly advocate for Tamil rights and criticize the state with regards to its treatment of Tamils are, however, also vulnerable to state violence.
This ethnic dynamic has contributed as a significant block to the accountability that Prime Minister Harper speaks of in reference to the last phase of the 2009 war in the Tamil dominated North: indeed the war has been often described in the media with a cliché as a war without witness.
*JDS data analyzed number died/disappeared by region (percentage): 16 in Mullaithivu (33%), 13 in Jaffna (26%), 7 in Colombo (14%), 3 in Batticoloa (6%), 3 in Kilinoichchi (6%)1 in Trincomalee (2%), 1  in Mannar (2%), 1 in Vavuniya (2%), 1 in Anuradhapura (2.%), 1 in Kebithigollewa (2%), 1  in Matupula (2%).
Image credit: Google Maps
The Agenda
Share
Facebook
Twitter
WhatsApp
Pinterest
Email