Media: Now A Danger To Democracy 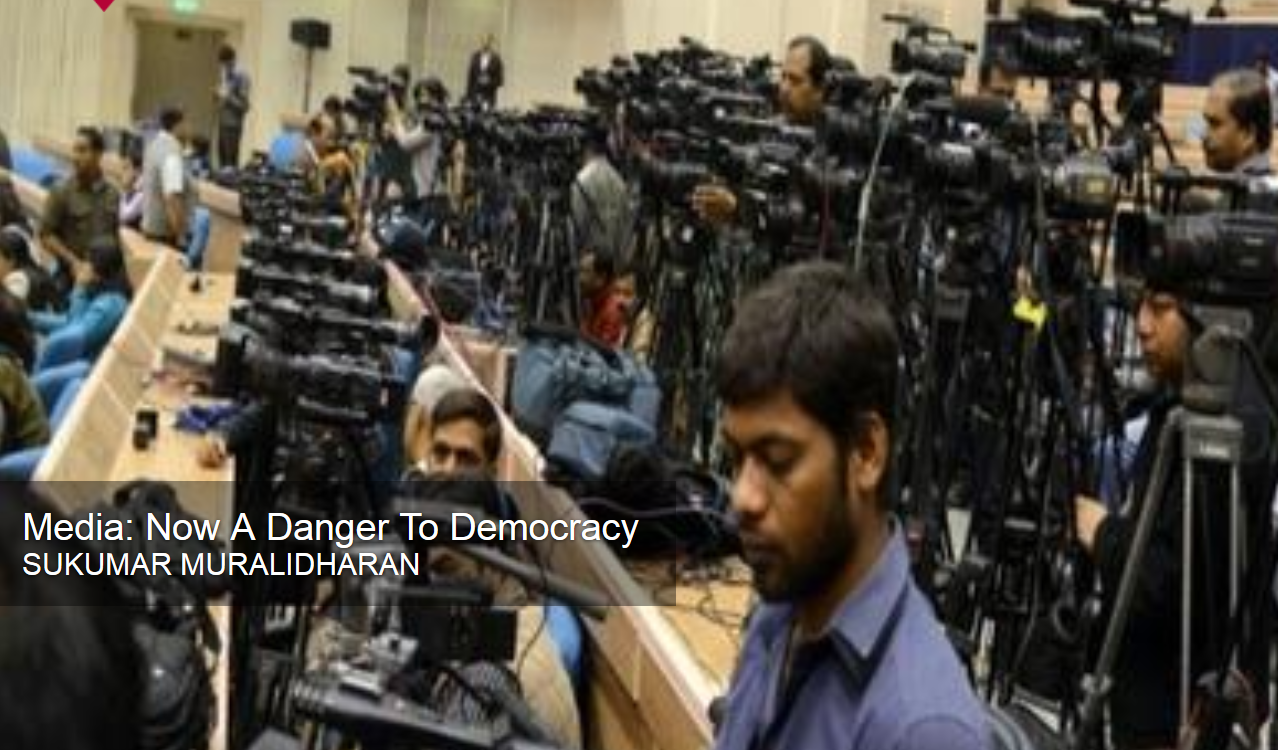 NEW DELHI: Since the September 18 attack on an Indian army post in the north Kashmir town of Uri, the media in this country has plunged into a mood of bellicosity, extreme even by its usual standards.

It was a matter of some convenience that in the near-religious fervour with which the “martyrdom” of eighteen Indian service personnel was observed, two months of strife in the Kashmir valley – that had been casually reported as treasonous, anti-national and dangerously fanatical – was quickly forgotten.

Immediately following Uri, the news website thequint.com reported that a retaliatory raid had been carried out by the Indian army, inflicting serious casualties on the Pakistan side of Kashmir’s Line of Control (LoC). A categorical denial was swiftly issued from army headquarters, after which other media outlets – resentful till then about missing a possible news break – jumped into the fray with unseemly delight. Far from any manner of effort to ascertain what really happened, they seemed to find greater joy in a competitor’s embarrassment.

The news website in the thick of it all was not about to back away from its fanciful reporting. It claimed to have carried out a further round of fact checks and determined it had been right all along.

Meanwhile, the National Investigation Agency (NIA) a specialised body dealing with terrorism cases, had found little corroboration for the story line that the media almost reflexively spun immediately after Uri.

Savage raiders coming into Indian territory invariably carry some identification marks that could be traced back to malevolent agencies from the enemy state in the west. That was unsurprisingly, the first account of the Uri incident that the media offered, following accustomed practice of not seeking evidence.

When the Indian Express reported that the NIA’s preliminary investigations had revealed no such evidence of overt involvement from the other side, army headquarters reacted in extreme anger, demanding a prior factual check over reporting involving its operations.

There has of course, been only one period when media reports were subject to prior restraint, and that was the ill-remembered emergency of the mid-1970s. Fortunately, this new power of censorship was not pursued any further, perhaps because the army really had no reason to worry. Except for the occasional flash of independence, the media has never been far from rolling over in abject submission to any agenda that is proclaimed to serve a putative national security interest.

On September 29, the Director-General of Military Operations in India’s army headquarters summoned a formal media briefing at which he announced that a cross-border operation had been carried out beginning the previous night and ending at daybreak, in which a number of terror “launch pads” had been destroyed and a significant number of enemy casualties inflicted.

A wave of euphoria swept over the media. Evening prime-time news broadcasts were suffused with greater than usual bluster. And just as the news channels were lending their full-throated support to street vigilante efforts to eject all Pakistan nationals from cultural activities in India, they were paying out good money to have certified hawks and retired military personnel from that country on prime-time shows, to be verbally savaged by bumptious anchors.

The news website thequint.com rushed into the fray with a detailed account of the operation headlined “Uri avenged”, which reported that attack helicopters had been used to take crack Indian army commandos across the border and evacuate them after the mission was completed.

The next day, The Times of India reported that the commandos had set off on foot, traversed a wide circuit within enemy territory, carried out their actions and safely returned to base by the break of day. But the factual details were seemingly superfluous, since the main theme of the day’s report was the newspaper’s magical clairvoyance in being the first to predict, immediately after Uri, that India was actively looking at retaliation options.

Meanwhile, the NDTV news website was celebrating the successful operation which had been carried out without the slightest scratch being suffered by the Indian soldiers. Other newspapers and websites reported minor injuries. The Hindustan Times reported that helicopters had been used to ferry the commandos while most others stuck to the story line of a trudge on foot into enemy territory and back.

Certain details involving the well-being of service personnel completely eluded the Indian media. On the day of the operation, the website of Karachi based Dawn reported that one Indian soldier had been captured. All Indian papers either ignored or vehemently denied that, before finally admitting in their print editions the following day, that he had “inadvertently” crossed the border and been taken captive.

This minor inconvenience was quickly forgotten, as the BJP began its triumphal procession through the news studios. Hoardings were soon springing up in town and village squares of poll bound Uttar Pradesh, boosting the Indian army achievement as a hammer blow against terrorism, and crudely appropriating the entire glory for the BJP’s national and local political leadership.

Pakistan for its part, was sticking to the story line that nothing of any consequence had occurred, beyond a minor flare-up in small arms fire across the LoC. A media party taken on an army conducted tour to various parts on that side of the LoC returned convinced, and for a brief while that story dominated the news cycle in Pakistan.

On October 6, despite the anxious efforts at damage control, Dawn came up with a story suggesting fresh sources of discord between the civilian leadership and army in Pakistan. Worried about the international isolation and odium that Pakistan was falling into, the political leadership had ostensibly demanded that the army rein in the various Islamic warrior groups it had nurtured. The army command was resisting this move, suggesting a fresh eruption of the civilian-military volatility that has plagued Pakistan’s state structure.

Army HQ in Pakistan and the Prime Minister’s office were quick with their denials. Dawn stuck to its story. On October 11, the reporter who had investigated and written the story, Cyril Almedia, was placed on a so-called “exit control list”, restraining him from travelling out of the country. Dawn responded with public statements of support for their reporter from the publisher, Hameed Haroon and editor, Zafar Abbas.

Basic freedoms on both sides were beginning to be threatened in the overwrought atmosphere of hostility towards the other, a public mood described by the former civil servant Gopalakrishna Gandhi in a rare interlude of media sanity, as “hate-riotism”.

If the spirited response of Dawn was something that freedom loving individuals from both sides took courage from, the media in India seemed happy to cooperate with the political design of fettering its ability to contribute to the public discourse.

On October 6, morning bulletins in the Delhi-based news channel NDTV gave brief excerpts from an interview it had recorded with former union minister P. Chidambaram. There was a promise that the entire interview would be broadcast in evening prime-time.

What NDTV actually served up at the promised hour was a full-screen, static announcement titled “India above politics”.

That theme kicked off its prime-time news broadcast as the newly minted editorial leitmotif: that “national security (could not) be compromised by politics”. Recognising that “the current political debate” threatened to do precisely that, NDTV had determined that it would “not air any remarks that risk security for political advantage”.

As reported by Siddharth Varadarajan on the news website thewire.in, this announcement followed a directive issued by NDTV editorial director Sonia Singh to all staff in an email that morning. The directive also included an explicit disavowal of any intent to “doubt or question” the Indian army or use it for “political gain”. Only this particular proviso was dropped, for reasons yet unexplained, from the prime-time declaration of editorial fealty to the new militarist spirit.

It was difficult to imagine that Chidambaram, who was appointed to his first important national security position in 1986 and had served ten years in the cabinet committee on security under Prime Minister Manmohan Singh, could contribute to any of the negative outcomes that NDTV feared. But in the mood of prickly patriotic fervour that the media is seeking actively to foster, even the most sober and informed voices seem to have no place.

An environment of information scarcity allows rumour and half-truths to flourish. Far from restraining competitive politics, it actively nourishes it, at the cost of any sense of responsibility to the public.

On October 9, The Hindu with an obvious assist from higher levels in the military command, revealed the various details of the first of these cross-border operations, carried out by the Indian army in retaliation for a strike exactly a month earlier by Pakistani forces.

Pakistan had allegedly carried out its sneak attack in the Kupwara area, pinning down a small Indian army contingent and inflicting a heavy cost in lives. Two Indian soldiers were beheaded and as reinforcements rushed in, the Pakistan men fled back to safety with their grisly trophies.

“Operation Ginger”, the Indian retaliation was planned for the day before Eid, when Pakistani personnel were expected to let down their guard. The early morning raid ended with India going one-up on Pakistan in the number of trophies harvested.

The Congress was soon strutting its stuff, claiming that this display of military machismo under its watch was proof of greater devotion to the nation. What was missing was any sense of public scrutiny over army actions on both sides, which amount by all applicable codes, to war crimes.

Early in 2013, when two Indian army personnel Lance Naiks Hemraj and Sudhakar Singh, were killed and their bodies mutilated in a cross-border incident, the Indian media went into a paroxysm of rage, stirring up a vile public mood for vengeance. External Affairs Minister Sushma Swaraj, then in opposition, called for three Pakistani heads to avenge the indignity to the Indian army.

The details of “Operation Ginger” as now revealed, speak of an action-reaction sequence of barbarities on the border, underway since well before this incident. Yet the public discourse seems unconcerned about the persistence of the conditions that make the young men of the Indian army accessories in such patent violations of basic decency.

In a political milieu that values the principle of civilian control over the armed forces, the responsibility for every such incident is ultimately the political leadership’s. The mood of unquestioning obeisance to the army is an opportunistic evasion of this principle.

A media that casually calls for pressing ahead with this cycle of vengeance and uses the most violent vocabulary in daily discourse is a danger to democracy. One that calls the nation to war without the slightest comprehension of wider realities, is an accessory of the worst totalitarianism.