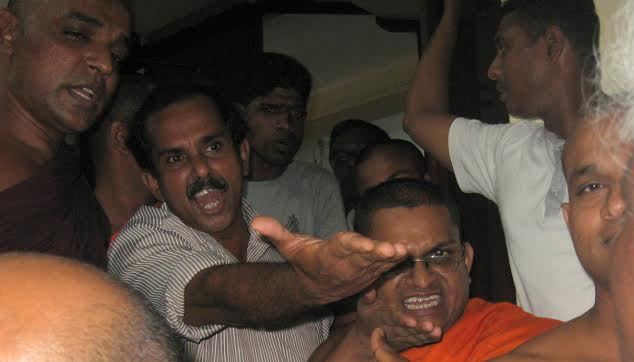 The External Affairs Ministry (MEA) of the Government of Sri Lanka today (05 Aug 2014) issued a statement indirectly justifying the monks led mob which invaded Centre for Society and Religion (CSR) in Colombo and disrupted a meeting of the families of the disappeared.

The statement is full of outright lies, an organiser of the CSR event told Sri Lanka Brief.

The External Affairs Ministry statement  now says that the monks led mob was ”another NGO, “Parents’ Collective of Disappeared Persons”, which had sought access to the meeting, demanding that their grievances be heard too. ”

”This statement justifies the mob behaviour, their illegal entry and chaos they made; The mob did not have any right to forcibly enter to private meeting and if they wanted they should have organised their own event” he further told.

The statement does not say a word on the  illegal entry of the monks led mob in to the CSR and unruly, violent behaviour o f the mob. Instead it says that ” An ensuing argument had led to a tense situation which had subsequently been brought under control by law enforcement authorities.”

It put the blame of disturbances on both sides.

The so-called law enforcement authorities, i.e., police did not control the mob. It was the organisers of the meeting who forced the invaders to retreat, according to the eye witness to the event.

Instead of upholding rule of law in the country and condemning the monks led mob the External Affairs Ministry place the blame for the mob violence in the diplomatic missions. it says ” a certain section of the diplomatic corps appears to be involved in a manner lacking in objectivity, in events organized for a particular region and community. This has led to the emergence of a pattern of such potentially volatile situations giving rise to the perpetuation of mistrust amongst communities at a sensitive juncture in the country’s history. ”

In fact the statement of the MEA  sets a dangerous precedent that any pro government mob will be allowed to disrupt any civil society event in the future, Sri Lankan human rights activist told Sri Lanka Brief.