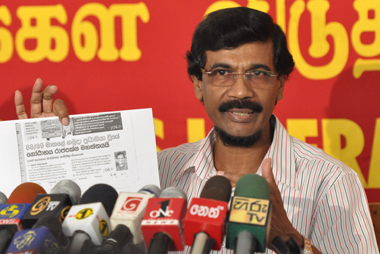 Speaking at a special media conference held at the head office of the JVP at Pelawatta today (1st) Mr. Tilvin Silva said, “After Matale mass grave was first detected in November last year an investigation report was released on 17th March.  The judiciary and medical reports revealed that the skeletal remains found in the grave belonged to 86 – 89 period. Any doubt regarding the period the remains belonged to has been solved. The Magistrates Court has definitely stated the skeletal remains belonged to those who died during the 86 – 89 period.

We all know that there was a huge suppression during the 88 – 89 period. What has been unearthed is the outcome of that suppression. The government is following a very silent policy regarding this. The government attempted to sweep the whole episode under the carpet. The unearthing of the mass grave was an accident. It came to light when the ground was being prepared to construct a building for Matale Hospital. The government attempted to stop excavations and hush up the incident. However, excavations had to be continued due to a court order. We held a media conference and demanded that an investigation was necessary.

Matale grave is the largest mass grave found in the country. Excavations unearthed 154 skeletons and 81 skulls. Investigations revealed that the owners of the remains had been subjected to cruel, inhuman torture. Pieces of wire, cables and plastics have been found from the grave. Investigations also revealed that skulls had been cut with tools such as saws, the heads had been severed from bodies and limbs had been broken. Despite finding 154 skeletons, only 81 skulls were found. This indicates that some were murdered by severing the head. We all know that human heads were on display on roads during this period.

If all these 154 persons had been murdered, it is a very serious matter. However, the government doesn’t take any action regarding this. The government likes to bury the whole episode. The government is worried regarding finding the mass grave. This government under Chandrika Bandaranayake shed crocodile tears regarding those killed during 88 – 89 period to get votes of their families. They excavated graves; formed mothers’ associations; went on demonstrations. Mr. Mahinda Rajapaksa, who was a Parliamentarian then complained to the Human Rights Commission. It was carried out against the UNP government to topple it and come to power.

Those who were murdered were patriots who loved this country. They fought against Indian invasion. The government that shed crocodile tears to come to power is following a silent policy now. The perpetrators should be punished.  The UNP was in power at that time. However, the politicians who were in charge of that area are in the present government now. This is why the government doesn’t want to carry out further investigations regarding the matter. For, the UNP too is supporting the government at present. As such, the government is being grateful to the UNP. Most of the members of the UNP during that period are in the government now.

The District Coordinating officer in charge of the Army during this period was Gotabhaya Rajapaksa. This was said by the Deputy Minister of the government Nandimithra Ekanayake.  Also, C.A. Chandraprema, who wrote ‘Gota’s War’, had clearly stated that Gotabhaya Rajapaksa was called to Matale in 1989 and the Army there was placed under him. It also states special operations were carried out in the area and officers Shavendra Silva and Jagath Dias served in Matale during this period. They should be responsible regarding the incident.

There should be a special investigation regarding these murders. We would pressurize the government in various ways until such investigation is carried out. On several occasions we demanded the government to reveal to the country the period the murders took place and how they were murdered. Now medical reports have reveled they belong to the 86 – 89 period and they were tortured before they were murdered. As such, the government should commence a special judiciary process. The UNP leaders of that period, the district secretaries, Grama sevakas and other administrative officials that served the area, officers in charge of security and the people from Matale should be invited to give evidence and help in the investigation. We would continue to pressurize the government until this process is begun.

We also will commence a special programme to collect details of those who disappeared during this period. We ask the people in Matale to give us all the details they know regarding this. During the past people like Dulles and Dilan spoke about those who disappeared and they shed tears. However, they have become completely silent now. They are like deaf, dumb and blind now. Those who sold the dead to come to power should have the courtesy to utter a word on behalf of them. I would like to make a special thanks to the mass media. The government could not sweep the matter under the carpet due to the vigilant of the media.”

The Member of the Central Committee of the JVP Nalinda Jayatissa too was present.
LT