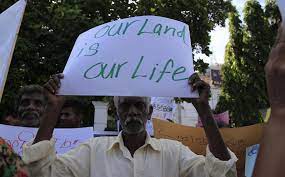 A legal amendment that allows rural families to mortgage grant lands without State oversight will lead to mass-scale dispossession, with properties everywhere being seized by financial institutions when their impoverished owners are unable to pay their dues, community organisations have overwhelmingly warned.

The Land Development Ordinance (LDO) (Amendment) Bill got through the second reading in Parliament on March 11. Among other things, it enables the holder of land received through a State grant to mortgage it without the respective Divisional Secretary’s approval.

In a statement this week, 32 trade unions and community groups slammed the bill saying the “ignorance and indifference” of MPs regarding farmers’ indebtedness was “outrageous”.

State lands are handed out on permits or grants. Permit lands cannot be mortgaged or alienated. And the proposed amendment does not change that.

However, under the principal enactment, holders of lands distributed as grants can “dispose of such holding” on the prior approval of the Government Agent (it does not define what “dispose of” means). The LDO Amendment, which will be taken up again in Parliament on Wednesday, removes that condition insofar as mortgaging goes. There is no reference to selling or gifting.

Many MPs “seem to believe that enabling farmers to mortgage their land to banks is a one-stop solution to all farmer problems”, the statement warned. The amendment is “misrepresented” as a progressive step that gives people more autonomy and control over their land (the bill also introduced the right of women to inherit these lands).

“However, thousands of farmers who have lost their land to banks, finance companies and local ‘mudalalis’ know that the freedom to mortgage land has nothing to do with free will or liberation,” the statement maintains. “Farmers mortgage their lands and consequently lose their lands out of sheer desperation.”

Critics of the amendment hail from around the country. Rural families have been pummelled by crisis after crisis–nutrition, fertiliser, health, environment, economic, issues relating to land division–and are heavily indebted, they say.

Thousands of families, such as those in Mahaweli resettlement areas, received grant lands. Many have taken multiple loans from microfinance companies and cannot settle the capital or interest. Some have already handed over their land permits and grant certificates to loan sharks in exchange for high-priced informal credit, outside of the legal framework. Removing the one requirement that regulates how they mortgage their properties will further expose them to predatory institutions.

“People have no money,” said Vimukthi de Silva, Provincial Coordinator for the Movement for Land and Agricultural Research (MONLAR), which works across the North-Central Province. “Farmer’s costs are bigger than their earnings.”

“When they know their lands can be mortgaged, they are helpless enough to give them up to anyone for a lump sum,” she explained. “They will think, ‘I am sick, I can’t teach the kids, I have no money,’ and hand over their documents. The outcome is that they will lose their lands. I can confidently tell you that, in the present circumstances, none of them will be in a position to redeem their lands.”

The properties will go into the hands of financial institutions that will sell them to investors, many of whom are already clamouring for land, Ms de Silva predicted. Microfinance companies that were hitherto prevented from taking land as collateral or repayment for unpaid loans will pressurise grant-holders to mortgage their properties to settle debt.

“If this bill goes through, landholders, many of whom are war-affected widows, will lose the only asset they have left,” said Vavuniya-based Kalavathie Sinniah from the Women’s Action Network.

The majority of properties in Jaffna are privately-owned but elsewhere in the North, families subsist on grant or permit lands. If these are lost, they will also have no means of earning a living. They are also heavily indebted to microfinance companies and loan sharks.

When there was Government oversight, people were bound to their lands and also fearful they would be taken back if due process was not followed. In future, there will be no legal impediment even to microfinance companies browbeating or convincing them into mortgages.

“Once they start losing their lands, people won’t know whom to turn to,” Ms Sinniah said. “Women, in particular, will be badly affected. It will leave our community destitute. It will be the second destruction to hit us since the war. And it will also affect people all over the country who are vulnerable because of economic hardships.”