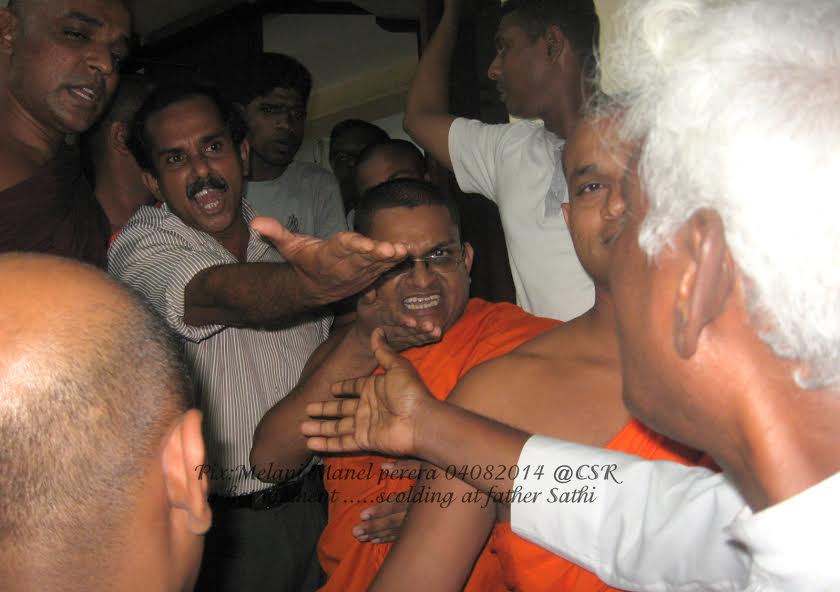 The Conference of (Catholic) Major Religious Superiors (CMRS) of Sri Lanka strongly condemns the illegal intrusion of the Centre for Society & Religion (CSR), in Colombo, on 4th August 2014, and disruption of a meeting of families of disappeared persons. CSR is an institution run by Oblates of Mary Immaculate (OMI), a Catholic religious congregation that is also part of the CMRS. The CSR is situated in the premises of a Catholic Church in Colombo.

We appreciate the efforts of the organizers to invite families of disappeared persons from North to Colombo. We are challenged and inspired by the love, courage and perseverance of families of disappeared persons, particularly women. They have braved much pain, intimidation, threats and numerous other hardships, but still do not give up their search for truth and justice. We are humbled by their willingness to share their experiences and struggles with us. That is why members of the Justice, Peace & Integrity Commission of the CMRS (CMRS-JPIC) also joined the meeting on 4th August, along with other invited religious clergy, lawyers, civil society representatives and diplomats.

We also commend CSR for opening its doors to such initiatives, when many other venues are closing their doors, fearing the kind of incidents that happened on 4th August at CSR. We recognize that this is a continuation of CSR’s history of having welcomed and supported Sinhalese – Buddhist families of disappeared persons, and people of all ethnic and religious who have been subjected to injustices for more than 4 decades.

The mob that included Buddhist Monks was clearly trespassing private property of the Catholic Church, and CSR. They invaded a private meeting. These are all criminal acts. We are saddened that the large Police contingent that arrived asked the meeting to be shut down, participants to be sent home and organizers to come to the Police station, instead of dealing firmly with the invading mob. What was even more alarming was the refusal of the Police to provide protection to the meeting, the venue and in particular, participants.

Like the Police, the Ministry of External Affairs had also tried to shift the blame onto organizers and participants, implying that they are also to be blamed for “tensions,” instead of condemning the mob that illegally invaded a Church premises, a church run institution and a legitimate private meeting. We appreciate the efforts of the diplomatic community to listen to Sri Lankan families of disappeared and stand in solidarity with them, and regret that the Ministry of External Affairs has painted this in a negative light.

All present at the meeting witnessed for themselves how the mob’s actions had terrorized the families of disappeared, including children. They also saw and heard the abusive language used by the mob, the false accusations and threats made against organizers and participants. Members of the mob took photographs and videos in the presence of the Police, further scaring families of disappeared persons and children.

We are also alarmed to have learnt that threats, intimidations, surveillance and false accusations against families of disappeared, organizers and other participants who came to listen to them, had begun even before the meeting and continues afterwards. Church run institutions who were to host families of disappeared persons have been visited and employees questioned by Police before and after the incident at CSR. Several family members of disappeared had got intimidatory phone calls before they came to Colombo.

We earnestly appeal to the law enforcement authorities that the rights of every citizen of this country to hold peaceful meetings and the freedom of speech be respected and honoured, irrespective of creed or ethnicity.