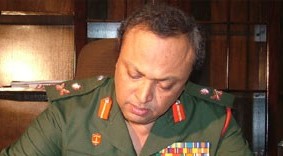 Major General (Retd.) Nanda Mallawarachchi has been appointed as the Director-General of the Department of Multi-Purpose Development Task Force, effective 8 January.

The aim of this programme is to provide State sector permanent employment to most suitable candidates, who are unskilled individuals without any formal education or of the lower level of education, after giving them proper vocational training, says Presidential Media Unit. It further says that this Multi-Purpose Development Task Force was established with the objective of creating a poverty-free Sri Lanka as envisaged in President Gotabaya Rajapaksa’s policy statement of “Saubhagyaye Dekma”.

Discussing the militarisation under Gotabhaya rule,  Dr. Ameer says that “Ali Supremacists’ relentless attack on the minorities cannot go on forever without provoking retaliation. It appears that even after a 30-year civil war and last year’s Easter massacre of colossal magnitude, both costing the country incalculable losses, these supremacists have not learnt their lessons. This may be the reason why GR has strengthened the security forces and its intelligence branch, through purge, promotions and recruitment. The decision to employ 100,000 young men and women from poor families [to the Multi-Purpose Development Task Force ]also appears to have a military tinge.”

A number of political commentators have drawn parallels between this force and infamous ” Brown Shirts” of Hitler.

Major General (Retd.) Nanda Mallawarachchi retired from Sri Lanka Army in 2007 as Acting Commandant of the Army and he also served as the former Ambassador to Indonesia.