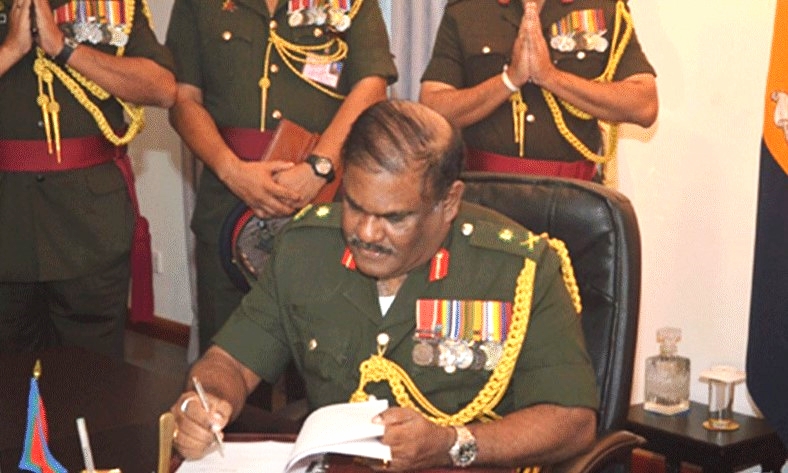 Here is the news story in full:

Our sources said that senior Police officials in charge of the Western Province had on several occasions informed the SLPP supporters who had gathered in front of the Temple Trees in support of former Prime Minister Mahinda Rajapaksa and those who had organised the supporters, not to enter the Galle Face Green.

The Police officials had informed the SLPP supporters, and certain Ministers and MPs who had organised the former group, that there would be a great commotion in the country if they came to the Galle Face Green and clashed with the “GotaGoGama” protesters.

In addition, two riot control trucks had been prepared to prevent the SLPP supporters from entering the Galle Face Green, where nearly 200 police officers had also been deployed around the Galle Face area by noon yesterday.

However, sources said that IGP Wickramaratne, on instructions from Public Security Ministry Secretary Maj. Gen. (Retd.) Alwis had instructed senior Police officials, including SSP – Colombo Central Chandrasekara, to not use water cannons and tear gas to disperse the SLPP supporters and prevent them from entering the Galle Face Green.

According to sources, the IGP had instructed them to refrain from doing such, stating that they were supporters of Rajapaksa. However, they also claimed that on the further instructions of President Gotabaya Rajapaksa, the Police later used tear gas and water cannons to control the situation at the Galle Face Green.

When inquired about this, Alwis denied the allegation, saying that he had not given such an instruction to the IGP. When contacted by The Morning yesterday, he said: “We did not want this to happen from the beginning. We did not want the people to get to the Galle Face Green. The Police were asked to stop them from going there, and they were trying to do that. However, the people started running all over the place. We were worried about this happening.”

When queried as to why the Police did not use water cannons and tear gas in between the Galle Face Green and the Temple Trees to prevent the SLPP supporters from entering the area, he said that the Galle Face Green was identified as the best place to stop them. He also said that it was the Police that should have taken a tactical decision regarding the location at which the said group of SLPP supporters should have been stopped.

More than 100 people were admitted to the National Hospital in Colombo yesterday, following the tense situation that erupted near the Temple Trees and spread out to the Galle Face Green protest site.

A group of SLPP supporters, who had come to meet with Mahinda Rajapaksa yesterday morning, attacked the “MynaGoGama” and “GotaGoGama” anti-Rajapaksa and anti-Government protest sites set up in front of the Temple Trees and the Galle Face Green, respectively. They were seen assaulting the peaceful protesters at the sites while destroying the tents and other makeshift constructions that had been set up at the protest sites.

Amidst this, Mahinda Rajapaksa, whom the SLPP supporters who had gathered at the Temple Trees yesterday requested not to resign, had handed over his letter of resignation to President Rajapaksa yesterday evening.