[Maithripala and CBK at the press conference today]
In an interesting turn of events in Sri Lanka’s politics, former Minister and General Secretary of President Rajapaksa’s ruling coalition, Maithripala Sirisena has been named on Friday as the common opposition candidate to contest Rajapaksa at the upcoming snap presidential poll.

Addressing a press conference on Friday at the new Town Hall in Colombo, Maithripala Sirisena emotionally thanked all the opposition parties for nominating him as the common candidate.

“I am thankful to all the political parties, including the UNP, for nominating me as the common opposition candidate. Please cast all your votes for me to save this country from disaster. I pledge here that I will abolish the system of executive presidency within 100 days, if I am elected as the next president,” he told reporters. 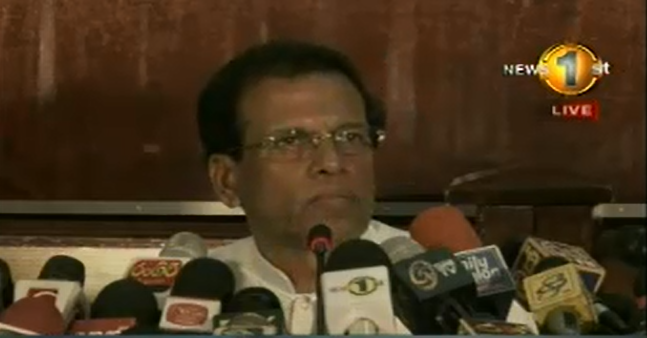 But the coalition of opposition has finally decided to nominate Maithripala Srisena, who just quit his health ministry portfolio and all other government positions, aiming to harvest the grassroots of the Sri Lanka Freedom Party (SLFP), which is the major partner of the ruling coalition.

Having joined the SLFP in 1979 at the age of 29, Sirisena first entered the parliament in 1989 and went on to become a cabinet minister. In October 2008, he escaped unhurt a suicide bomb attack in the outskirts of Colombo by the Tamil Tiger rebels, who were militarily defeated in May 2009.

The UNP, Janatha Vimuthi Peramuna (JVP), which is the third largest Sinhala political party, the major Buddhist Monk party Jathika Hela Urumaya (JHU), the Democratic Party (DP) of former Army chief Sarath Fonseka and Democratic People’s Front (DPF) have all given their written consent to give their support to Maithripala Sirisena to race against President Rajapaksa.

The ruling coalition is facing a major revolt if not defection, with over 20 other SLFPers, including several senior cabinet ministers and deputy ministers reportedly deciding to quit the party and work with the opposition to defeat President Rajapaksa at the poll.

As we reported yesterday, General Secretary of the Sri Lanka Freedom Party (SLFP), the major party of the ruling coalition, Minister Maithripala Sirisena earlier this week had declined to accept the premiership offer made by President Rajapaksa.

Former President Chandrika Kumaratunga has been working hard in brining all these opposition parties under one umbrella to make what the oppositions called “a necessary regime change”.

The state intelligence service has already warned the President that any move Mithripala takes either to work against or to refrain from the electoral activities would undermine the already waning popularity of the government at the grassroots level.

Since becoming the President in November 2005, President Rajapaksa has visibly sidelined the old guards of the SLFP and has been giving prominence to the family members and crossed-over members from the UNP and the JVP. This has resulted in causing resentment among the SLFP stalwarts, who have virtually been pushed to take a backseat in the day-to-day running of the government.

Although the next presidential poll is due in November 2016, President Rajapaksa, who is on his second term in office, has controversially amended the constitution in such a manner that it would enable him to contest the poll more than two times.
Colombo Mirror