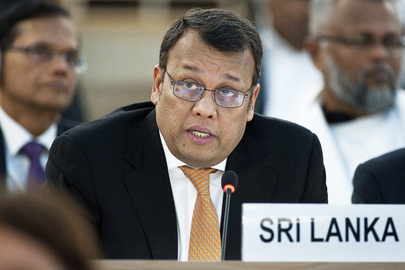 The Sunday Times Political Editor
Last week When the cabinet meeting was over President Rajapaksa beckoned to External Affairs Minister Peiris and Plantation Industries Minister Mahinda Samarasinghe to meet him before leaving ‘Temple Trees’. Samarasinghe is also the President’s Special Envoy for Human Rights. After the cabinet meeting, the two ministers were ushered into an area where President Rajapaksa was already seated. “I want you to go to Geneva,” the President told Samarasinghe.

After a conversation that went on for nearly twenty minutes, asked to join in were External Affairs Ministry Secretary Karunatilleke Amunugama and Ravinatha Aryasinha, Sri Lanka’s Ambassador to the UN in Geneva. The discussion continued.

Though Samarasinghe is President’s Special Envoy on Human Rights, the EAM has not kept him informed until last Thursday on any developments related to the UN Human Rights Council. Besides the Council sessions beginning tomorrow, this issue has a number of matters to be dealt with.

One was a letter written to Navi Pillai, UN High Commissioner for Human Rights, in response to a letter sent by her to the Government. Another was Sri Lanka’s response to Pillay’s report to the Council “on advice and technical assistance to the Government of Sri Lanka on promoting reconciliation and accountability in Sri Lanka.” Among others were the day-to-day briefings the EAM received from Geneva on matters related to the UNHRC. Minister Peiris had earlier won Presidential approval for Ambassador Aryasinha to head the Sri Lanka delegation and thus sidelined Samarasinghe. The friction between Peiris and Samarasinghe is well known and spilled over to the public domain in Geneva the last time round. Last Thursday, with just three days to go for the Council sessions, Samarasinghe was being told to pack his bags and fly to Geneva, thoroughly unprepared for the task ahead.

After the ministerial meeting and the one with President Rajapaksa, Samarasinghe flew to India. Though due back on Sunday, he hurriedly returned to Colombo on Friday to go through a ‘crash course’ to catch up on what the EAM kept away from him, before flying out to Geneva tomorrow night. He put off journalists by saying he was still abroad to pour over his brief and consult officials. He is due to speak at the UN Human Rights Council on Wednesday.

What led to the sudden change of heart after a decision to keep Sri Lanka’s representation at the official level? The opposition UNP had also provoked the Government by issuing a statement saying that Sri Lanka had already conceded defeat in Geneva. The move to have a low level delegation in Geneva, it turned out, had been on advice from Minister Peiris that if Ministers were to go, they would have to make formal commitments on behalf of the Government. The officials could easily say they would have to consult the Government in Colombo before giving any response. The change of heart at the last hour tells the story of how skewered the EAM thinking has become in the conduct of the country’s foreign policy.

The story behind the sudden change of heart reflects another chapter on how Sri Lanka’s foreign policy is conducted. After last year’s UN Human Rights Council sessions, Minister Samarasinghe made several public remarks. They related to the support he received and the challenges he faced. One in particular turned out to be a major faux pas. He announced during the early days that India would support the US backed (first) resolution. It was to cause a furore in Tamil Nadu where politicians protested to the Congress Government. A tape recording of Samarasinghe’s remarks to local radio stations also came in handy in their campaign. Some even made representations to Prime Minister Manmohan Singh. It was then a publicity campaign to project what Samarasinghe was doing.

It remains to be seen how different it would be this time. Aryasinha is learnt to have written to his EAM bosses pointing out that some of Samarasinghe’s comments did not go down well with country representatives in Geneva and he had to “take the flak.” Based on this, Peiris had canvassed to allow Aryasinha to handle matters without any ministers travelling to Geneva. That development prompted EAM Secretary Karunatilleke to insist there would be no ministers in Geneva this time. The EAM Secretary had also strongly backed the move for Aryasinha to lead the delegation.

However, Aryasinha’s efforts came a cropper for two different reasons, according to an EAM source familiar with matters related to the UN. Firstly, he had identified officials in the EAM, the Justice Ministry and the Defence Ministry who he picked to serve on the Sri Lanka delegation. The other was consultations he was locked in with Eileen Chamberlain Donahue,the US Ambassador to the UN in Geneva, to “water down” the resolution on Sri Lanka and thus avert a vote. The first effort failed when the Ministry of Defence did not release the official he sought. The second move, it transpired, was taking a different turn.

An early draft of the US-backed resolution had gone through a metamorphosis where the wording, far from being “watered down,” had hardened. Against this backdrop, Ambassador Aryasinha was summoned to Colombo. After the Cabinet meeting, when Rajapaksa met with the two ministers, the EAM Secretary and the Sri Lankan envoy were asked to join in the discussion. That is where Rajapaksa overturned his own earlier decision that was based on the recommendations of Peiris, and told Samarasinghe to fly out instead. After the Cabinet meeting, official Government Spokesperson Minister Keheliya Rambukwella was unaware of what had happened after the cabinet meeting in the ante room of ‘Temple Trees’. He told the regular media briefing no decision has yet been made on the composition of the Sri Lanka delegation to Geneva.

On Friday, the Plantation Industries Ministry lost no time in officially announcing that its Minister Mahinda Samarasinghe would lead the Sri Lanka delegation to Geneva. More in the form of a new media campaign in the coming weeks would now come from the Plantation Industries Ministry and not the EAM. Needless to say the local publicity wars would be more intense than the diplomatic wars that the Government has to fight on many international fronts.

Last week, the Sunday Times revealed exclusively in the front-page lead story the highlights of an early draft of the US-backed resolution. It called upon the Government to allow “unfettered access” to UN rapporteurs. Among them were mandate holders dealing with the independence of judges and lawyers; torture; human rights defenders; freedom of expression; freedom of association and assembly; extrajudicial, summary or arbitrary executions; and the Working Group on enforced or involuntary disappearances. Adoption of that provision would place Sri Lanka on the agenda of the UN Human Rights Council for years to come. This is besides the other repercussions it would cause.

Whilst this main highlight has remained in subsequent drafts, the latest one, knocked into shape this week, contains additions that make a pointed reference to the impeachment of Chief Justice Bandaranayake. The latest draft incorporates additions from would be co-sponsors. It was only this week the European Union announced that it would support the latest US resolution against Sri Lanka. This would mean that 27 EU member countries will be co-sponsors though some of them may not be members of the Human Rights Council. Others are also expected to join in, though their numbers will not be known until mid-March. Last year, the resolution was co-sponsored by more than 40 countries. Here is the latest draft circulating in Colombo’s diplomatic community as well as in Geneva. Diplomatic sources in Colombo said further changes to the draft were likely.

“Guided by the Charter of the United Nations, the Universal Declaration of Human Rights, the International Covenants on Human Rights and other relevant instruments,

“Recalling Human Rights Council Resolution 19/2 on Promoting Reconciliation and Accountability in Sri Lanka,
“Reaffirming that it is the responsibility of the Government of Sri Lanka to ensure the full enjoyment of all human rights and fundamental freedoms of its entire population,

“Noting with concern that the National Plan of Action does not adequately address all of the findings and constructive recommendations of the LLRC,
“Recalling the constructive recommendations contained in the LLRC’s report, including the need to credibly investigate widespread allegations of extra-judicial killings and enforced disappearances, demilitarize the north of Sri Lanka, implement impartial land dispute resolution mechanisms, re-evaluate detention policies, strengthen formerly independent civil institutions, reach a political settlement on the devolution of power to the provinces, promote and protect the right of freedom of expression for all and enact rule of law reforms,

“Also noting with concern that the National Plan of Action and the LLRC’s report do not adequately address serious allegations of violations of international law,

“Expressing concern at the continuing reports of violations of human rights in Sri Lanka [–, including] threats to judicial independence and the rule of law, [such as the dismissal of Chief Justice Shirani Bandaranayake; enforced disappearances; extra-judicial killings; torture; repression of the freedoms of expression and assembly; and intimidation of and reprisals against human rights defenders–] and failure by the Government of Sri Lanka to fulfil its public commitments, including on devolution of political authority to provinces as called for in Sri Lanka’s constitution,

1. Welcomes the report of the High Commissioner for Human Rights on the human rights situation in Sri Lanka [and urges / calls upon the Government of Sri Lanka to implement its recommendations];

2. Reiterates its call upon the Government of Sri Lanka to expeditiously implement the constructive recommendations made in the LLRC report and to take all necessary additional steps to fulfil its relevant legal obligations and commitment to initiate credible and independent actions to ensure justice, equity, accountability, [including investigations of violations of international law,] and reconciliation for all Sri Lankans;

3. Urges the Government of Sri Lanka to formally respond to outstanding requests, including by providing unfettered access, by special procedures mandate holders, in particular the Special Rapporteurs on independence of judges and lawyers; human rights defenders; freedom of expression; freedom of association and assembly; extrajudicial, summary or arbitrary executions; minority issues; and the Working Group on enforced or involuntary disappearances; and discrimination against women;

4. Encourages the Office of the High Commissioner for Human Rights andrelevant special procedures mandate holders to provide, in consultation with, and with the concurrence of, the Government of Sri Lanka, advice and technical assistance on implementing the above-mentioned steps;

5. Requests the Office of the High Commissioner for Human Rights, with input from relevant special procedures mandate holders, as appropriate, to present [to the Human Rights Council an interim report at its twenty-fourth session and] a report on the provision of such assistance and progress on reconciliation and accountability, including investigations of violations of international law, and the provision of technical assistance in Sri Lanka to the Human Rights Council [in an interactive dialogue] at its twenty-fifth session.”