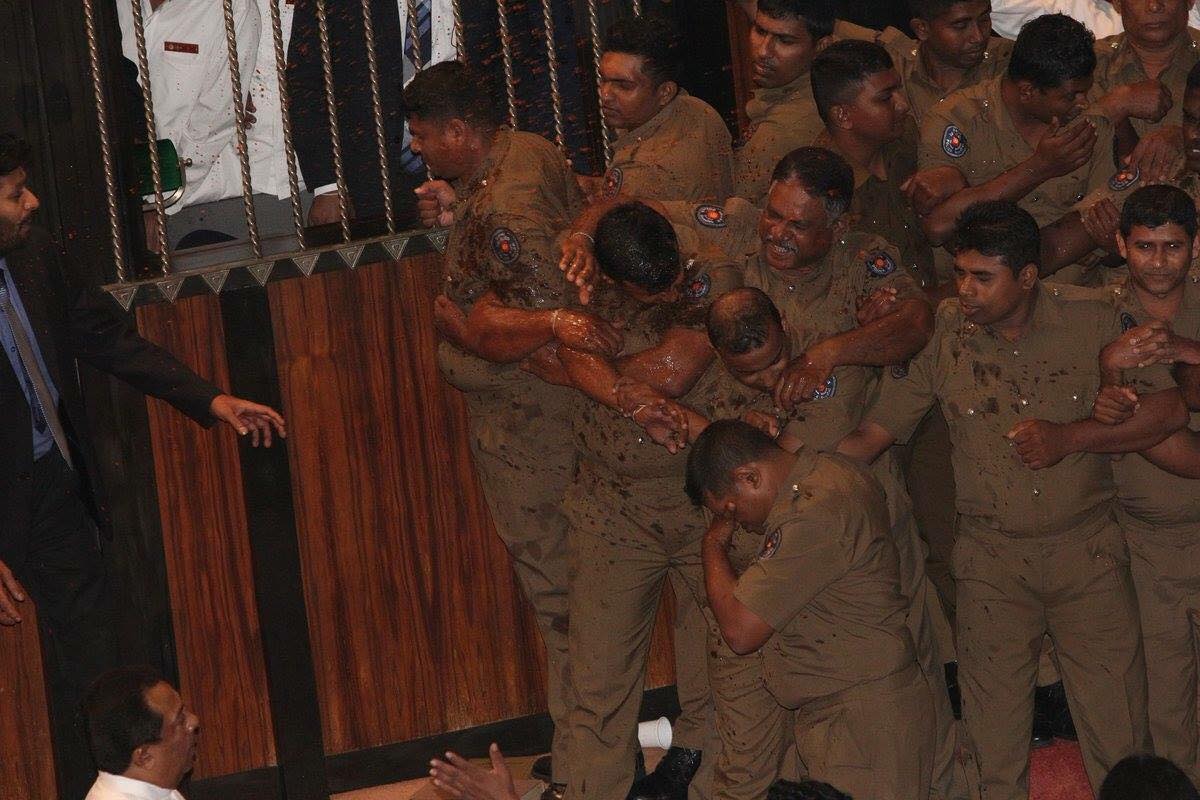 Amidst furore and violence caused by his MPs in Parliament, Mahinda Rajapaksa on Friday lost a trust vote for the third time this week.

The no-confidence motions were taken up in the wake of Mr. Rajapaksa’s controversial appointment as Prime Minister, replacing Ranil Wickremesinghe who was abruptly sacked by President Maithripala Sirisena three weeks ago. Former strongman Mr. Rajapaksa has however refused to accept the outcome of the first two motions — on his appointment and his address to Parliament — after failing to prove a majority in the House.

President Sirisena, who has now realigned with Mr. Rajapksa, did not endorse the earlier votes, but had promised to accept Friday’s vote. He is yet to acknowledge it or state his decision on future course, in the absence of a PM or cabinet.

The dramatic proceedings on Friday began with the lawmakers occupying the Speaker’s chair for nearly an hour from 1.30 p.m., the time the session was scheduled to commence. The MPs ripped out the microphones and telephone chords at the Speaker’s desk, and continued chanting slogans until about 30 policemen, locking arms in a chain, unexpectedly entered the chamber through the side door.

Behind them, Parliament staff moved cautiously ahead, escorting the sergeant-at-arms who was holding up the mace — the ceremonial staff required to hold proceedings — that shone brightly in the muted yellow lights above.

Right beside was Speaker Karu Jayasuriya, 78, clad in his black robe. Unable to occupy his seat, he stood firmly on the aisle and commenced proceedings through a microphone, in the face of heightening aggression from Mahinda Rajapaksa’s MPs. The lawmakers flung wooden chairs, copies of the Constitution and water mixed with chilli powder towards the Speaker and the MPs seated across.

Despite the attacks that came their way, the MPs who moved the confidence vote against Mr. Rajapaksa remained calm and chose not to retaliate. In rapid sequence, Tamil National Alliance (TNA) parliamentarian M.A. Sumanthiran moved a motion to suspend the day’s business, and it was passed by a voice vote.

Immediately, Janatha Vimukthi Peramuna (JVP) leader Anura Kumara Dissanayake moved a motion of no confidence against Mr. Rajapaksa — controversially installed as Prime Minister PM on October 26 — and his purported government. After JVP MP Vijitha Herath seconded it, the Speaker called for a vote. A loud chorus instantly emerged from the ‘Opposition wing’. “The Ayes will have it,” the Speaker declared.

Addressing Colombo-based foreign correspondents later in the evening, Mr. Wickremesinghe said the “anarchy and instability in the country” had to end. “We have proved yet again that we have the numbers, and our side is willing to show a way out.” Observing that he had never seen a day like this in the House, in his four decades as lawmaker, he said Friday’s chaos was a “black chapter” in the country’s long parliamentary tradition.

“It was a deliberate breaking up of the Parliament by a group of people claiming to be the government… it was thuggery,” he said, adding in jest: “I hope this won’t be a precedent for the Lok Sabha.”

Though Mr. Jayasuriya declared the motion passed, aides of Mr. Rajapaksa claimed it was invalid, and accused the Speaker of bias.

On Thursday, following a similar assault on the Speaker, Mr. Sirisena assured the Speaker that he would ask the MPs to respect parliamentary proceedings and act responsibly.

As violence escalated in the House on Friday, Mr. Sirisena tweeted at 2.13 p.m.: “I urge all parliamentarians to uphold principles of democracy parliamentary traditions at all times. I will not prorogue the Parliament under any circumstances.”

However, little changed on the floor. At least 11 policeman, and three lawmakers seated in front row suffered wounds in the attacks. JVP’s Vijitha Herath suffered a cut on his forehead.

“The President and his group violated their promise. Their parliamentarians behaved like beasts, not like human beings,” Mr. Herath told The Hindu, minutes after the sitting ended, with an adjournment until November 19.