Mahinda Chinthana’ and the University Crisis 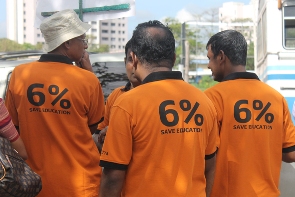 by Laksiri Fernando
21 August 2012 will go into the history of Sri Lanka as a Black Day for the whole education system. The most stubborn Minister of Higher Education, SB Dissanayake, has decided to close down all universities, except medical faculties, exposing the government’s complete inability to resolve, clearly a straight forward salary issue and a policy dispute with the academic community.

Academic strikes are not usual in any country let alone Sri Lanka. The academics would not have resorted to trade union action if there were other avenues to resolve their grievances. They are one of the most temperate sections of our society. The grievances that led finally to the current strike have been accumulating for over three decades. All the negotiations before and after the strike have failed, due particularly to the intransigence of the Minister. He is apparently trying to emulate the Army Commander or the Defence Secretary, tragicomically, in combating the academics in a warlike fashion.

It is not long time ago that overwhelming majority of the academics decided to support the present government at the last national elections in 2010, presidential and parliamentary, considering the circumstances, and believing that the government would deliver the promises that it gave in the Mahinda Chinthana, the election manifesto of the current President. I vividly recollect the mammoth meeting of academics attended by over 3,000 at the Temple Trees makeshift meeting hall in January 2010 prior to the presidential elections.

Mahinda Chinthana 2010 talked about five hubs and one of which was a ‘Knowledge Hub’ that has now become a standard joke. In explaining this hub, a whole section was devoted from page 75 to 77 on university education admitting correctly that “University is the centre of generating and disseminating knowledge.” The ‘Chinthana’ however was not truthful in saying, “I provided the necessary infrastructure and human resources to establish new universities and to develop the existing local university system during the past four years.” No new university was established under the incumbent President and the last one, Uva Wellassa, was established in June 2005. More appalling has been the deteriorating funding for universities that has been clearly explained by the University of Moratuwa Teachers Association in their presentation, “Miracle of Asia and Higher Education.” During the period, while the student population has increased from 62,000 to 70,000, the annual expenditure per student has decreased from Rs 120,000 to Rs 105,000.

Previously, the funding difficulties were understandable given the war situation in the country and the academics in good faith believed that the promise in the second ‘Chinthana’ would be fulfilled with ‘necessary infrastructure and human resources’ for the universities. However, the situation has deteriorated by commission and omission. The following was what it said about the ‘knowledge hub.’

“We have the opportunity to make this country a knowledge hub within the South Asian region. I will develop and implement an operational plan to make this country a local and international research and training centre for knowledge within this year. With a view to achieving this objective and to enable the structural necessities, I will restructure the University Grants Commission.”

Not that all academics believed what ‘Chinthana’ said about the hub, but wanted to give a chance for some reforms and improvements. It was within a year that an ‘operational plan’ was supposed to be developed for the hub! It also promised a restructure of the University Grants Commission or the UGC, but it is the same old UGC that is functioning even after two years today. Reform of the UGC was necessary for very many reasons. For example, there was no representation of FUTA or any other union within its structure. If the organized academics were represented properly within the UGC, many of the controversial issues could have been smoothly ironed out by now or even before the strike broke out unnecessarily. First and foremost, the UGC should have been separated and independent from the clutches of the Ministry of Higher Education. Even its location within the same premises has become a great impediment, the Minister poking his finger into all academic matters.

There were other promises. There was rather an extravagant promise to give all academics houses! Another one was to provide scholarships to lecturers to pursue their postgraduate education in leading foreign universities. Of course this was necessary, but never fulfilled other than what previously available through the National Centre for Advanced Studies (NCAS), yet limited in funds and selection. As a result of this lacuna, only 40 per cent of present staff has PhD qualifications. Most abominable are the staffing shortages. There are over 7,000 estimated academic cadre positions, yet the universities are forced to work with only around 4,000 academics. The list and the grievances can go on and on, but what is important is to find solutions.

Without depending on mere demands, FUTA has even come up with a policy formulation. That is to increase the allocation of funds to education up to 6 per cent of the GDP. In this respect the present leaders of FUTA have been quite constructive. If one goes through the promises of the Chinthana on education in general from page 70 to 75, with expanded infrastructure for science and language laboratories and libraries, even this allocation might not be sufficient. It also talks about giving postgraduate training for all principals and education administrators!

It is true that there is a considerable gap between the present allocation of 1.9 per cent and the demanded 6 per cent of the GDP for education. But the present allocation is a pathetic result of keeping the education in the backburner throughout years or decades for various reasons and on multitude of excuses. That is mainly why we have all problems in education at present from A to Z. In the 1970s, the allocated percentage was not far behind and often exceeded 5 per cent. What is necessary at present is the political will. What the academics are asking in fact is to convert the promises of Mahinda Chinthana into actual practice.

There is a close connection between the quality of general education and the quality of university education. When I went back to university teaching in 1997 after working abroad since 1984, what I found was a deteriorated standard of university entrants compared to the previous experience. The skills, abilities and even attitudes of new entrants were poor and worsening almost year by year until my retirement in 2010. This is apparently the result of poor conditions of school education largely due to the lack of resources, human and material. These are matters that the teacher unions should take up in conjunction with FUTA.

The demand for allocation of 6 per cent of the GDP for education should be a common demand of all teachers, universities and schools alike. It should be the demand of all parents and students throughout the country especially considering the deteriorating standards of examinations, increasing mistakes in exam papers, Z score fiasco and other ailments in the education sector. It was good news to hear that the Commissioner of Elections has taken firm steps to prevent the ongoing A/Level examination being disrupted by partisan election campaigns. The country is fed up of senseless electioneering without much attention to social and citizens’ needs.

Of course FUTA has placed other demands as well. Among them, except the demand for scholarships for the children of academics, other demands appear reasonable and rational. The scholarship demand perhaps was a slipup considering that a union has to deal with different interests and opinions. I understand that it has now been withdrawn. On the salary matter, the academics are asking for 20 per cent increase on the basic salary because that is what would count when it comes to calculating their pensions at the end. Various santhosam allowances may be acceptable, but that is not what they are focusing on.

Two other key demands are ‘no university reforms without consultation’ and ‘no political interference on academic matters.’ Both demands are to deal with academic freedom and autonomy of higher education institutions, very dear to any academic in the world. As one of the authors of the UNESCO recognized ‘Lima Declaration of Academic Freedom (World University Service, 1987),’ I was particularly delighted to see these demands being taken up by our young colleagues. The first demand would remind us how democracy started in England demanding ‘no tax without representation.’ It is the same logic and dynamic to ensure democracy within the university system without reforms being over determined from above by bureaucrats or under-educated politicians.

The second demand may be more important in the present context, ‘no political interference on academic matters.’ As FUTA and many academics have explained through multitude of articles, the proper functioning of Senates of many universities and even the Councils are hampered by political interferences. More alarmingly, academic decisions even regarding courses and curricular are taken at the Ministry and not at the universities. Perhaps for these encroachments, some academics themselves, including myself, might be culpable. Believing that ‘new era’ has dawned under Mahinda Chinthana, many academics tried to work closely with the government ultimately without any proper results. I remember how the UGC and the Vice Chancellors got involved in election campaigning in 2010.

The Minister and many government politicians have accused the present academic strike as politically motivated. It may be, or maybe not. If it is political, it is definitely different to petty party politics. The academics have now learned a lesson and that lesson has taught them that without major changes in governance at least in the education sector, the whole education system is in danger and would collapse. If this strike fails, the main loser would be the country and its education system.

Some people have asked, without much imagination, how the government could find money to increase the allocation for education up to 6 per cent of the GNP. The University of Moratuwa Teachers Association (UMTA) has again given the answer. They clearly show that the reduction of defence expenditure by 4 per cent could double the recurrent expenditure on university education. This is only an example. This is apart from stopping waste of money due to corruption or misuse like hedging deals and other contracts. Rajapaksa government has got their priorities completely mixed up. There are many other ways of finding money if there is political will.

There is concern expressed that the academic strike is not that popular among the people or effective. Of course it is not ‘effective’ like a strike in the transport sector for example. That is in fact not the purpose. Since 4 July academics have clearly shown to the country, even forgoing their salaries, that things are not quite right in higher education. This is loud and clear. The whole academic community is around 4,000 people. The Minister initially said that only 30 per cent are on strike. But now he has closed down all universities admitting the strike as an unqualified success. There was a time when even the victimisation of the FUTA President could not move the academic community into action. Those days, the academics were a lethargic community. But now it has changed because of the pressing needs. The next stage of the struggle perhaps should be to bring the whole education sector into action and force the government to resolve the crisis without harming the education of university as well as other students.