Mahara prisoners shot as they asked for water -Ruki Fernando 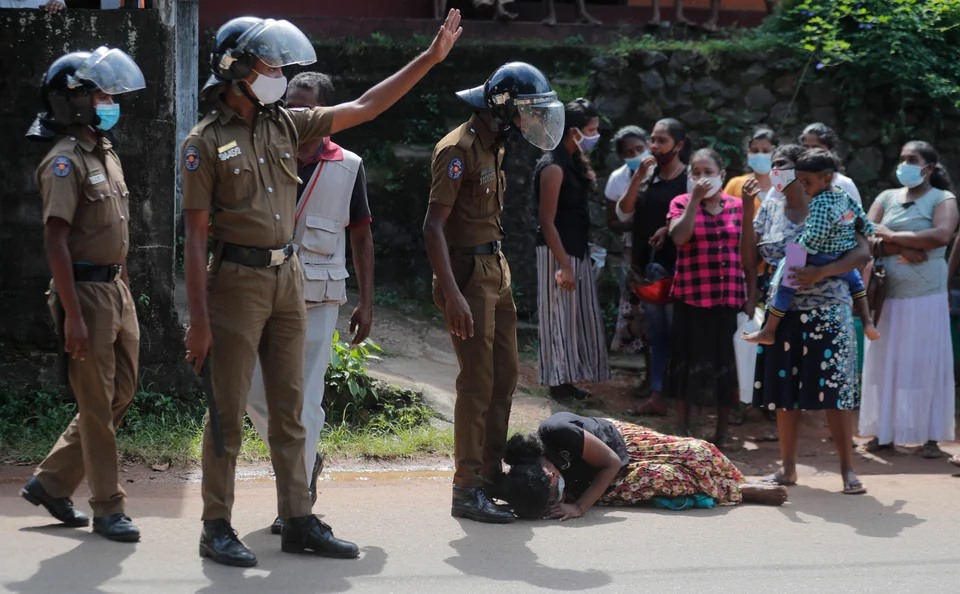 Image: A grieving mother of a prisoner begging a police officer to find out info on her son in front of the Mahara prison.

Eleven prisoners were killed and more than 100 injured in unrest at the Mahara prison that started on November 29. The Minister of Justice appointed a committee to inquire into the incident. The interim report, which was tabled in Parliament on December 9, has not been officially released but a copy was shared with the author by a Member of Parliament.

According to the committee, at the time of the incident, Mahara prison had 2,782 inmates, three times the number it could accommodate. Of these, 77 percent or 2,148 were suspects (remand prisoners). There were 112 patients who had tested negative for COVID-19 from Welikada prison hospital and some more from Bogambara, an old prison facility that was opened up to hold prisoners in quarantine, had also been brought to the Mahara prison hospital.

The committee noted delays in the release of prisoners who had been given bail and paid. It recommended expediting releases of other inmates who could be freed after payment of a fine or bail based on instructions given by the Attorney General to the Police. The committee recommended that the prison department filed motions on behalf of inmates who have not been able to post bail in order to facilitate their release based on personal bail. It also recommended implementing a process to release convicted prisoners considering the length of their sentences, giving priority to the elderly.

Immediately after the incident, the then State Minister in charge of prisons stated in Parliament that prisons in Sri Lanka had a capacity to hold about 11,000 people but had been accommodating 32,000. According to Prison Department statistics, 20,420 (more than 70 percent) of those admitted as convicted persons to prisons in 2019 was due to defaulting on fines. Statistics also indicate that 78 to 82 percent of those admitted to prisons between 2015 to 2019 were suspects (remand prisoners). Some were remanded because of their inability to make deposits for bail while others were remanded due to police and magistrates choosing remand as the norm and bail as the exception.

The committee noted that the news about the results reached inmates and those outside the prison through unofficial channels and this had caused unrest and fear about the risk to life. The committee concluded that the protest was a reasonable one driven by demands to protect their lives. The four key demands were to release those who had already been granted bail, provide food that was suitable for consumption, do PCR tests on all inmates and remove those who test positive for COVID-19 from the prison. The committee said the intensity of the protest was linked to desperation to get quick solutions from prison officials.

The report stated that no inmates had access to or used firearms and that only prison officials had used firearms, although this was after using tear gas, rubber bullets and shooting in the air. One inmate was reported to have been injured due to shooting in the initial stages in the afternoon of the 29th after which those gathered had dispersed in two directions. There were problems with water and food supply on the 30th and more unrest that evening, including demands for water, which had led to shots being fired and some inmates being hit. The report stated that only postmortems could determine if deaths were due to shots fired at close range and recommended that bodies should not be buried or cremated until the postmortems were done.

Requests for food that was fit to eat was one of the reasonable demands of the protest identified by the committee, which included this as a recommendation in the interim report. The committee also recommended implementing a mechanism to provide food and other essentials through welfare centers at times when visits were suspended. This is taking into consideration that majority of inmates get food from visiting family members. However, the interim report had not looked at budgetary implications, with the average cost of food for a prisoner per day in 2019 being Rs. 151.

The committee noted that inmates who had a fever before the incident were not taken to the prison hospital for examination. It stated that after the incident more PCR tests and Rapid Antigen tests were being done and that those who had tested positive for COVID-19 were taken away from the prison. They recommended doing PCR tests on those released as soon as possible, sending those testing positive to treatment centers and those testing negative for quarantining at home. However, the committee did not recommend doing PCR tests on all inmates, a demand that had also been put forward about two weeks before the Mahara incident by the Committee for Protecting Rights of Prisoners. The inquiry committee also recommended appropriate healthcare for non-COVID-19 patients.

The report mentioned that when the committee visited the Mahara prison on December 3, they had asked the Superintendent to facilitate calls from detainees to families. But even on December 5 there were desperate families outside the prison gate demanding to know about their loved ones, pleading for at least a phone call from those who had survived. The committee did not note this significant failure in their post-incident observations but they recommended increased opportunities for phone calls between inmates and families and observed that a center had been established to facilitate better communication between inmates and families.

The report found that inmates had consumed medicine in the prison hospital but reserved expressing an opinion about whether this had an effect on inmates’ behaviour until expert opinions were obtained. It is noteworthy that on December 2, the Sri Lanka College of Psychiatrists clarified that drugs used in psychiatric practice were not responsible for violent or aggressive behaviour and that many such drugs promoted calmness and, in some cases, drowsiness.

The committee noted that some inmates had used the unrest to attack each other leading to injuries, that two prison officials had been held hostage for some time, and that there had been destruction to buildings, property and documents. The inmates were reported to have had iron rods, knives, machetes and swords. However, there was no comment in the report about prison officials who had allowed these weapons to be taken to inmates and allowed inmates to keep them. The report indicated that the fighting among inmates was in the night, after the initial shooting by prison officials, which appeared to have been in the afternoon or evening. The report stated that there had been shooting by prison officials even while inmates were fighting with each other.

The interim report confirmed problems with food, communication with families and lack of PCR tests for all prison inmates, even while the rate of those testing positive at the Mahara prison was six times higher than in the rest of the country, and the prison was filled to three times its capacity. The report confirmed shooting by prison officials and recommended not burying or cremating dead bodies until postmortems had been done.

The interim report recommended expediting investigations and prosecutions against inmates responsible for damage to state property and other crimes but stated that the committee was unable to express an opinion about the negligence of officials, promising that attention would be paid to this when submitting the full report with more details.

As we await the judicial process to take its course, the interim report deserves further study, along with the much more comprehensive report done by the Human Rights Commission of Sri Lanka and a note prepared by the Committee for Protecting Rights of Prisoners.