Lynching in Sialkot and burning alive in Sri Lanka: A comparison – Latheef Farook 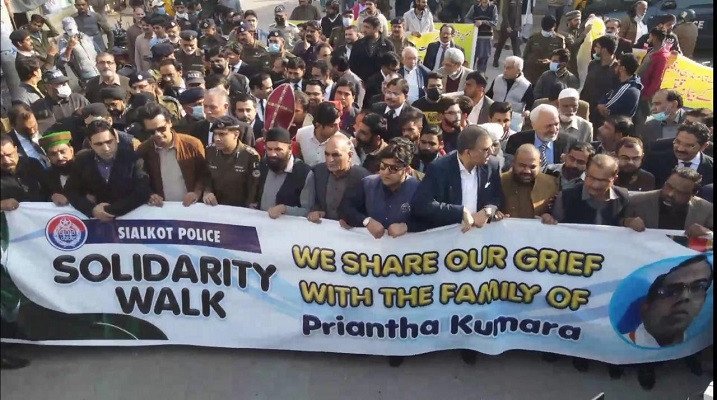 Image: Has any one seen anything like this in Sri Lanka when Muslims burnt to death by alt Sinhalese mobs?

On Thursday 3 December, Sri Lankan national Priyantha Kumara, was brutally killed by workers of the factory and his body was set on fire in the Pakistani city of Sialkot, bordering India.

This sheer barbarity was promptly condemned by all Pakistanis. There were demonstrations all over Pakistan and women demonstrated in Lahore. Prominent ulemas expressed their deep condolences. Though Three-e-Labia Pakistan party was accused the TLP officially distanced itself from the incident.

Responding promptly, Pakistan Prime Minister Imran Khan expressed his disbelief and anger in a tweet saying: “The horrific vigilante attack on a factory in Sialkot and the burning alive of a Sri Lankan manager is a day of shame for Pakistan. I am overseeing the investigations and let there be no mistake, all those responsible will be punished with the full severity of the law. Arrests are being made.”

At a condolence meeting at the Prime Minister’s Office in Islamabad, Prime Minister Imran Khan announced that Malik Adnan who tried to save Kamara’s life from the mob, will be awarded the Tamara I Shoat — the second-highest civil award for bravery bestowed by the Islamic Republic of Pakistan. The business community of Sialkot raised $ 100,000 for Priyantha’s family, and his widow would continue to receive his monthly salary. Police arrested the most wanted accused.

Sialkot Bar decided not to appear on behalf of the culprits. Punjab Chief Minister Usman Buzdar directed to ensure that the trial of the suspects is completed and file the case in court within 14 days. The police have, so far, arrested 139 people of which 34 are main suspects.

This contrasts vividly with the treatment meted out to the peace-loving Muslim community in Sri Lanka who has been subject to violence involving killing, burning of commercial, residential properties and mosques besides burning the Holy Quran and even urinating on them ever since the end of the ethic war in May 2009. It is now discerned that this catastrophe appears to have been pre-planned by successive governments.

In the aftermath of the war there began a sinister campaign portraying Muslims as a threat to Sinhalese, Buddhism and the country. Then came the kidnapping of Muslim businessmen followed by ‘grease yaka’ mayhem when Muslims were attacked during the holy month of Ramadan and prevented from attending the night ‘Taraveeh’ prayers while women lived in fear until men folk returned home.

A Buddhist monk with six of his henchmen demolished more than four centuries old shrine of Sheikh Sikkandar Waliullah in Anuradhapura on 14 June 2011. This was followed by vandalism at the Dambulla mosque led by Ven. Inamaluwa Sumangala Thero on Friday, 20 April 2012.

British citizen Khuram Shaikh came to Sri Lanka in 2011 with his Russian girlfriend to spend the Christmas holiday. His girlfriend was gang raped and Khurram Shaikh was brutally attacked and killed.

Since then, one after the other, Sinhala extremists began attacking mosques, religious schools, street demonstrations with posters of pigs with the Arabic word ‘Allah’ on its face, posters of Holy Ka’ba with a dog on it, attacking girls wearing hijab and abaya and many more.

This continued until the well-organised attacks on Muslims and their properties in Aluthgama, Dharga Town and Beruwala following the highly inflammatory speech by lawless Buddhist monk Galagoda Atte Gnanasara Thero used by the government to terrorise Muslims.

They looted and burnt Muslim owned properties, burnt mosques, copies of Holy Quran and urinated on them besides shooting and killing a father of two children during curfew hours under the watchful eyes of police.

Hundreds of Muslims became paupers overnight. Fed up of violence around 95% of Muslims, voted for the Maithripala Sirisena-Ranil Wickremesinghe government to power in 2005 only to realise they were no better.

Under Maithri-Ranil government Muslims in Gintota were attacked followed by organised attacks in Ampara. In March 2018 Muslims in Digana and other villages in the central hills were attacked, looted and their commercial and residential properties and mosques burnt. The area looked like battlefield.

In Digana, a 27-year-old Muslim youth Abdul Basith was burnt alive to death. A doctor at Teldeniya hospital refused to treat a bleeding Muslim saying Muslims are terrorists. These senseless attacks continued until the Easter Sunday bombings and killings involving few Muslims in April 2019.

Insulting religious feelings of Muslims troops entered mosques with boots accompanied by sniper dogs during the Holy Month of Ramadan fast. Under such a frightening atmosphere, President Sirisena left to China to attend an insignificant conference that did not need the presence of a head of state leaving Muslims at the mercy of the mob.

On the same day a mob of around 500 with iron rods, swords and other such items began their killing spree. They burnt and destroyed around 30 Muslim villages.

Sinhala three-wheel drivers refused to take a severely battered Muslim dragged on the street to hospital. In the process he died. A fasting Muslim was chopped to death.

In Wennappuwa a 49-year-old furniture trader M.S. Fouzul Amen was at home with his family to end the Ramadan fast when a mob started to smash his vehicle. Ameen came out to stop. The mob turned on him and slashed his neck with a sword, poured turpentine on his face and left to die in the presence of his 16-year-old son Ajmir.

Fasting Muslim women grabbing their children ran to Sinhalese neighbours for safety. Some accommodated and even gave food while others chased them out.

Organised thugs began attacking and burning mosques, houses, business establishments, vehicles and whatever owned by Muslims under the watchful eyes of the forces. It started from Chilaw before spreading to Gampaha, Kurunegala, Nikawaratiya and many other places.

Mobs laid siege to the Kuliyapitiya, Hettipola, Aukana, Kottampitiya areas and moved to Nikaweratiya town area driving Muslim families, during the month of Ramadan fast, into paddy fields for safety. They burnt vehicles and attacked passengers. At least three mosques were attacked.

Maithri-Ranil government made no moves to stop the violence.

Sinhala lawyers refused to appear for Muslims taken into custody, doctors refused to treat Muslim women, Muslim shops were boycotted and prevented from trading in the market and some temples began advising Buddhists not to deal with Muslims.

Justifying the violence, the mainstream media unleashed a full-scale campaign demonising Islam and describing Muslims as terrorists. The mob functioned as government within the government and moved through towns during curfew hours in full view of the police.

Now the question is where were the MPS, ministers, politicians, demonstrators, activists and others who flocked to Priyantha’s house when Muslims were persecuted only because they were Muslims?

The Presidential Commission inquired into Easter Sunday killings recommended criminal charges against Maithri, Ranil and top officials. However, they are free and still in politics. This happened in Dhammadipa which is today on the verge of political, economic and social collapse due to racist politics.

Isn’t it time that those who follow Buddha’s Buddhism come forward to lead the country, bring communities together and march towards a better Sri Lanka for the common good of all and turn the island once again into a land of peace and harmony?