Looking at Some Important Issues in Sri Lanka 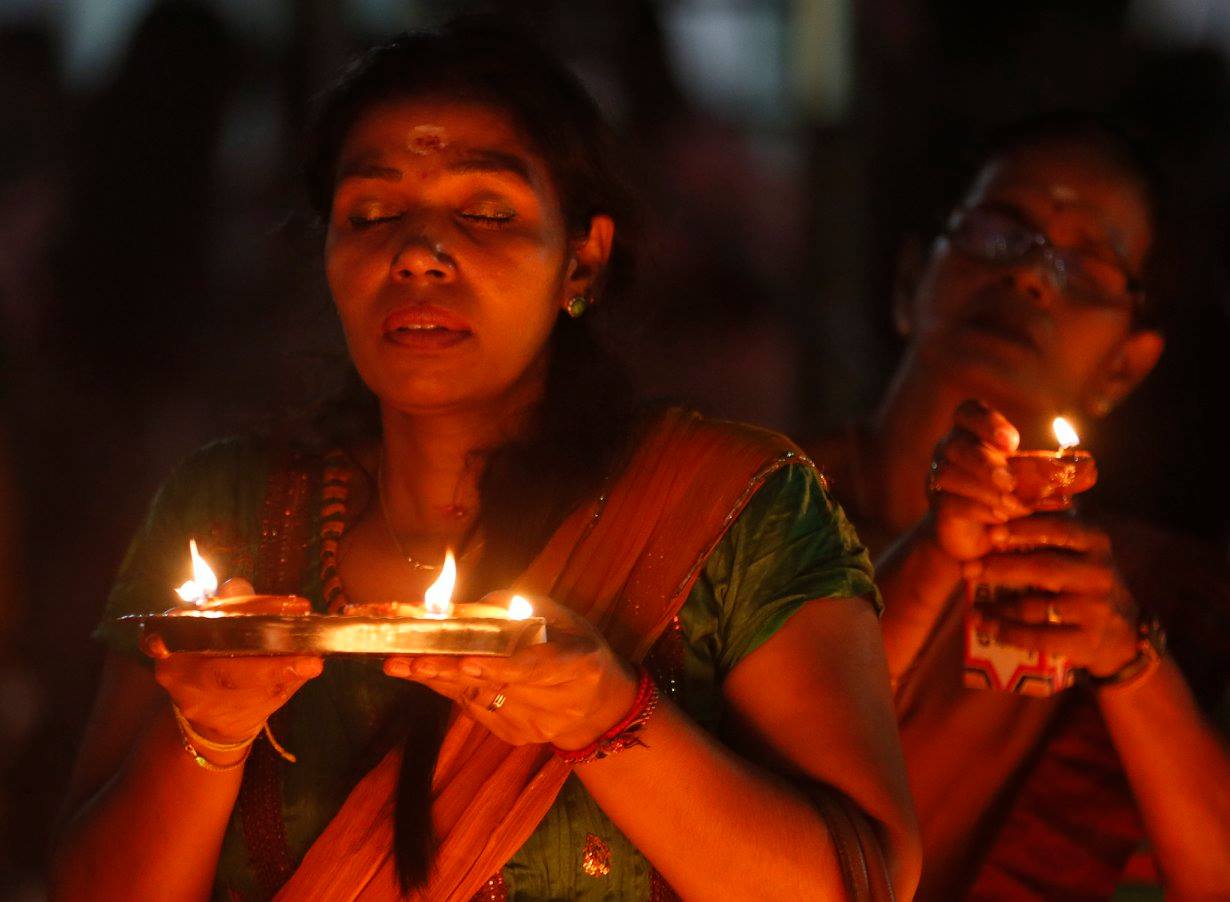 Image: Will their prayers be answered by the authorities? Shivarathri celebrations at a Shivam temple in Colombo (c) Dinuka Liyanawatte.

What’s your general take on the performance of the coalition government?

We in Sri Lanka tend to understand this government purely as a coalition of political parties. But I think this is also a coalition of ideologies, and what’s interesting is that the ideological fault lines don’t neatly fit the party divisions. So ideological differences don’t exist merely between the [United National Party] UNP and the [United People’s Freedom Alliance] UPFA faction in government. It’s clear to me that even within the UNP, there are certain fundamental ideological differences, and these differences are ultimately going to shape the reform agenda of the government. The recent proposals on a new counterterrorism law illustrate this problem. Attempts to enact legislation that denies suspects prompt access to legal counsel is another example. These proposals are not emanating from the UPFA — they are being championed by actors from within the UNP.

So in this context, I think the coalition government’s performance has been mixed. On the one hand, it has engaged the international community, enacted progressive legislation such as the [Right to Information] RTI Act, and has ratified international instruments such as the enforced disappearances convention. On the other, it has attempted on a number of occasions to enact repressive legislation. This bipolarity is becoming a regular feature of this government. Meanwhile, it has made very slow progress on combating corruption and prosecuting past crimes, including international crimes committed during the war, and crimes against religious minorities. So a culture of impunity still prevails under this coalition government.

Colombo’s reform agenda is wide-ranging, but let’s turn to transitional justice. On that front, are you satisfied with the government’s performance thus far?

The enactment of the [Office of Missing Persons] OMP Act was a positive move. It now needs to be operationalized, and that requires the president to assign the subject of the act to a particular minister. That minister will then need to appoint a date on which the act comes into operation as per section 1(2) of the act. So I’m afraid we are still a fair distance away from having even the first of the four promised mechanisms established. It is therefore obvious that progress has been slow — particularly in terms of ensuring accountability for international crimes.

However, we need to place the transitional justice agenda in context. I believe we are making steady progress in terms of constitutional reform. So rushing the transitional justice process to meet the March 2017 deadline is not prudent if it means compromising on substance. It is better to be sensible and defer the process for a further period of time, and ensure that all the mechanisms including the judicial mechanism is delivered together to the satisfaction of those actually affected. Let us not forget that we began this process to deliver accountability — not anything that falls short of it.

Do you have any concerns that the government may not be fully committed to implementing a credible, comprehensive transitional justice program?

As mentioned above, my concerns relate to the ideological factions within government. A lot depends on which faction prevails. If those who champion the counterterrorism law prevail, I am certain we will not see a credible transitional justice program. But if a more progressive faction within government is empowered to deliver on its promises made in Geneva [at the UN Human Rights Council] last year, we could still see this process put back on track.

I hope local civil society and international actors understand these dynamics and act strategically over the next few months. They must understand that this government and the constituent political parties are not homogeneous. Transitional justice will ultimately depend on whose voices in government are empowered.

How involved should international actors be in Sri Lanka’s transitional justice process?

I’m starting to wonder about this. Let me say at the outset that international actors have been an indispensable part of getting Sri Lanka on the international agenda and putting pressure on the government to commit to a transitional justice agenda. But this involvement has given us diminishing returns over the last year or so. Some international actors have not understood the dynamics at play and have at times overestimated the government’s sincerity. A good example is the discourse on sequencing. Local civil society actors have been pressing for sequencing that does not place accountability on the back burner. But this has not been the consistent view of international actors and advisors. I’m afraid the lack of deference to local demands has cost this process important momentum in terms of establishing an accountability mechanism. So I think it’s time international actors trust and defer to local civil society actors and play more of a supportive role. At the end of the day, Sri Lanka’s transitional justice process has to be locally owned and driven.

Negotiations are currently underway for Sri Lanka to regain the Generalized Scheme of Preferences Plus (GSP+). How has the application process been progressing? What do you expect to happen?

Sri Lanka applied for the GSP+ facility and is now awaiting the European Commission’s (EC) assessment of the application. There is some expectation within government that the assessment would reap a positive result. However, two major challenges remain.

First, the government must undertake legislative reform to ensure suspects are granted prompt access to legal counsel — which means access from the point of arrest. The recent proposals to amend the Code of Criminal Procedure Act fell short of this expectation, as it only granted access after the first police statement is recorded. I’m pleased that those proposals have been shelved, as the status quo under our law is better. Rules were issued in 2012 under the Police Ordinance to give lawyers the right to meet their clients in any police station. While this is not the same as giving suspects prompt access to counsel, it is better than what was proposed recently by the Minister of Justice.

Second, regaining GSP+ will depend on reforming the [Prevention of Terrorism Act] PTA. The EC highlighted a number of problematic provisions in the PTA in a letter sent to the government in 2010. Among the concerns raised was the admissibility of confessions to a police officer and unduly prolonged detention. Until the government takes steps to reform the PTA along these lines, it is difficult to see the EC providing a positive assessment of Sri Lanka’s application for GSP+.

Intended to replace the Prevention of Terrorism Act, Sri Lanka’s draft for new counterterrorism legislation has received considerable criticism — both domestically and internationally. Why is the draft so problematic? Do you anticipate that the draft legislation will be modified significantly before it’s eventually passed?

Continuing the point made above, reforming the PTA is a vital part of regaining GSP+. However, the recently unveiled policy and legal framework for a new counter-terrorism law is deeply problematic and does not meet international standards. So I have doubts as to whether Sri Lanka can secure GSP+ if it continues to pursue the counterterrorism proposals in their current form.

The counter-terrorism proposals have been criticized for a number of reasons. But I think three of them stand out. First, the proposals deny suspects prompt access to counsel. A suspect arrested under the proposed counterterrorism law would be given access to counsel only after the police statement is recorded. It is curious that the language is almost identical to the proposed amendments to the Code of Criminal Procedure Act. It can be assumed that the same actors are involved in influencing the drafting process. Second, the proposals make confessions to a police officer admissible. This is hugely problematic given the widespread practice of torture in the country. The Human Rights Commission of Sri Lanka recorded 420 torture complaints in 2015 alone. So the practice has not ended despite the government change in January 2015. This is why civil society actors have insisted that the new counterterrorism law not make confessions to police officers admissible.

Incidentally, a set of proposals on national security legislation prepared by the Law Commission of Sri Lanka earlier this year recommended that confessions be made admissible only when made to a magistrate, and that access to counsel should not be denied to suspects. These proposals by the Law Commission, however, were unfortunately discarded.

Finally, the new counterterrorism proposals have an extremely wide range of offenses. I’m yet to see such a broad list of offenses in any other counterterrorism law. The most problematic of these is the offense on speech and writing that ‘threatens unity.’ I’ve written on this issue here — so I won’t repeat the arguments on why this offense is deeply problematic in terms of safeguarding the rights of journalists and political dissenters in Sri Lanka.

I honestly believe the policy and legal framework for a new counterterrorism law should be discarded and the Law Commission proposals taken up as a base document for replacing the PTA. But I doubt this would be the case. The new counterterrorism proposals are now before the parliamentary sectoral oversight committee on national security. I expect this committee will at least consider the Law Commission proposals, and recommend substantial revisions to the existing policy and legal framework for a counterterrorism law.

Gehan Gunatilleke is the Research Director at Verité Research, a think tank based in Colombo, Sri Lanka.

Interviewed by Taylor Dibbert. This interview has been edited lightly.
huffingtonpost.com