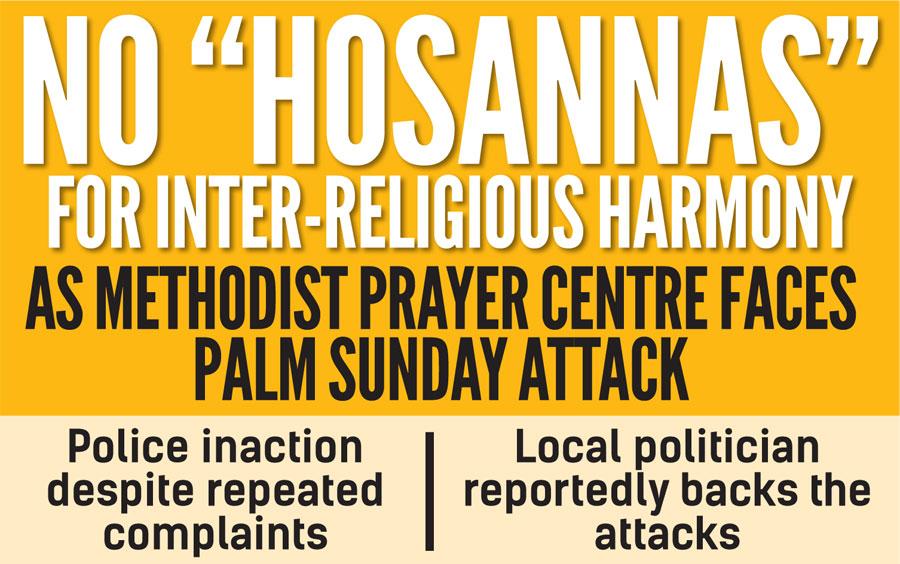 While many Christians, non-Christians, politicians and government leaders in Sri Lanka were gripped by the fire that engulfed the historic Notre Dame Cathedral in Paris last Monday, little attention was given to a mob attack on a small Christian congregation in the remote hamlet of Kumbichchikulama, near Anuradhapura.

A Methodist congregation comprising some 12 to 15 persons were subject to death threats, stone throwing, firecrackers being hurled at them, and even a hostage situation when they gathered for service on April 14 Palm Sunday. What made the attack even more conspicuous was that it took place in the very presence of the President Bishop of the Methodist Church of Sri Lanka,

Describing what happened on that fateful Sunday Bishop Perera said: “Palm Sunday was a glorious Sunday where we celebrated the triumphant entry of Jesus to Jerusalem as the King of all Kings. I approached this place unannounced having heard that there had been a series of attacks whenever we had our worship in the past few weeks. The time was where those who were celebrating the Sinhala and Tamil New Year were keeping the Punya Kalaya which is the time assigned for religious observances. When I approached our centre my vehicle was surrounded by a gang of young people numbering 20 to 25, and as I disembarked from my vehicle I greeted them for the New Year. But their response was murderous threats as well as demanding that I leave the place with my Methodist worshippers. I tried to negotiate with them and talk to them nicely, but the response I got was threats and demands, and they also blocked my way from entering the Methodist Church premises.”

The group later pelted stones and hurled fire crackers at those present at the Methodist Centre named ‘Adara Sevana’, and forcibly locked the premises’ gates, effectively taking Bishop Perera and his congregation hostage.

Following a complaint by the priest-in-charge Father Dinuka Silva and Rev. Perera, the Anuradhapura Police station yesterday summoned both parties to the police, but the dispute could not be settled through dialogue. “They are insisting that we close down our worship centre, which we are not prepared to do,” Rev. Perera said.

The Bishop had earlier complained that the situation got aggravated as the police had not taken any action despite repeated harassment by a small group of young men in the area. Despite the gravity of the situation, even yesterday there was no senior police officer present at the Anuradhapura Police Station to help facilitate the dispute.

“I expected that at least the HQI would have been there, but there was only one police officer who handled the inquiry. But I am pleased in the way it was handled,” Rev. Perera said, adding that he hoped and prayed that further action would be taken in the right direction without any delaying tactics being adopted.

“The group later pelted stones and hurled fire crackers at those present at the Methodist Centre named ‘Adara Sevana’, and forcibly locked the premises’ gates, effectively taking Bishop Perera and his congregation hostage”
Describing the history of Methodist Centre at Kundichcham Kulam, Rev. Perera explained that the church had purchased the land with a small house 17 years ago. “On weekdays  we run a social service project where we provide self-employment opportunities for disabled persons. About 300 disabled persons have connected with us, and the workers come from all over Anuradhapura. This service is done without any religious or racial colouring. On Sunday we have about 12 to 15 people who come there for Sunday service,” he said.

Responding to early allegations of noise pollution, Rev. Perera said: “We had a small sound system. Even that we removed. This was not there on March 31or April 14.  These are only lame accusation.” The Bishop charged that the entire issue was created by one woman who instigated a group of young people. “We have informed this to the police and even given their names. Their demand is to close down the place of worship which we are not ready to do. Our freedom of worship should be protected,” he stressed, adding that the police inaction in this matter was of concern. “Why is the police failing to take action? These  are puzzles I cannot explain,” he said.

The head of the Methodist Church noted that there was no involvement by other religious groups in this particular incident. “No monk is involved in this,” he said. But hostility towards the

prayer centre had reportedly increased in the last few weeks. “When the attack on March 31 occurred, it had the backing of a local politician,” Rev. Perera said. According to other sources, the March 31 attack on the centre was allegedly backed by a Local Government politician of the Sri Lanka Podujana Peramuna (SLPP).

Commenting on the attack, General Secretary of the National Christian Council Rev. Maxie Doss stressed that law and order must prevail, while adding that the issue must be addressed in a spirit of reconciliation. “First and foremost we must ensure that law and order prevails. A complaint has been made and it must be addressed accordingly,” he said. “But we must also find out why the seeds of distrust and suspicion were sown in this instance. Why was one group agitating? What was upsetting them? And why was another group harassed as a result? We must initiate a dialogue and listen to the different voices in this in a spirit of reconciliation,” Rev. Doss added.

“The head of the Methodist Church noted that there was no involvement by other religious groups in this particular incident. “No monk is involved in this,” he said.”

Meanwhile, Legal Adviser to the Methodist Church Mr. Ravindranath Dabare said the attackers had violated the Constitution and the Penal Code, while adding that the police had failed in their duty to uphold the law. “The attackers violated Article 14 of the Constitution which grants all citizens the freedom to practice a religion. The attackers also breached Section 290 and 291 of the Penal Code, making their behaviour a criminal offence. So once a complaint is made under such circumstances, the police must arrest the suspects and present them in court,” he said. “Also Bishop Asiri Perera was forcibly kept under house arrest by the attackers, and he had to call the police to be freed. This amounts to an illegal arrest, which is also a criminal offence. So when the police arrived at the scene they should have arrested the offenders, but they failed to do so,” Mr. Dabare added.

In the context of the violence and intimidation faced by the Kumbichchikulama  congregation, and the police inaction in the face of these events, Bishop Perera especially urged President Maithripala Sirisena, Prime Minister Ranil Wickremesinghe, Opposition Leader Mahinda Rajapaksa and the Inspector General of Police (IGP) to ensure that peace and harmony, justice and equality, prevails for everyone in Sri Lanka.