Local Government Elections in Sri Lanka and Lessons to be Learnt 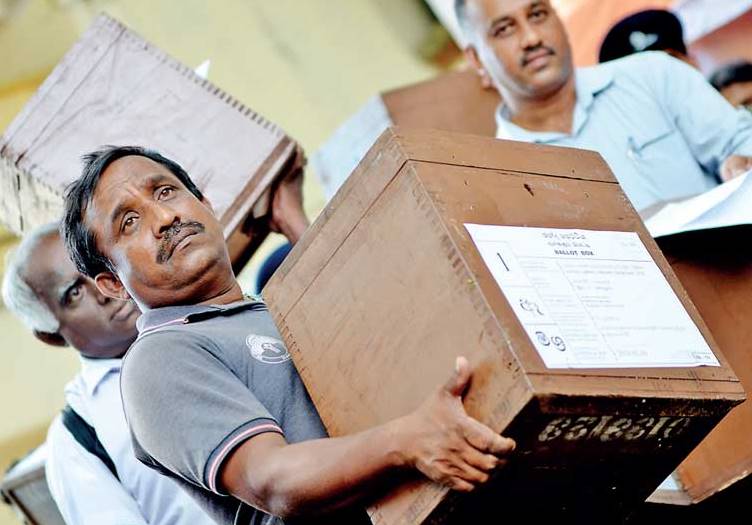 The political turmoil and the prolonged period of uncertainty in Sri Lanka that followed the February 10 local government elections appear to have subsided, but the urgent measures needed to address its causes are yet to be taken. If those causes are to remain in the coming years, the future of the current regime and the country could be doomed for a long time to come. It is no secret that since coming to power, the two main parties in the regime have been trying to out manoeuvre each other. There is no evidence yet that this has ceased, unless the President separates his political functions as the leader of the Sri Lanka Freedom Party (SLFP) and the United People’s Freedom Alliance (UPFA) and his constitutional functions as the head of state, while the Prime Minister stops relying on his classmates as the sole people who are capable and skilled.

During the local government elections, the leaders of the regime were on a suicidal mission; with the President, in particular, attacking his Prime Minister from the United National Party (UNP) on corruption whilst being silent about massive corruption of other politicians. The opposition in the guise of Sri Lanka Podujana Peramuna (SLPP), meanwhile styled its campaign as a referendum and based it on creating an irrational fear of an imminent threat of division of the country through a non-existent but yet to be developed constitution.

It is unprecedented and extraordinary in Sri Lanka’s history, for a President with the support of the opposition, to go on an all-out campaign to sack his Prime Minister, thus plunging the country from one political crisis to another. These attacks went on until the President found out that under the 19th Amendment, he cannot sack a Prime Minister from office.

The origins of this crisis go back to the immediate aftermath of the 2015 Presidential Elections. The leaders of the new regime discarded their ‘good governance’ message and its promises. The leader of each of the two major parties wanted to undermine the other for an opportunistic power grab for their respective parties. The process commenced almost simultaneously with the Prime Minister making arbitrary decisions on state and major fiscal appointments (of course with President’s concurrence) and the President launching his campaign to take over the leadership of his Party.

Nevertheless, due to the subsequent poor Election results, the ministerial portfolios were expanded to more than hundred ministries with many of those who had worked against ‘good governance’ policies as well as some of those whom the people rejected at the elections being included. The decision-making process of the regime became cumbersome and unnecessarily slow, thus hindering effective governance.

This was an ideal environment for corruption to escalate. Both leaders and others of the regime appear to have intervened in bending judicial procedures for the many, who had allegedly been directly involved in massive corruption rackets and atrocious and heinous criminal activities during the last decade or so. This has become an open secret in many circles of the elite. The government postponed local government elections for two years under various pretexts.

While the opposition at the macro level made the local government elections into a so-called referendum, at the micro level, they engaged all the beneficiaries of economic inducements during the time they were in power to canvass votes of the villagers. Religious places had allegedly been used to canvass against a non-existent new constitution on the pretext that it will pave the way for the division of the country. Despite the SLPP’s previous avatar, the UPFA promising to change the constitution through a Constitutional Assembly and to work towards reconciliation. The ruling parties not only failed to counter the false propaganda and the electoral strategy of the opposition, but also did not convey any positive message for the people to follow through.

The local government election results have been interpreted in many ways. As a single party the United National Party lost almost 13 percent of the total vote. However, if all the parties that contributed to the regime change in 2015, the non-opposition political entities have lost about four percent, but maintained almost 55 percent of the vote. Whatever the interpretations are, the government was elected in 2015 for a five-year period with a mandate to remain in power till 2020. The local government election results do not annul this constitutional fact. The regime reflected a continuation of the past in terms of corrupt and discriminatory practices. On top of this, if the parties in the regime themselves cannot practice reconciliation, what can one expect in terms of reconciling the country.

Yet, most will agree that despite the many teething issues of the new electoral system, the election itself was a reasonably peaceful affair. The election commission was not unduly pressurised or manipulated when conducting its independent work. It was also observed that the security forces acting independently without any political interference resulting in people exercising their freedom. The Police also conducted to a large extent, their duties maintaining their independence. Elections for six Provincial Councils are scheduled to be held in September this year. If the parties in the regime have learnt any lessons from their experience, they should not make any attempts to postpone them.

The need for the remaining period of this regime is to practically demonstrate their renewed political commitment to good governance and reconciliation. The progress on reform and reconciliation in almost all areas was sluggish, despite enacting certain legislation like the Right to Information and the Office of Missing Persons and appointing members to independent commissions established under the Constitutional Council. Yet, the appropriate legislation are yet to be implemented by providing sufficient resources. The Commissions appear to be more window dressings rather than with any teeth that bite.

The government, if it wishes to survive any future challenges, has to change its modus operandi by recommitting itself to fearlessly and unbiasedly carrying out its 2015 election pledges. The pledges made in terms of handling corruption and criminality, making government service provisions more accessible and efficient, allowing the economic benefits to flow onto the grass roots and implementing anti-discriminatory measures to ensure fairness and equity. Reconciliation and constitution making can only progress on a consensual basis, but by challenging the false propaganda head on and defeating it from influencing the society at large.

We of the Australian Advocacy for Good Governance in Sri Lanka (AAGGSL) call upon the government to fulfil the pledges it made in 2015. Even some of those who voted for the opposition would not oppose a political solution through participation and consultation to build a general consensus in society. The government was elected to power to address the concerns of the people and to fortify good governance, democracy and rule of law. This needs steadfast commitment of the political leadership to handle issues of corruption and criminality, to making the services of state institutions more easily accessible and efficient and to making demonstrated efforts for taking care of the marginalized in the Lankan society. Unless the current regime differentiates itself from the previous ones by adhering to democratic, ethical and equitable practices and rule of law and constitution, citizens will continue to rebuke and castigate it in the future. We urge the government to pursue the constitutional amendment process as a matter of urgency.