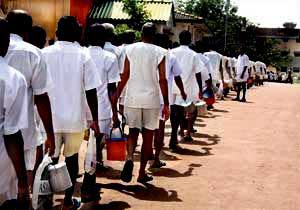 In a joint letter to President Rajapaksa and Chief Justice Jayantha Jayasuriya Civil society groups in Sri Lanka have called for a  comprehensive and holistic approach in deciding the prisoners to be released in the face of Covid 19.  “Taking into account the severity and nature of the offence, we appeal for a comprehensive and holistic approach, encompassing existing measures as well as special emergency measures, such as through special court hearings, administrative reviews and presidential pardons, where relevant and appropriate. In implementing these procedures, we urge you to also make public, in the interest of transparency, the criteria used to undertake the assessment of prisoners to be released and the number of prisoners in each category so released.” the letter has emphasised.

Re: Releasing Prisoners to prevent spread of COVID-19 in prisons

We welcome the announcement of the formation of a committee to discuss the release of prisoners and de-congest prisons, which is crucial to prevent the spread of COVID-19 in prisons.

Given the severe overcrowding of prisons with minimal sanitation and health facilities, they could be very vulnerable to the spread of COVID-19. They are also places where inmates are unable to practice preventive measures recommended by health experts, such as social distancing and hand washing with soap, as water and soap are not freely available to prisoners. Further, it is not possible to lockdown prisons due to the staff leaving and returning to prison. De-congestion and other measures are also important to calm the fears of prisoners and prison staff about COVID-19 infections. Such fears have led to unrests in several prisons, leading to deaths and injuries reportedly due to shooting in the Anuradhapura Remand Prison. There have also been COVID-19 related unrests and deaths in prisons in other countries, such as India, Colombia and Italy, which point to the potential for prisons to become hotbeds not only for the infection to spread but also for unrest and violence.

We are also aware that more than 50% of the prison population in Sri Lanka are remand prisoners, and that a large number of the convicted prisoners are those who have defaulted on paying fines. Further, the denial of bail for minor, bailable offences, inability to meet bail conditions and lengthy waits for trials to commence and conclude are also reasons for prison overcrowding. Prison Department statistics also indicate that existing schemes, such as “home leave” and “license scheme” have worked well, and hence current bureaucratic delays in implementing them should be addressed.

On 16th March 2020, the Committee for Protecting Rights of Prisoners (CPRP) appealed to the President, the subject Minister and the Commissioner General of Prisons to consider releasing prisoners to de-congest prisons to prevent the spread of COVID-19, suggesting some specific measures that could be taken based on the Constitution and the Prisons Ordinance1. We hope these will be considered in your deliberations and wish to share some additional suggestions to develop a comprehensive criteria for prisoner release, ahead of the announced meeting for today, 26th March 2020. In particular, during your deliberations we request that you take into account factors of vulnerability, such as those suffering terminal or serious illnesses, the elderly and children living in prison with mothers.

[alert type=”success or warning or info or danger”]We further request the Judicial Services Commission, headed by the Hon. Chief Justice, to consider and implement measures regarding granting of bail set out below to reduce prison overcrowding and prevent the spread of COVID-19.[/alert]

Taking into account the severity and nature of the offence, we appeal for a comprehensive and holistic approach, encompassing existing measures as well as special emergency measures, such as through special court hearings, administrative reviews and presidential pardons, where relevant and appropriate. In implementing these procedures, we urge you to also make public, in the interest of transparency, the criteria used to undertake the assessment of prisoners to be released and the number of prisoners in each category so released.

1. Avoid detaining persons in police stations unless absolutely necessary. 2. Release as many as possible on police bail.

Release the below categories of persons:

4. Grant bail to those who have been remanded for bailable, minor and non-violent offences, especially those who may not have had adequate legal representation.

5. Release on bail those who have been unable to ask for bail / plead guilty and pay a fine as their cases have been postponed due to restrictions on court work since last week.

6. Pardon and release those imprisoned due to the inability to pay fine.

7. Early, unconditional release of those who have been sentenced to less than six months.

8. Early and unconditional release of those who have less than six months of their sentence remaining.

11. Those who have been detained for prolonged periods. In the event, these persons do not have the means to obtain accommodation in the community, provide suitable accommodation for them.

In the current context, we request you, in consultation with the National Child Protection Authority and the Department of Probation and Child Services, to also review and release persons held in detention centers for youthful offenders, and detainee women and their children in Methsevana, Gangodawila.

12. Taking into consideration the nature and seriousness of the offence, the judiciary to review and consider for release on bail: a. Persons who have been remanded for many years without being indicted, and those whose trials have been on-going for many years; and b. Those with pending appeals. 13. Release women with children under the age of 5 living in prisons with them. 14. Where relevant those with sentences of less than 2 years should be released through the use of community-based correction orders. 15. The Attorney General to expedite decisions on sanctioning bail for detainees held under the Prevention of Terrorism Act (PTA).

In view of the stoppage of visits to prisons by families and others, we also propose:

– Prisoners are provided alternative supervised communication systems (e.g. phone) to facilitate prisoner’s communication with families and alleviate stress, trauma and fears of prisoners, families and prison staff. Some measures have already been suggested and are in the public domain.2 – Additionally, given that due to the stoppage of visits prisoners will not have access to personal hygiene products, such as soap, toothpaste, and sanitary napkins, we call upon the Department of Prisons to be provided financial resources to purchase and provide the same to prisoners.

Prisoner releases in the context of COVID-19 have been taking place and are being planned across the world, such as in Iran, Bahrain and USA. Earlier this week, courts in India and Pakistan have made decisive interventions in this regard. In particular, we note the Delhi High Court’s directive last Monday to implement proposed de-congestion measures “immediately, preferably within 2 days” and appeal to you to recognize the increasing vulnerability of COVID-19 spreading in our prisons every minute release is delayed. In the public interest we urge you to finalize the criteria and start implementing releases by the end of this week.

In addition to the releases, we recommend that the Department of Prisons formulate a protocol in consultation with the Ministry of Health to monitor and identify infections in prisons, as well as measures to quarantine and provide medical treatment to those with symptoms. Additionally, awareness programmes on preventing COVID-19 should be conducted for prisoners and prison staff

and the latter, especially those working in prison medical centres/hospitals should be provided with the necessary personal protective equipment.

Should any further detail and/or clarifications be needed we could provide them readily through Mr. Senaka Perera, Attorney-at-Law, who would be available at any time on 077-2817164 / 071-4453890.