Let’s stand together; Death threats will not deter us –FMM 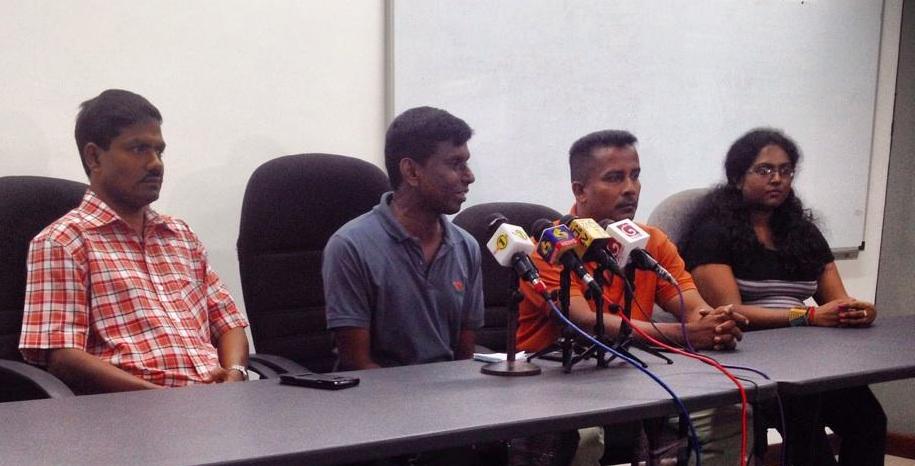 We, the Free Media Movement (FMM) and  Sri Lanka Tamil Media Alliance (SLMTA)  are here to day to inform you about the harassments faced by out fellow Tamil media journalists yesterday and today (26 July).  Sri Lanka Journalists Association, the Muslim Media Forum, Sri Lanka section of the SAFMA are unable to present here today but they all have endorsed this press conference.

Before going to the main topic I would like to inform you about another threatening development. It was only two hours before We, the FMM informed media institutions about this press conference. One hour after we informed the media I received a  call form caller ID hidden phone and asked  my name. I introduced myself. Then in a threatening and clear voice I was told that if FMM go ahead with this press conference they will not allow me to live. The voice said clearly  that I will be killed.

Sri Lanka human rights activists and independent journalists have been living with these kinds of threats for long years now. We know the situation is dangerous and the gravity of these threats. We are holding this press conference today knowing very well this situation.

Last night around 1.30 am 16 Tamil medium journalists form Jaffna were on there way to Colombo to attend a training workshop. They were checked by a group in military uniforms on two occasions and on the second check point they were detained allegedly having Cannabis (Ganja) in their procession. Later they were released and allowed to proceed to Colombo.

We have come to know that a person called Sogha behind this incident. According to our information this person goes with code name Sogha is either related to or a member of the security forces.

This is a continuation of suppression of media freedom in Sri Lanka and we all should stand together in condemning these dastardly acts.  This is the third time in recent times Tamil journalists were prevented by disruptive elements together the  security forces, attending training workshops in the South of Sri Lanka.

Training is a necessary in order to practice good journalism. Then why Tamil Journalists in Sri Lanka is prevented in obtaining more skills in their profession? Who is behind this insidious scheme?  We want the government to find out answers. If not naturally it is the government will be held responsible.  This is the first message we like to deliver today.

Secondly this is an another instance, which shows that post war Sri Lanka has failed to usher promised peace and democracy. Today we even do not have the rights we enjoyed during the war.

If we do not stand together and oppose these violations of peoples rights we too will beheld responsible for this degeneration.  Even the Information Department which is duty bound to protect our rights have become a puppet of the Ministry of Defence.  It keeps a complete salience in the face of harassments and intimidations faced by media and journalists today.

We like to tell the government and security forces not to violate our rights as journalists. Security forces have their own duties so please leave us alone to carry out our profession.

We like to reiterate that we are not naïve and know very well that threading situation we face today. The Free Media Movement will face the challenge together with the other press freedom organizations in the country.