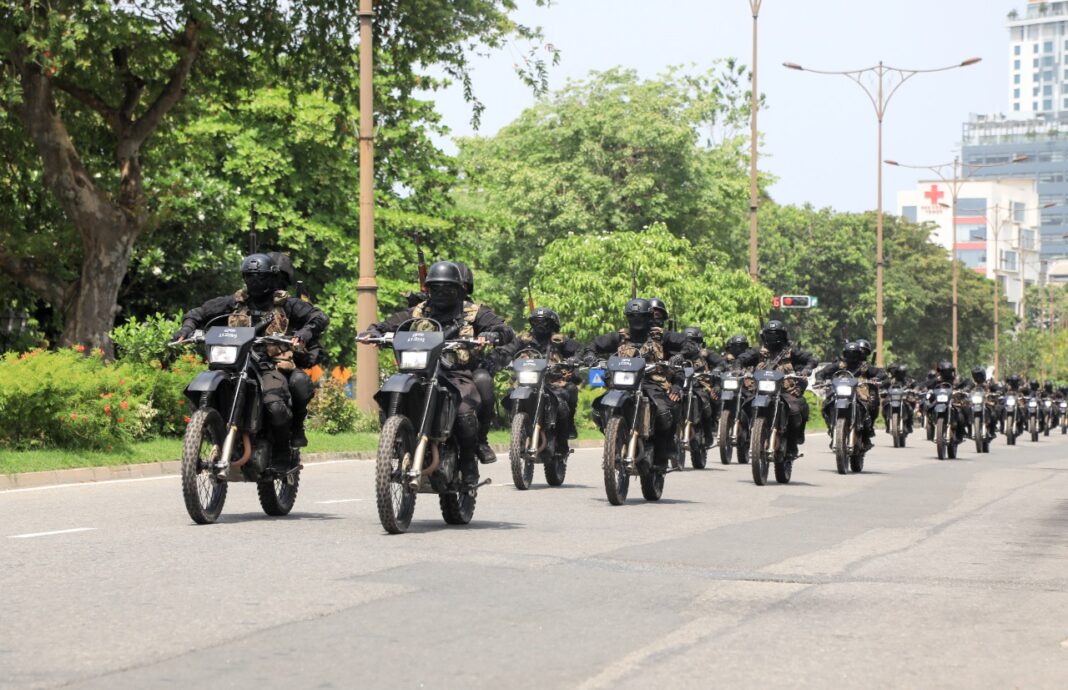 Image: Rajapaksa propagandists and political puppets created a false fears that the Army being called up in the capital was a harbinger of a military regime.

The International Network for Democracy in Sri Lanka (INSD) strongly condemns Ranil Wickremesinghe’s betrayal of the struggle that captivated the hearts of the people of Sri Lanka, which had gone on for nearly two months, just when it was on the verge of victory. This is indeed a betrayal that would go down in history.

What is worse is that to accomplish this betrayal, Ranil Wickremesinghe used the brutal violence that was unleashed by political hounds instigated by the Rajapaksas on the peaceful protest.

The INSD also condemns the violence that ensued after the attacks on the peaceful protestors and holds the Rajapaksas primarily responsible for that too.

The acceptance by the  UNP leader Ranil Wickremesinghe of the post of Prime Minister to save the Rajapaksas at a time when they were hiding in military and naval bases in fear of the people’s struggle and unable to form a government of their own would undoubtedly mark the greatest political betrayal in the country’s history. Gotabhaya Rajapaksa would have had no choice but to resign if the momentum of the general strike, called by the trade unions to join the youth-led mass struggle, continued for several more days.

In such a situation, it is the Rajapaksa propagandists and political puppets who created false fears that the Army being called up in the capital was a harbinger of a military regime. The current global political situation, the acute economic crisis facing Sri Lanka and geopolitical realities do not provide the situation necessary for a military government. The plan to bring in Ranil Wickremesinghe as the saviour of the Rajapaksas was no doubt well planned. The struggle’s main slogan, ‘Gota Go Home,’ symbolizes the need to re-democratize Sri Lankan society. We are in general agreement with the demands made by the stakeholders in the struggle to hold the bloodthirsty political class in this country, which has fattened itself through corruption and terror, accountable and to bring about democratic socio-political reforms. Ranil Wickremesinghe accepted the post of Prime Minister by signing a blank paper without imposing any conditions relating to the people’s struggle on the Rajapaksas. The Rajapaksa-Wickramasinghe alliance seeks nothing but to repress the people of this country while protecting the privileges of the corrupt political class. All intelligence services and police bureaus which the Rajapaksa regime had filled with its political thugs will continue under Ranil Wickremesinghe. The Gotabhaya-Ranil regime will provide immunity to the Rajapaksas and punish those who have joined the people’s struggle. We emphasize that the resignation of Gotabhaya Rajapaksa is a key condition for resolving the socio-economic and political crisis facing Sri Lanka. We express our solidarity with all the socio-political forces that make that demand.

In this context, we extend our fullest support and bestow blessings to the people of Sri Lanka to move forward more vigorously on the path of non-violence to make Sri Lanka a civilized country in which the rule of law prevails and the rights of all communities are protected.