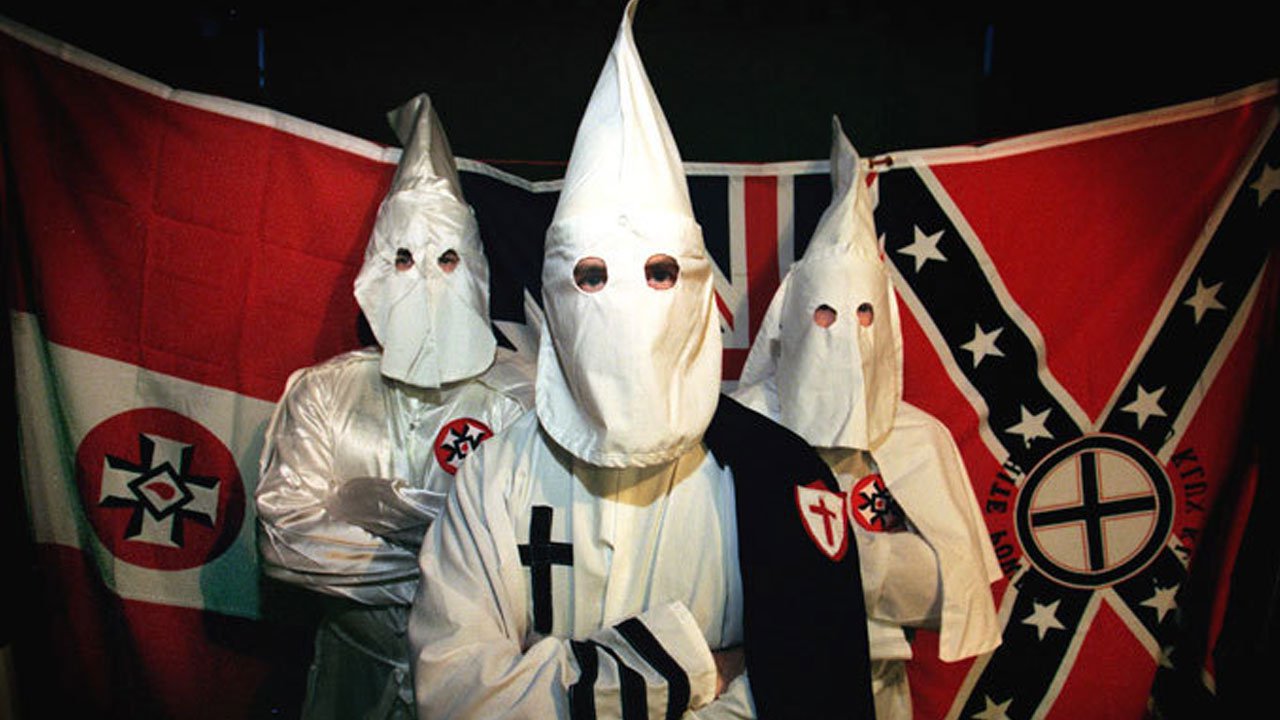 Image: US NATIONALISM: The Ku Klux Klan existed in the US long before the Shiv Sena and Bodu Bala Sena latter stages of the first wave of nationalism that swept the world and culminated in Nazism.

Nationalist hate is once again rising in the West, as shown by Brexit and Donald Trump amid an economic downturn while Sri Lanka is taking time off from minority bashing, but how long this ascent to human decency will last is anybody’s guess.

Already the nationalists are coming out and pointing to the Trump victory to justify hate and discrimination. A Muslim owned clothing store had apparently been set on fire, just like Jewish shops were burnt in Germany.

Monks that have spread Sinhala-Buddhist nationalism and hate are again making a comeback.

It is notable that in the US, evangelists backed Trump.

In the West the recent rise in nationalism may have been partly fuelled by the insistence on free trade in an economic downturn, by rational politicians and bureaucrats who treats everyone equally (read elites, the establishment) who knew the harm trade restrictions would create and delay an economic recovery.

Trade restrictions may have helped deflect public anger, though it prolonged the Great Depression and put more people out of work.

During the Great Recession, a conscious effort was made to keep free trade going, which helped prevent a greater meltdown.

But it was all grist for the nationalist mill.

While free trade stopped an economic melt-down like the Great Depression, it nonetheless gave a target or scapegoat for nationalists ride back to power.

Chauvinism, or the false idea that an ethnic, religious or other easily recognizable group – usually a majority – is superior to others, exists in all societies. Even caste divides are a type of chauvinism.

Discerning philosophers who studied the rise of nationalism in the West, where it originated with the popular vote, draw a distinction and say nationalism is goes beyond mere prejudice, class divides and bias.

Nationalism is the giving of political expression to chauvinist ideas through the law-making process of elections and parliaments that came up in the West from the 1860s.

The distinction is fine.

It is not the same as caste divides or slavery. Slavers or high caste people did not generally seek the elimination of such people in general. They were considered a valuable part of the economic system that prevailed at the time.

But nationalists want to eliminate the minority objects of their hatred (Jews, Muslims, minority groups) and reduce their population.

Unlike in the case of the popular vote, they had no incentive to engage in nationalism, though some did after being egged on by priests and monks.

Many just monarchs were loved by their commoner subjects, even so-called ‘foreigners’ (example Elara in Sri Lanka).

The high point of nationalism was National Socialism of Germany, a variation of fascism that swept Eastern Europe as feudal Empires, such as the Austro-Hungarian Empire broke up and the democracy (more correctly the popular vote) came in.

The European nationalism generally targeted Jews based on existing prejudices against the community by Christians. But others including and then Slavic people were also targeted by ‘Aryans’.

The targeting of minorities is easier during an economic downturn. In the 1920s the Marxist-socialist Weimar Republic of Germany collapsed with the country burning in hyperinflation with excessive money printing and as well as socialist interventionism after Germany lost World War I.

Hitler’s nationalists blamed the Jews for the World War II defeat calling it the ‘stab in the back’. Jewish bankers were blamed for the economic crisis, the same echo is seen in Donald Trump’s rants against ‘International Bankers’.

During Brexit it was foreign migrants that were blamed for job losses at home.

One of the first acts of Hitler after coming into power was to stop migration and deny citizenship to Jews, (regardless of whether they spoke German, or was born in Germany or not). Hitler himself was an Austrian. Trump’s wife Melania is an immigrant.

Trump himself is of German descent his mother was a Scottish immigrant.

In Eastern Europe, it was the mass media and freedom of expression – brought by liberals who broke the Monarchical rule – that allowed nationalist hate to be spread.

Now it is much more sophisticated. The internet based Breitbart news is the latter day Der Angriff or Völkischer Beobachter.

The implication is that the US (which is recovering from burst credit bubble and is still arguably the most powerful and innovative country in the world which attracts immigrants including most Nobel Laureates, despite the slightly socialist policies of the Obama administration) was better and stronger in the past and there is a need to re-create the lost historical place.

It is hauntingly similar to Hitler’s desire to create a Third Reich (realm), which also sought to ‘Make Germany Great Again’. The first Reich was the so-called Holy Roman Empire.

The basic premise was to make a Christian-German nation, though all Christians who questioned minority bashing including Catholics and Lutherans were progressively suppressed.

Like the way liberal Sri Lankan followers of the Lord Buddha says Nationalist hate is un-Buddhist, Christians who stayed true to the values of the religion said that Nationalism was un-Christian. Americans say that Trumpism is un-American.

The first Reich is the Holy Roman Empire, which was a real empire and not a nationalist one. The second Reich is the German empire 1871-1918 which was unified along linguistic lines.

However Sri Lanka’s Atheetha Sri Vibuthiya was less nationalist than now, since Monarchs had no incentive to engage is such tactics though inter-sectarian Buddhist conflicts did occur from time to time.

Under a monarchy or an Empire, it is necessary for priests and other nationalists to get the ear of the king and ministers to suppress a minority. It is not easy.

The nationalists have to sometime work through a child of the king and poison his mind. But instant results can be got through the European-style popular vote.

With the popular vote it is easy for a few urban nationalist ‘intellectuals’ push the agenda to the uneducated masses, especially to those who have no idea about liberty. It is not for nothing that whites without a college education are the biggest supporters of Trump, while the originators of the ideas are themselves urban, college educated whites.

There were also slaves that opposed abolition, just like Sri Lankans opposed neo-liberalism, which gives only half-baked types of freedoms compared to classical liberalism.

In the US, blacks were not a target of Trumpism. They were targeted with Jim Crow laws at one time.

But now public opinion is stronger against targeting people of colour. It is not ‘politically correct’ to target blacks. However Trump has made racially tinged remarks about voter fraud in ‘inner cities’, a reference to black areas.

In Sri Lanka in recent years Muslim were targeted. Like blacks in America it is less hip to target Tamils now.

In the immediate after math of independence it was Tamils who are targeted through the parliament.

At the moment Sri Lanka has an administration which came to power on improving freedoms for all communities.

But the latent nationalism in Sri Lanka is alive and well. It is politically correct to refer to Sri Lanka has a Sinhala nation or a Buddhist nation rather than just Sri Lanka.

There is an unwritten ‘Jewish paragraph’ so widely accepted that it is a ‘law’ by custom, that a non-Sinhalese or a non-Sinhalese Buddhist cannot be the leader of Sri Lanka.

There is strong opposition to making the country a secular state. In state schools in Sri Lanka from a young age, kids including are taught nationalism.

Organizations like the American Civil Liberties Union are yet to come. Education about Nazism is not part of the syllabi in schools.

European history is not taught, despite the country using a deadly European political system bestowed upon the citizenry by Western liberals like is automatically prone to the ‘tyranny of the majority’.

No one is taught that ‘democracy’ is dangerous or as Alexis de Tocqueville said that a decision which “bases its claim to rule upon numbers, not upon rightness or excellence” could be irrational.

While chauvinist and nationalist or tribal ideas are latent and always present, more people can be persuaded to believe them and disregard during an economic downturn.

The so-called elites (British PM David Cameron, EU Mandarin, the Washington establishment, Republican leaders) know that closing borders would worsen the economy, or at least make a country grow below its potential.

Already US capitalist businesses are warning Trump not to restrict trade.

If Obama administration was less socialist, if the new regulations did not strangle the banks, the US would have been doing even better. A key target of the Trump campaign for example was Obamacare.

Trump is coming with a promise to scrap banking and other regulations.

Europe is lagging behind due to much tighter regulation, than the US.

The current government’s flirting with Marxism and excessive interventionism bodes ill for a strong economic take-off. While the budget has sought to reduce the deficit, it is being done with more taxes being taken from the people to pay higher salaries to state workers.

Even that may not do too much damage.

What is damaging however are the Soviet-style price controls, regulatory bodies for new areas, Chavez-style reforms proposed for privatized plantations and Rajapaksa-like taxes on imported television dramas to name a few.

The plantations break up is coming in the wake of expropriation practised by the Rajapaksa regime and retrospective taxes by the current administration.

For country seeking private investment these is highly damaging and is direct blow to a central economic plank of the current administration – that of drawing foreign direct investment. Instead of breaking up plantations, they should be de-regulated to allow foreign investments.

Moves that reduce investor protection, economic interventionism and a regulatory Raj will provide fertile ground for nationalists to rise up and convince a public that is suffering from perceived and real economic hardships.

This column is based on ‘The Price Signal by Bellwether’ published in the December 2016 issue of the Echelon Magazine. /EN