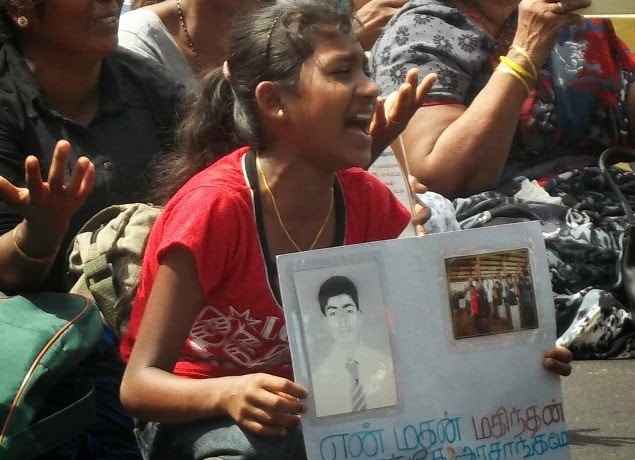 Lawyers in Colombo working on a Fundamental Rights case, have released a translated text of the letter written by 13-year-old Vipooshika on what happened to them on 13 March 2014 and in the continued detention. The details given by her confirms the earlier reports of alleged trap set by the SL military Establishment and the reports of assault and intimidation. The letter further establishes how the Judicial Medical Officer (JMO) in Vavuniyaa cooperated with the Sri Lankan military establishment to intimidate the women.
TamilNet releases the un-edited text given to legal activists in Colombo by the lawyers representing the mother and the daughter:
After having lunch at about 3.30 pm when Vibushikka was at the door a stranger wearing maroon color T shirt and black trouser carrying back pack stormed into the house saying “if you shout I will strangle your neck”.

Both mother and daughter came out of the house shouting for help.

Just at the time 4-5 men in uniform came through the gate and the women told these persons that there is a stranger inside. One of the uniformed men went inside and after a while they heard a gun shot. The uniform man came outside with the stranger without any injury and without any apparent hurry.

Thereafter other 2 uniform person also went inside. Only at that time both women became aware that large force of armed army and police personnel had surrounded their house.

Thereafter both women were taken to the joining land but the mother was permitted to lock the house. Only then that they realized that the household goods had been ransacked and the entire contents of almirahs and cupboards including jewelery boxes put on the ground.

Out on the adjoining land the mother was intimidated to give some information which the mother stated she did not know.

She was abused, insulted and assaulted by the uniform people and they were taken by army jeep. There were no women police or women army personnel to accompany the two women and were taken the Kilinochchi police station where they were interrogated. They were not given any refreshment of food for the night.

At about 11o’clock the mother and daughter had been chained by one and same hand cuff. The child was threatened several time tell the truth and the mother was hit with boots. Mother was also held by the heir and hit on the face.

The daughter fell a sleep 1 am but interrogation of the mother continued till morning.

At about 8 am the daughter was separated from the mother and was questioned separately.

At around 7 pm were taken to Kilinochchi and produced before the Kilinochchi acting Magistrate at about 10 pm.

Thereafter the mother was permitted to be taken to Vavuniya TID and the daughter was handed over to the Probation department with the direction that she be admitted to Kilinochchi Hospital and to be produced in the Magistrate court of Kilinochchi on 17. 03. 2014.

On 17. 03.2014 the court handed over the custody of the daughter to a children home. The mother is reported to be in the custody of TID at Boosa detention Camp.