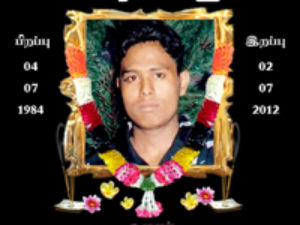 Justice denied: The denouement of Sri Lanka’s Nimalaruban case By the Social Architects

The Sri Lanka Supreme Court on Monday dismissed the case of Ganeshan Nimalaruban, a Tamil prisoner who died in suspicious circumstances days after he was involved in a prison riot last year.
Mr Saliya Peiris, Attorney-at-Law representing the parents of the deceased Mr Nimalaruban yesterday told the Court that the document which was given by the State Counsel (a document from the Commissioner General of Prisons) on the last occasion does not disclose the circumstances under which the death took place. It merely narrates facts, but does not say how Mr Nimalaruban sustained injuries, nor does it disclose who the material witnesses were.

At the very beginning of the case – even before listening to Counsel, the Chief Justice (CJ), Mohan Peiris, stated that this application must come to an end. He went on to mention that lawyers also have a responsibility to the country, that just making these kinds of applications (accusing prison officers of wrongdoing) will encourage more inmates to get involved in prison riots and will send the wrong message.

The CJ said that “If children are brought up well, they won’t be involved in these types of activities.” He then blamed the Petitioner (Mr Nimalaruban’s father) for bringing up his child in this manner. The CJ also mentioned that – during the riot – the Magistrate of Vavuniya had climbed over the wall and asked the prisoners to stop rioting – but that the prisoners ignored this request. The CJ went on to mention that, at that stage of the incident, prison authorities needed to use some type of force to quell the riot and rescue the prison officers who had been taken hostage. He then reiterated that Mr Nimalaruban was already a heart patient, and that that is what caused his death. At this point, Mr Peiris pointed out that there were two causes of death, one of which was blunt force trauma.

In addition, the CJ stated that, when he was a State counsel, he appeared in a case where a shop owner had slapped his employee and that the employee fell down and died of shock. But that the shop owner could not be accused of murder.

In another case the CJ mentioned that a lady who drove a car towards the White House was shot to death by security officers. The CJ wondered, “Why couldn’t he have shot at the tires? This is the way that security is being maintained. We can’t blame the security officers.” The CJ went on to state that these things happen even in the USA, a country which sets the standard for other nations.

The petitioner’s counsel repeatedly stated that, in the document which was given by the State counsel, there is only one line which mentions that Mr Nimalaruban was responsible for the events which transpired on June 28, 2012. Yet, in that same document, no information was provided about his cause of death.

The petitioner’s counsel subsequently stated that, in the inquest proceedings, neither the Vavuniya prison officers nor the other prisoners had been called as witnesses. Furthermore, there was no evidence before the Court to support the view that the injuries had been caused in the process of quelling the riot. He stated that the question was whether the injuries – there were more than 20, including an arm fracture – were sustained when the riot was quelled or whether, after the conclusion of the riot, Mr Nimalaruban was subjected to torture.

Mr. Ganeshan Nimalaruban was was arrested in 2009 and held without charge until the time of his death. He was involved in a riot in Vavuniya prison on June 28, 2012. He had participated in taking some prison guards hostage and holding them overnight. They were freed by a rescue operation on June 29, five days before his death. During that time, he suffered severe injuries and was subsequently transferred to Mahara prison. Shortly thereafter, he was admitted to Ragama Hospital, where he died. Following his death, the Government of Sri Lanka (GoSL) initially refused to release his body or allow him to be buried in Vavuniya, his hometown, citing national security concerns.

The case went to the Supreme Court. Mr. Nimalaruban’s body was subsequently released and his burial was held in Vavuniya. A quintessential custodial death, this case has drawn the attention of both domestic and international observers.