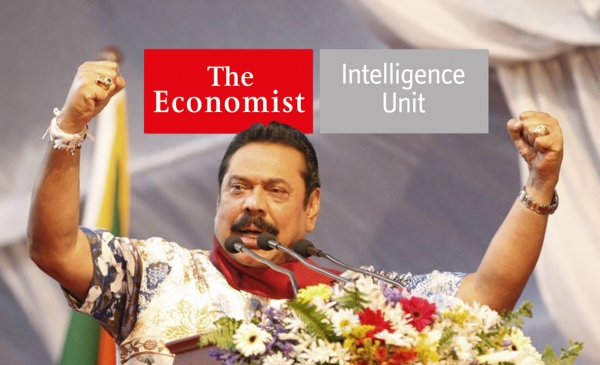 Economist Intelligence Unit (EIU), in its latest report, has forecasted that the party backed by former President Mahinda Rajapaksa will win the next Presidential and Parliamentary election.

The country report on Sri Lanka, generated as premium content by the London based international research outfit on September 10, forecasts on a wide range of subjects in political and economic sectors.  The report primarily focuses on the period between 2018 and 2022 during which Sri Lanka is expected to see two crucial national elections.

The report says, “The next parliamentary elections are due in mid-2020. We believe that the SLPP will win the largest number of seats and form a government. The party’s landslide victory in the February 2018 local elections was testament to its popularity and indicates strong anti-incumbent sentiment. Tensions within the ruling coalition and inefficient policymaking will make it difficult for either the UNP or the SLFP to regain public confidence.

Mr Sirisena may run for a second term at the presidential election in 2020, assuming that the government is not able to deliver on its promise to enact a new constitution, which would bar him from running for another term. Following the passage of the 19th amendment to the constitution in 2015, the former president, Mahinda Rajapaksa, cannot run for the presidency, but the post of prime minister is open to him. We expect a close associate or relative of Mr Rajapaksa to contest and win the presidential election. The pro-Rajapaksa camp has been gaining political momentum, and Mr Sirisena had only a thin margin of victory over Mr Rajapaksa in 2015. Therefore, even a slight shift in voter support would be enough to enable a candidate from the pro-Rajapaksa camp to be elected president.”

The report says although the government is likely to serve out its full term, which ends in 2020, its weak level of control in parliament will hinder policymaking.

“We expect progress on bringing in planned constitutional change to take a back seat amid the growing political uncertainty. The government’s focus will instead shift to holding onto power after the 2020 elections. Partly because of this, we believe that constitutional reform will not be passed during the coalition’s current term,” it added.

The report also predicted that disagreements within the ruling coalition to persist during the remainder of its tenure, which would make it even harder for the SLFP and the UNP to find common ground to form another coalition after the next parliamentary election.

“However, the government will still be able to implement sufficient reforms to ensure the continued disbursement of funds from the IMF’s extended fund facility (EFF), which is scheduled to end in June 2019,” it said.